Freshwater mussels, also known as clams, are unique animals. Mussels have two hard, external shells and soft tissue inside. They also have only one foot! The movement of mussels is limited. Most mussels stay in one place for their entire lives, but some mussels use their single foot to move around on the riverbed.

Just like us, mussels have a heart, kidneys, a stomach, and a mouth! Like fish, mussels also have gills. The gills of mussels help these animals filter water. Mussels survive by taking in water, keeping microorganisms and nutrients for food, and releasing water back to the river cleaner than it was when it first entered the mussel. Mussels feed by filtering water, but filtering water also means that mussels are highly vulnerable to pollution. High concentrations of pollution, bacteria, and sediment in rivers make mussels sick and can kill off entire populations of mussels. A river that is unable to support healthy populations of mussels usually indicates that the river has poor water quality. HEALTHY MUSSELS, HEALTHY RIVER!

Mussels also have this amazing and unusual lifecyle that includes fish as a host. Glochidia (or mussel larvae) attach themselves to the gills of fish, where they develop into juvenile mussels before detaching into the stream or river. This process does not do any harm to the fish. Mussels have to “go fishing” in order to get fish nearby to release the glochidia for attachment. To attract fish, mussels have developed very ornate lures that resemble small prey fish. Take a look at the videos below to see the amazing lures of the Plain Pocketbook and Wavyrayed Lampmussel, two common mussel species found in the Tippecanoe River.

Learning about and conserving mussels are essential activities for preserving the health of our waterways. One way humans measure our health is by checking our hearts. Mussels are like the heart of a river. A single mussel can pump up to eight gallons of water a day. Please explore the rest of our site so you can keep the Heart of the Tippy beating.

The Tippecanoe River and Freshwater Mussels

The Tippecanoe River was once home to the world’s largest population of clubshell mussels, but due to human-caused water quality degradation (nonpoint source pollution from industrial sites, fertilizer runoff from agricultural production, and excess siltation from development), the clubshell mussel now has a very small population in the river.

Six species of freshwater mussels, including the clubshell, that live in the Tippecanoe River are federally listed as endangered or threatened under the Endangered Species Act. Federally listed means that these species are imperiled and some could become extinct. The mussels are protected from “take,” which includes killing, harming or harassing.  The U.S. Fish and Wildlife Service administers the Endangered Species Act and ensures that listed species are protected.

Uniqueness of the Tippecanoe River

In addition to endangered mussels, the Tippecanoe River is also home to over 40 non-listed species of freshwater mussels, many fish species, and a variety of wildlife. The river is one of the healthiest in Indiana and The Nature Conservancy lists the Tippecanoe River as one of its top ten rivers in the nation most in need of preservation.

The Tippecanoe River is dammed in two locations, about 12 miles apart in the city of Monticello. 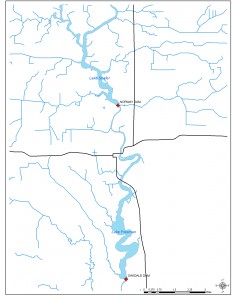 Lake Freeman and Lake Shafer and the location of the dams.

Dams disrupt the normal flows of rivers. Water becomes impounded upstream of the dams, creating artificial lakes. In Monticello, the impoundments of the river are called Lake Shafer (upstream of Norway Dam) and Lake Freeman (upstream of Oakdale Dam). 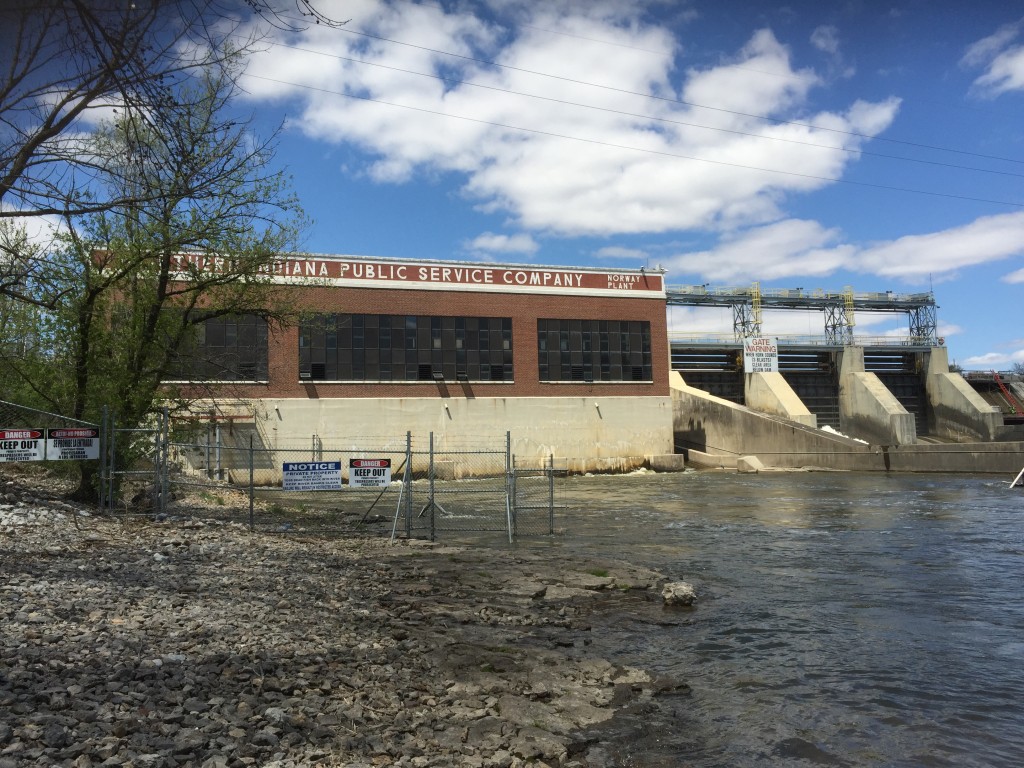 Norway Dam located at the outlet of Lake Shafer.

Lake Shafer hosts the popular amusement park, Indiana Beach. Lake Freeman is decorated with many private homes and is popular for seasonal recreation, such as boating and fishing. Many local businesses depend on recreational activities in the lakes.

Sometimes we encounter challenges and conflicts while conserving endangered animals such as mussels. Changing weather conditions often cause fluctuations in the flow of the Tippecanoe River. In times of drought or abundant rainfall, water levels will vary, with impacts to river users and residents of lakeside communities.  To ensure the survival of endangered and threatened mussels in the Tippecanoe River, the U.S. Fish and Service has provided guidance to NIPSCO to avoid take of federally listed species by maintaining natural run-of-the-river minimum flows downstream of Oakdale Dam and eliminating large fluctuations in those flows during times when mussels are most vulnerable.

For information about managing federally endangered and threatened species in the river visit http://www.fws.gov/midwest/endangered/clams/index.html.  Related information is also available at:

For more information about mussels:

What is a mussel?

Forestry and Natural Resources 715 West State Street, West Lafayette, IN 47906-2061, (765)494-3531
©Purdue University | An equal access, equal opportunity university.
If you have trouble accessing this page because of a disability, please contact the Webmaster at fnrweb@purdue.edu.