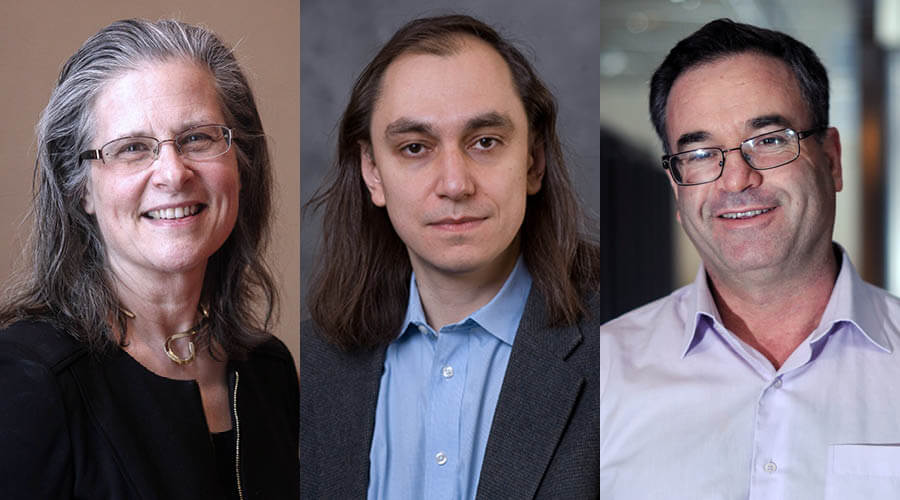 The Office of the Executive Vice President for Research and Partnerships congratulates the following people for their recent awards, honors and achievements.

Three Purdue professors have been chosen to receive the University’s most prestigious research awards.

Shelley MacDermid Wadsworth, a professor of human development and family studies in the College of Health and Human Sciences, will receive the 2019 Lu Ann Aday Award for exceptional work in the humanities and social sciences. Wadsworth, who is also director and co-founder of the Military Family Research Institute at Purdue, is being recognized for her conceptualization and development of a series of outstanding, innovative scholarly works of research on military and veteran families. She will present the Lu Ann Aday Distinguished Lecture at 10:30 a.m. on Oct. 28 in Stewart Center’s Fowler Hall.

Evgenii Narimanov, a professor of electrical and computer engineering in the College of Engineering, will receive the 2019 Arden L. Bement Jr. Award for significant accomplishments in pure and applied science and engineering. Narimanov, who is also a faculty member in Birck Nanotechnology Center in Purdue’s Discovery Park, is being honored for pioneering the concept of hyperbolic metamaterials in the field of nanophotonics. He will deliver the Arden L. Bement Jr. Distinguished Lecture on Oct. 28 at 1:30 p.m. in Fowler Hall.

Sabre Kais, a professor of chemistry in the College of Science, will receive the 2019 Herbert Newby McCoy Award for outstanding work in the natural sciences. Kais, who also has courtesy appointments in the Department of Physics and the Department of Computer Science, is being recognized for his creation of novel quantum computing algorithms for chemical calculations and the formulation of finite size scaling algorithms for assessing the stability of atomic and molecular systems. He will deliver the McCoy Distinguished Lecture at 3:30 p.m. on Oct. 28 in Fowler Hall.

Mara Faccio, the Duke Realty Chair in Finance in the Krannert School of Management, recently won the William F. Sharpe Award for Scholarship in Financial Research for the best papers published in the Journal of Financial and Quantitative Analysis in 2018. The title of the paper is “Taxes, Capital Structure Choices, and Equity Value.” Faccio and co-author Jin Xu, a former Krannert faculty member, also won the Sharpe Award in 2015 for a paper titled “Taxes and Capital Structure.” The Sharpe Award recognizes researchers who, through their articles published in the Journal of Financial and Quantitative Analysis, have most contributed to the understanding of important areas of financial economics. (JP)

Chris H. Greene, the Albert Overhauser Distinguished Professor of Physics and Astronomy, has been named to the National Academy of Sciences, one of the highest honors given to a scientist in the United States. He was one of 100 new members to the academy, announced in April. Greene was elected for his scientific work. His research interests includes ultracold few-body and many-body quantum systems, electron-molecule collisions and dissociative recombination, ultrafast laser interactions with atoms and molecules and novel Rydberg molecules and multichannel Rydberg atoms.

Aniket Kate, an assistant professor of computer science, has received a CAREER award from the National Science Foundation. CAREER awards are the organization’s most prestigious awards given to junior faculty who embody the role of teacher-scholars through research, education and the integration of those concepts within the mission of their organizations. Kate received the CAREER award for his project, “Towards Privacy and Availability of Inter-blockchain Communication.”

Terese Marie Mailhot, visiting assistant professor in the Department of English, received the Blue Metropolis First Peoples Prize in Montreal, Quebec, Canada. The aim of the $5,000 prize is to increase national and international exposure to writers from indigenous communities. She was honored May 4 in Montreal.

Nancy Marchand-Martella, the Suzi and Dale Gallagher Dean of the College of Education, was one of 19 people selected as a fellow for the 2019 Impact Academy by the Deans for Impact. Scheduled to begin in July, the yearlong fellowship is for leaders of educator-preparation programs with a focus on preparing the fellows for transformative change and improving their programs for preparing future teachers.

Clarence Maybee, an associate professor with Libraries and School of Information Studies, has received the 2019 LIRT Librarian Recognition Award from the Library Instruction Round Table of the American Library Association. The award was created to recognize an individual’s contribution to the development, advancement, and support of information literacy and instruction. Read more.

Vijay Raghunathan, a professor of electrical and computer engineering, was selected as one of five recipients of the Under-40 Innovators Award, sponsored by the Association for Computing Machinery and the Institute of Electrical and Electronics Engineers. Raghunathan is the director of the Embedded Systems and IoT Lab, which he founded in 2006. Read more.

Fabio Ribeiro, the R. Norris and Eleanor Shreve Professor of Chemical Engineering, and director of CISTAR, has been selected to receive the 2019 Giuseppe Parravano Memorial Award for Excellence in Catalysis Research. He was to receive the award during the 40th annual Michigan Catalysis Society Spring Symposium on May 7 at the Henry Ford Museum in Dearborn, Michigan. More information can be found here.

Chris Uyeda has been named a Camille Dreyfus Teacher-Scholar for 2019. He was one of 13 chosen this year by the Camille and Henry Dreyfus Foundation for creating an outstanding independent body of scholarship and being deeply committed to education. The frontier accomplishments of these award recipients span the broad range of contemporary research in the chemical sciences. Each Camille Dreyfus Teacher-Scholar receives an unrestricted research grant of $100,000. Read more.

A study authored by Kelly Wilson, associate professor in the Krannert School of Management, has been selected as one of five finalists for this year’s Rosabeth Moss Kanter Excellence in Work Family Research Award. Ellen Kossek, the Basil S. Turner Professor of Management, was a co-author of the article, “Misery Loves Company: An Investigation of Couples’ Inter-Role Conflict Congruence.” The article was published by the Academy of Management Journal in 2018.

Three research teams will receive funding from Discovery Park through the Big Idea Challenge 2.0. The principal investigators and their winning proposals are Joerg Appenzeller, the Epstein Professor of Electrical and Computer Engineering and scientific director of nanoelectronics in Birck Nanotechnology Center, “Solving Problems Previously Reserved to Quantum Computing with Purdue’s P-Bits and How These Future Computational Capabilities Will Impact Security, Politics and the Society as a Whole”; Rainer Fischer, visiting scholar of biological sciences, “Revolutionizing the Development and Manufacturing of Next-Generation Biologics”; and Bridgette Tonnsen, assistant professor of psychological sciences, “From Cell Cultures to Community Cultures: Bringing Precision Health to Autism.” Read more.

Faculty members were recognized in May at the Faculty Awards Convocation for a range of faculty honors, including national and international awards; University and college awards; Fellow awards; and distinguished and named professorships. A full list of the national, international and college awards is available here. The awards are listed by the categories of teaching, research and scholarship, leadership and engagement.