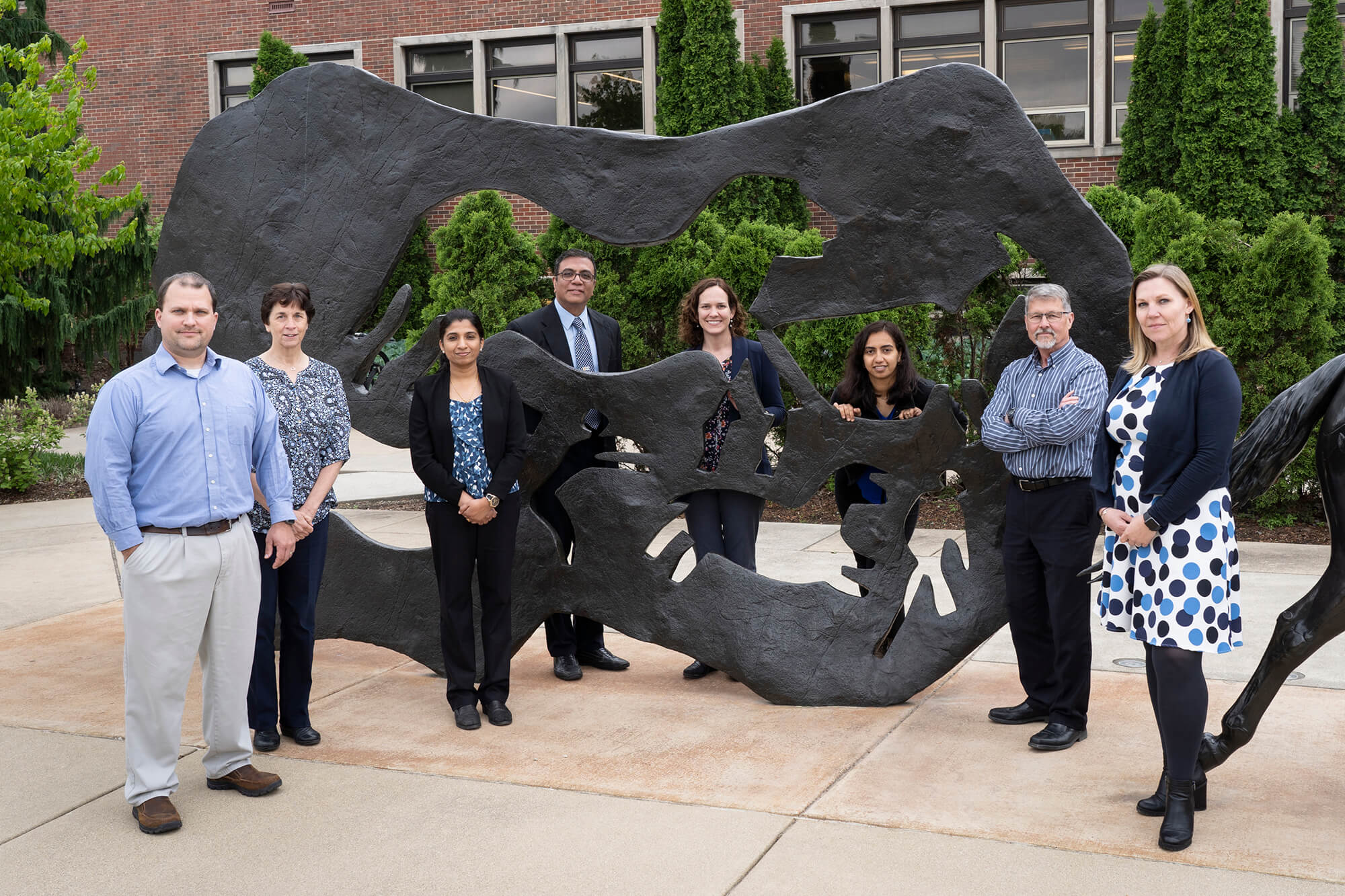 Audrey Ruple and her team. Photo by Vincent Walter.

Tracking the spread of drug-resistant superbugs is crucial for identifying the causes of antimicrobial resistance and preserving the efficiency of antibiotic treatments.

Audrey Ruple, an assistant professor of veterinary medicine, is developing a surveillance system using data science to monitor the spread of resistance and ultimately help prevent outbreaks of superbugs. Her work is being funded in part through Purdue’s Integrative Data Science Initiative.

“In 2017, there was a woman who came back to the United States after traveling in India who ended up dying of a bacterial infection that was completely insusceptible to any of our current antibiotics,” says Ruple, who is also a member of the Purdue Center for Cancer Research and the Purdue Institute of Inflammation, Immunology and Infectious Disease in Purdue’s Discovery Park.

Her team’s research views the health of humans, animals, and their environment as a whole using the approach of the international One Health Initiative. As a One Health epidemiologist, Ruple studies the distribution of diseases at the intersection of ecosystems. She warns that without a better understanding of how antimicrobial resistance spreads across ecosystems, antibiotics could eventually become ineffective for treating bacterial or other parasitic infections.

“The whole point of this is to prevent antimicrobial resistance and preserve the ability to treat bacterial and parasitic infections,” Ruple says. “We’re using a novel approach to understand something that impacts the public, their children and elderly, as well as their pets and environment.”

Although some believe that the prevalence of superbugs could be caused in part by the use of antibiotics in livestock, Ruple points out that there is not enough evidence yet to support this idea. Her team’s project will help clarify whether this is the case and whether the current antibiotic approach for livestock could be altered to be safer for people.

Aaron Ault, a senior research engineer for the college of electrical engineering and co-investigator for the project, is a livestock farmer himself.

“I have 3,000 head of beef cattle myself, and I deal on a daily basis with sick cattle that various antibiotics don’t work on anymore,” Ault says. “Livestock farmers often get the blame for antibiotic resistance, and that’s one of the questions data science will help us better understand, because our only alternative is letting the animals die by not giving them antibiotics.”

After collecting data from an extensive number of geographical sources in Indiana, engineers on the team will develop a monitoring framework integrating human, animal, and environmental sources. Then they will use machine learning algorithms to search for patterns in the data for clues about the drivers of antibiotic resistance.

“The idea of machine learning is that we have this algorithmic black box into which we feed data, either with an explicit target in mind or as a means to search for unknowns. The algorithm then uses this data to adjust its own numbers in ways that improve its predictions. In the end, it produces a finely-tuned algorithm that is beyond the ability of a human to design,” says Ault.

The research project was one of eight selected for Purdue’s Integrative Data Science Initiative, which promotes interdisciplinary collaboration across campus in develop solutions to real problems. The project’s nine team members include electrical engineers and six veterinarians with specialties in parasitology, microbiology, and bacteriology.

Ruple emphasized that the project brings plenty of learning opportunity for the team members, as veterinarians learn about data science and electrical engineers learn about the biology behind the data.

“I think the big surprise we’ve had so far is just recognizing how integrated our knowledge can be even though it seems really different,” Ruple says. “I didn’t think there would ever be a point in my career when I would be working with electrical engineers, but every conversation I have with them is one of learning and discovery and recognizing the ways we can help each other.”

The Integrative Data Science Initiative is unique among universities in that it encompasses Purdue’s entire campus. It aims to connect resources and expertise in different disciplines to promote research that will solve real-world problems. Projects focus on areas such as healthcare and will be funded for a period of two years. The initiative is hosted by Purdue’s Discovery Park.

“This is a global problem needing to be solved, and data is one of the best tools we have in the fight.” Ault says. “If there are readers out there who have data sources they’d like to be a part of this, they can contact Audrey Ruple and we’ll work to get that data integrated.”

Collaboration is essential for the project’s success. Although the Purdue team will start their project in Indiana as they develop and test their framework, they hope to work with the international One Health group to eventually expand beyond the state.

The initiative “is something really unique about Purdue,” says Ruple. “It’s the way they’re going about it – not just drawing people out of their specialized box, but really integrating knowledge across the university. I think that’s awesome.”