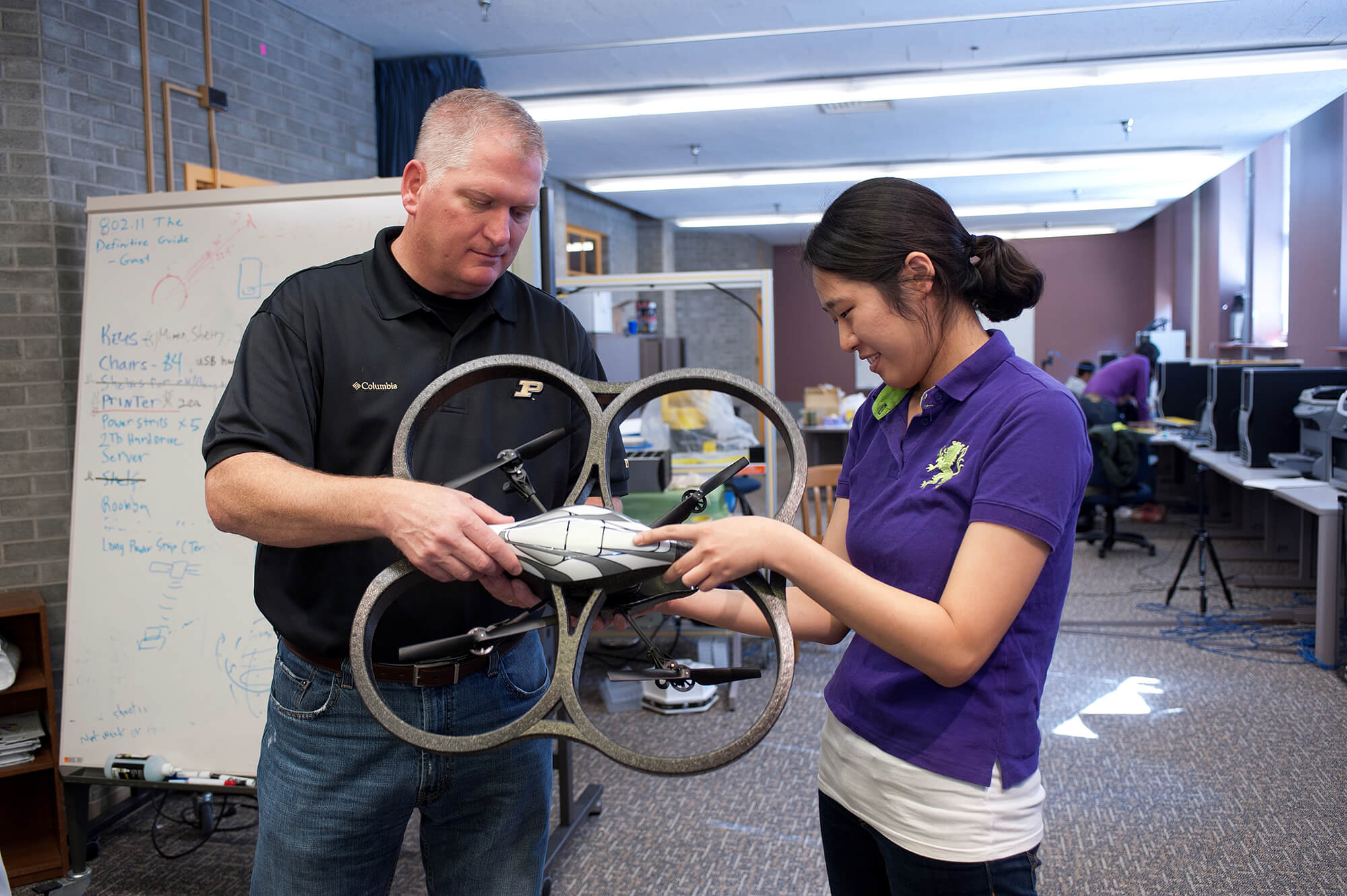 Eric Matson has long studied the potential threats that unmanned systems — whether the commercial drones anyone can buy at retailers or online, or the growing fleet of autonomous cars and trucks — pose to security. Photo by Mark Simons.

In early August, Venezuelan President Nicola Maduro was speaking at a public event when two unmanned aerial vehicles laden with explosives flew through airspace near where he was standing.

One drone crashed, causing an explosion. A small panic ensued, and seven Venezuelan national guard members were injured. It is believed to be the first drone attack on a country’s head of state.

It’s unlikely to be the last, says Eric Matson, professor and co-founder of Purdue University’s M2M lab, who has long studied the potential threats that unmanned systems — whether the commercial drones anyone can buy at retailers or online, or the growing fleet of autonomous cars and trucks — pose to security.

Technological potential for both good and evil is why Matson has regularly spoken at Purdue’s Dawn or Doom conference, an annual event dedicated to exploring the risks and rewards of emerging technologies. Dawn or Doom ’18 will be held on the West Lafayette campus Monday and Tuesday, Nov. 5-6. The conference, now in its fifth year, is free and open to the public. This year, it’s part of Purdue’s 150th anniversary celebration. Visit the Dawn or Doom website for more information and a full list of speakers.

“Like any other technology, it’s easy to see the benefits,” Matson, says of drones and autonomous vehicles. “But there’s always someone out there who is looking to turn that technology into a weapon.”

Matson, who led a team developing the first autonomous anti-drone defense system in 2015, says the threat posed by drones has only grown since, as groups like ISIS have added them to their arsenals. With an increase in availability, sophistication and ability to carry heavier payloads, the potential of drones to cause harm has also increased.

“You get out of your car miles away from your target, program the drone to fly to a certain GPS point, and then crash,” Matson says. “Even with a small payload, there’s potential to induce a panic that could harm a lot of people.”

Even more concerning, says Matson, is someone taking the same approach with an autonomous vehicle.

“How simple would it be to load an autonomous vehicle with a bomb, and then send it to a crowded market or a busy intersection?” says Matson. “And if you look at companies like Lyft and Uber, who are trying to build their own autonomous fleets, it could be as simple as pushing a button on your phone to request a ride.”

Matson, who works to develop defense mechanisms and protocols against such threats, says the threat posed by drivers in suicide attacks around the world is amplified when the driver is removed from the equation.

“The limiting factor in attacks like that is finding the people who are willing to carry it out,” says Matson. “When you create a situation where you remove the driver from the car, you’re creating a system where the power is given to a machine that doesn’t know remorse.”

Dawn or Doom ’18 features four tracks: Machines, Mind, Body and Data. Featured speakers at the conference include Frank Pasquale, law professor at the University of Maryland who specializes in artificial intelligence law; Naomi Grewal, global head of insights at Pinterest; and Nicholas Carr, author of the New York Times best seller “The Shallows: What the Internet Is Doing to Our Brains.”