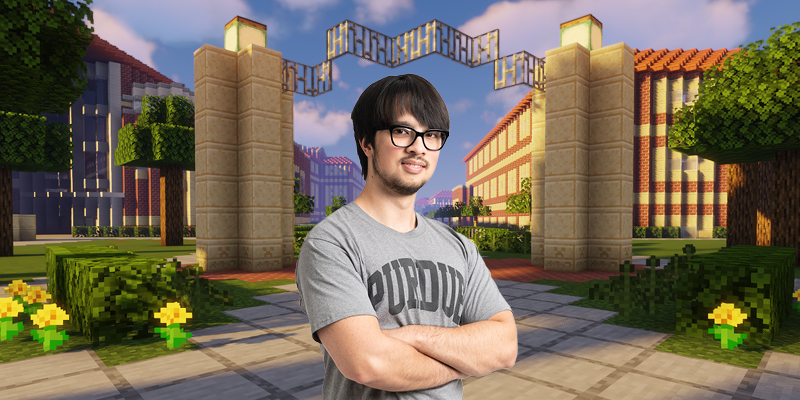 Any Boilermaker alumni could tell you that Purdue University’s campus is defined by the beautiful brick buildings, iconic fountains and bell tower. Now, a Purdue student is building his own version of Purdue's campus for the gaming generation in the world of Minecraft, making this No. 10 Best Public University in the U.S. accessible to all.

A senior in Purdue’s computer science program, Esteban Vicente-Paulino Richey has built Purdue’s campus inside of the popular video game Minecraft. First starting his passion project in 2019, 300 hours later and 3 million blocks placed, Richey has 52% of campus built within the game. He has finished many campus buildings north of State Street alongside Andrew Klotz, who helped build 30% of the project. The finished buildings include the Wilmeth Active Learning Center, the Class of 1950 Lecture Hall, Elliott Hall of Music, campus residence halls, Ross-Ade Stadium and even Purdue Mall, complete with the Class of 1939 Water Sculpture.

Minecraft was first released to the public in 2011. It is considered a “sandbox game,” where there are no specific goals to accomplish, allowing the player full freedom and creativity. The world of Minecraft consists of different cubes of materials called blocks, where the player can arrange and rearrange them to build scenes and structures. With over 200 million copies sold and 126 million monthly active users as of 2020, Minecraft is known as the best-selling video game of all time.

Richey’s love of Minecraft started when he was in middle school in Carmel, Indiana, and the game was first released. His family had a computer that couldn’t run the game at the time, but he could watch others play on YouTube. In 2013, his family got a new computer that could play Minecraft, and he has been playing ever since.

“I feel like Minecraft is now a generational type of game, that people around the college age have played or grew up with this game. It’s a game that a lot of people can get into easily, be creative and collaborate with others,” Richey says.

“I had never really visited Purdue before my first semester, but that fall, when I was getting used to the campus and my classes, I quickly fell in love with it,” he says. As a freshman, he joined Launch Campus Ministry and would spend time at its clubhouse on Waldron Street. That is when he got the idea to build that house in Minecraft.

“Because that was the first building I spent a lot of time in, I built it with great detail in Minecraft. All of my friends really loved it. So, after I made that, I thought, why not make the front yard and then the backyard and then the buildings across the street? That’s when I just kept building and expanding to what I have created today,” Richey says. “I also took a lot of inspiration from Purdue’s virtual tour maps and topographical maps to help me build and design the campus within the game to be recognizable as a whole.”

The most difficult part of building campus has been new buildings and structures as Purdue continues to grow. “It’s hard to keep up with the constant changes that happen around campus. If (Purdue President) Mitch Daniels could let me know when new buildings are coming up or being remodeled ahead of time, that would be great,” Richey says as he chuckles.

As a rising senior, Richey plans to take his giant leap as a computer science graduate in May and continue to work for RSA Security in the cybersecurity department, where he is interning now. He also plans to continue to build Purdue University in Minecraft.

“I love the way campus looks, and I love the people on campus and the fact that I have so many memories in all of the buildings I’ve built on here. It’s really fun, and it makes me excited to keep going. I thought that maybe I should stop once I graduate, but who knows, maybe I’ll continue and build West Lafayette as well,” Richey says.

If you play Minecraft, you can download the Purdue map file below to play.