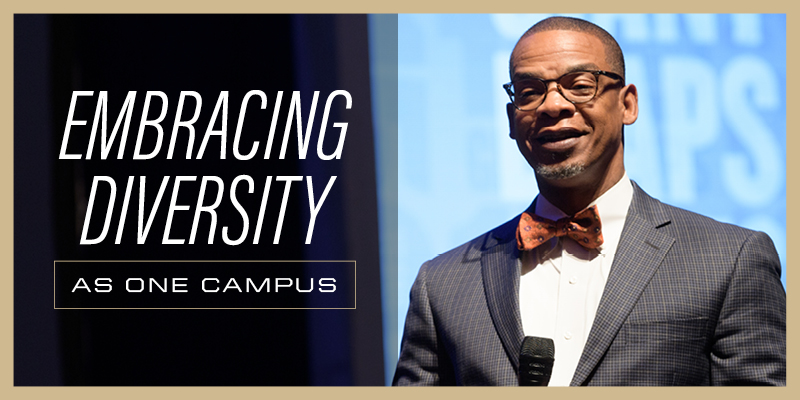 Diversity and inclusion in higher education are complex issues, and their successful advancement is often measured in small steps rather than giant leaps.

The task of addressing these crucial issues at Purdue University rests with John Gates, who joined Purdue in early 2019 as the Vice Provost for Diversity and Inclusion. He also serves as a clinical professor in the Krannert School of Management.

Prior to his appointment at Purdue, Gates served as the inaugural associate dean in the University of Virginia’s School of Engineering and Applied Science, where he was responsible for diversity, inclusion and engagement strategy. Gates, who was born in Gary, Indiana, previously held senior leadership positions at Harvard University, the University of Vermont and New York University.

As Black History Month is celebrated at Purdue and around the country during February, Gates spoke about his role, his goals, Black history at the University and much more.

Question: What is your role as Vice Provost of Diversity and Inclusion at Purdue?

Answer: My role consists of three primary buckets: faculty, student and staff success; recruitment and retention; and education and training. Between those buckets lie policies practices, climate and culture. So, my job is to support the University in creating and sustaining an environment where everyone, including those who are least served or marginalized, is able to thrive to their fullest potential.

Q: What impact do you hope to make?

A: I hope my impact is multifold, and that is the trajectory we’re on. Among the things that I hope my work accomplishes is to empower Purdue to live its values — values that exist in its founding roots — for everyone, including those who have historically been least served. I want to shift the mindset at Purdue concerning underrepresented minorities by moving from a deficit-focused framework to an asset-focused framework. We must remember that being a Black or brown or first-generation or rural or economically disadvantaged student does not mean that one is operating from a deficit. We do this by celebrating our students’ demonstrations of excellence and commitment as assets that fuel their journeys. Our job is to tap into those assets to help our students grow their potential and promise. It’s a different mindset altogether.

Q: What is your definition of diversity?

A: When I give talks around the country, I often ask groups to give me their definition of diversity and in no case has anyone spoken of race, gender, sexual orientation or religion. Instead, they say remarkable things about the value of diversity and its inclusive nature. However, in the process of operationalizing diversity, it is often boiled down to a set of fundamentals, the discrete aspects of difference that we can see and count. It is important to remember that diversity is far more complex than that.

My definition of diversity, and the operating definition within my office, is that diversity is excellence expressing itself through the intersections of perspectives and lived experiences. In this way, diversity is not exclusively the domain of people of color. It is the domain of all of us. My diversity — that which makes me who I am — is part of my excellence, and so, too, is yours.

Q: Since you arrived in 2019, which accomplishment are you most proud of?

A: I’m proud of many things. We’ve made tremendous strides with our scholarship, education and training programs. This academic year has been framed around pursuing racial justice together, and we are leading a community-wide conversation on that. But most of all, I’m proud of all of the small steps we’ve taken toward creating a climate and culture of full inclusion at Purdue.

Q: Do you see the Diversity Task Force as the next giant leap in creating a more equitable campus?

A: In Purdue terms, I would say that the Task Force is one critical step toward the University taking a series of steps that can lead to a giant leap. We’re still establishing the full contours of the plan, but we can expect that there will be an emphasis on supporting the success of Black students, faculty and staff. We stand ready to implement the plan in full. I expect that the result of the Task Force will drive part of my office’s work for the next several years, and that all parts of the University will come into play. We will focus very heavily on the recruitment, retention and experiences of Black Boilermakers. But I hasten to say that, as we do this, we will remain very cognizant of all populations at Purdue. We will leave no one behind as we create a better environment for Black Boilermakers.

Q: Why is it important to tell stories of our Black students, faculty, staff and alumni?

A: It is incredibly important for us to know our story so that we can value the space that we occupy. If people knew the history of Purdue as an early trailblazer in diversity, equity and inclusion, they’d be all the more proud of who we are today. We continue to learn about Black history at Purdue, and about the many Black alumni who are making tremendous impacts on society. I think it is important to tell these stories in order to acknowledge that ours is a noble history and one that is rooted in concerns for diversity, equity and inclusion. It is also important that our students, faculty and staff understand that they are creating history every day as they walk the grounds at Purdue.

I am keen to remind Purdue of its larger story, going all the way back to its founding. The work we do in diversity, equity and inclusion may be new for some, but for the University, it's actually been there from the very beginning. We were founded in 1869, shortly after the Civil War, at the same time that most historically Black colleges and universities were founded. And we were founded for a similar reason — to provide access and equity to the citizens of the state of Indiana, most of whom were farmers. For Black colleges, it was to provide access and equity to the children of freed slaves.

Purdue graduated its first African American student in 1890, six years prior to Plessy v. Ferguson, the Supreme Court decision that upheld the constitutionality of segregation. Throughout the century of segregation and into the years that followed, Purdue actively recruited African Americans into its graduate and undergraduate programs. Today, Purdue is the No. 1 producer of African Americans earning PhD degrees in chemistry, and we’re among the top producers of African American and Latinx PhD holders in mathematical and computational sciences. This is all to say that diversity and inclusion are in our roots, and that tradition continues today.

In difficult times, I can remember that I’m walking on hallowed grounds here at Purdue — grounds that were hallowed by Black and brown people who strove to be here and dedicated their lives so that I might find my way here. It’s important for me to remember that I’m standing on the shoulders of giants, and that my shoulders have to be broad enough for the next generation of giants to stand on. My Blackness means something at Purdue, because I know from whence I came.