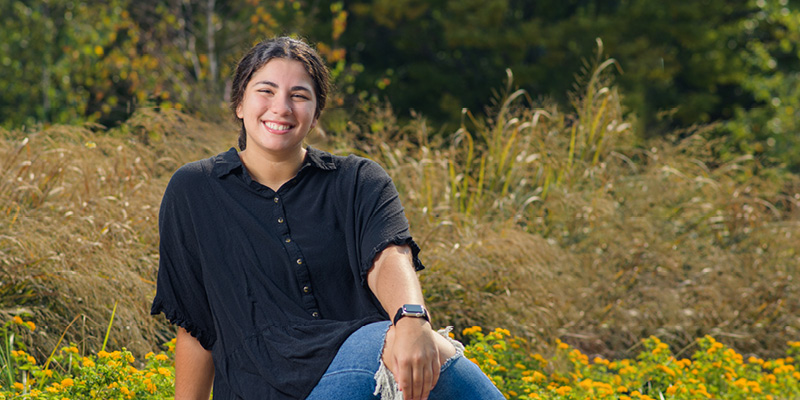 McKaya Simon is a third-year Degree-in-3 student at Purdue studying law and society. She prioritized affordability when selecting a college, and she will graduate from Purdue in May of 2022 with almost zero student loan debt and continue on to law school.

McKaya Simon knew early on that she would be paying for college herself.

As a student from a single-income household, Simon said that cost was easily the most important factor she considered. “I don't come from a wealthy family. I knew that it was going to be my responsibility to pay for my schooling,” she says.

Even though she had to keep affordability at the forefront of her mind, she still needed a school that offered great value and a rigorous educational experience.

Why? She had her sights set on law school.

“Law school is way more expensive than undergrad, so I needed to make the decision that was best for me financially,” she says.

She could have changed course and played it safe, but instead, she found Purdue’s Degree-in-3 programs. Now, she is in her final year at Purdue and is well on her way to making her dream of being a lawyer by age 25 a reality – and with “almost zero” student debt from her undergraduate education.

“I toured Purdue my junior year of high school, and I always knew that Purdue was in the back of my mind,” Simon says. She met with an advisor from the College of Liberal Arts who recommended Purdue’s law and society major, one of 55-and-counting programs in which Purdue offers a Degree-in-3 track.

Purdue’s Degree-in-3 programs offer the opportunity for students to complete their degree in three years, saving up to $19,000 in tuition and living expenses. Students can complete the three-year option with or without Advanced Placement credit or college credit by adding on summer sessions.

It was that same advisor who gave Simon a list of law schools after she had expressed interest in career paths relating to criminal justice.

“That was the first time I actually realized that law school could be a real opportunity for me,” she says.

Simon considered other universities, but Purdue was the only school on her list that had three-year programs. “The Degree-in-3 program was very interesting to me, especially if I was going to attend three years of law school,” she says.

Purdue was the least expensive option on her list. “Graduating with nearly zero debt is a big stress reliever,” she says. If she opted to pay off her “very, very small” loan now, she would join the 59% of Purdue students who graduate completely debt-free.

Simon didn’t have to compromise on value to keep costs down. The Wall Street Journal/Times Higher Education ranks Purdue seventh on the list of best value universities in the United States. Simon says, “I’m getting a great college experience.”

The day-to-day at Purdue

Now in her third and final year, Simon serves as the president of Big Brothers Big Sisters at Purdue. She is passionate about her work and looks forward to attending meetings every week. She also works as a restaurant server part time to cover her living expenses. She says her time-management skills are her biggest asset as she balances working, extracurriculars and taking a full course load. She’s used to the work, even as she dives into challenging, major-specific courses.

“The courses make me excited to become an attorney one day,” she says. Though she currently sees herself pursuing family law and child advocacy on a nonprofit legal team, she is open to exploring any paths that pique her interest.

To future Purdue students who are considering Degree-in-3 programs, Simon says, “You need to know early if that’s a route you’re going to do. Although it’s not necessarily a strict degree plan, it is a very planned-out degree plan. You need to decide by the end of your freshman year, maybe earlier. Don’t be scared of it. Even though it sounds like a lot, the benefits outweigh the amount of work it is, and you will have a bachelor’s degree done in three years, which is really cool. You will have saved some money, and you can start your career early or go into grad school.”

And to future college students who have no idea how they are going to pay for college? Simon says, “Apply, no matter what. You can get in and decide not to go, but if you don’t get in because you don’t apply, then you don’t have that option. Look into financial aid, file your financial aid forms and FAFSA, and look into scholarships.”