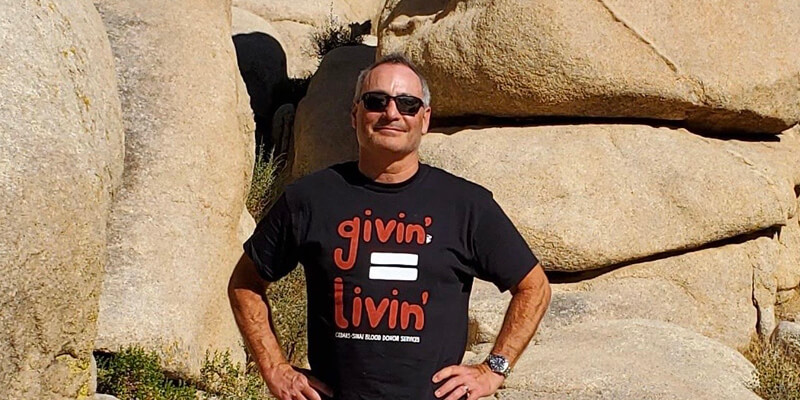 When you are an emergency room doctor working on the front lines of the COVID-19 crisis, where persistence and ingenuity are crucial, an engineering degree from Purdue University can be a powerful asset.

So says Dr. Moshe Engel, a 1984 Purdue civil engineering graduate who now works as an emergency medicine specialist in an area of Arizona that was once under siege from the pandemic and still deals with it today. Engel says he applies skills he honed as an engineering student at Purdue on a daily basis during this unprecedented struggle.

“My studies at Purdue taught me discipline, problem-solving and time-management skills,” says Engel, who received his medical doctorate from the Indiana University School of Medicine in 1993. “That, and a little common sense, go a long way when you’re making decisions in critical situations.”

Engel also credits his well-rounded Purdue experience, which included wrestling, working as a co-op student and participating in the University’s Hillel Foundation, for equipping him with the tools to manage his challenging career.

“My co-op experience with Bechtel Power taught me to be flexible and willing to pitch in any way that might help the team achieve its goals. This applies whether you’re checking electrical supports at a nuclear power plant or treating patients in an overloaded ER,” Engel says. “Being active at Hillel helped balance things on the cultural and spiritual side, and wrestling helped keep me mentally sharp and physically fit.”

Engel works 12-hour shifts, often as the only ER doctor on duty, at Carondelet Holy Cross Hospital in Nogales, Arizona. Nogales is in Santa Cruz County, which lies on the U.S.-Mexico border about 150 miles south of Phoenix.

As recently as late July, 23% of Arizona residents who had been screened for active COVID-19 infection tested positive, meaning it had the highest positivity rate of any state in the country. The rate in Santa Cruz County was more than double that (55%).

Arizona has experienced a recent drop in positive tests and critical cases. However, Engel has been working the ER since the beginning, when some hospitals were overrun with patients, critical supplies were scarce and the virus itself was somewhat of a mystery.

“We’ve been stressed but not overwhelmed. I actually contracted COVID-19 at some point, somewhere along the line, but never knew it,” Engel says. “Initially, volume dropped off precipitously, then picked up to the equivalence of a very bad flu season. There are a few hotspots here and there — that’s what you hear about on the news — but the average ER volume is down. I treat whatever comes through the door and transfer the sicker patients to larger facilities after they are stabilized.”

Engel’s path from civil engineer to ER doctor was unconventional — more a persistent pursuit of his life’s purpose than a giant leap from one discipline to the other.

The son of former Hillel director Rabbi Gedalyah Engel, Engel grew up in West Lafayette and originally wanted to study architecture. Since architecture wasn’t taught at Purdue, he chose construction engineering and management before switching to structural engineering. That led to his co-op with Bechtel, which resulted in a full-time job with the company.

After only a couple years at Bechtel, Engel took time off to travel and “reassess things.” He ultimately decided to become a doctor, which meant a return to school — and much more.

“I wanted to get some hands-on experience,” Engel says. “I worked as an emergency medical technician in the field and as an orthopedic technician in an ER, which led to some other amazing experiences, including ski patrol on the White Mountain Apache Indian Reservation in Arizona and then search-and-rescue at Yosemite National Park.”

Engel returned home for medical school and spent the first two years of his medical studies at Purdue at the IU School of Medicine’s West Lafayette campus. He met his wife, Halya, while he was doing clinical rotations in Indianapolis. They have three adult children.

“Looking back, I realize how lucky I was,” Engel says. “I was a hometown boy who actually had the luxury of living at home while at school, which made all my participation in other things easier. My engineering background helps me stay objective and look at the big picture without getting lost in the minutiae, and that applies to my career as well as my life.”