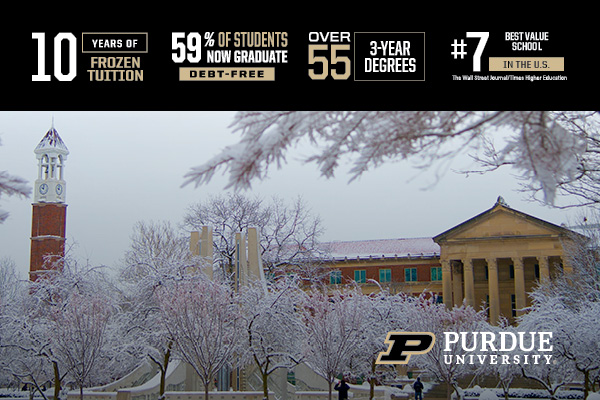 An innovative education that families can afford. That’s our giant leap

A fast-track degree program. A first-of-its-kind alternative to student loans. A free-credit program for Indiana high school students. A decade-long tuition freeze that is unprecedented in modern times.

These are just some of the bold steps Purdue University has taken in its persistent pursuit of affordability.

As total student loan debt in the United States has climbed over $1.5 trillion and the average borrower is saddled with nearly $33,000 in debt by graduation, Purdue’s institution-wide commitment to affordability and value has helped students and their families save more than $600 million since 2013.

This commitment also has sparked a significant increase in the number of Purdue students who graduate debt-free. In fact, 59% of Boilermakers now graduate debt-free compared with the national average of 39%. The University’s financial literacy efforts and affordability initiatives reduced annual student borrowing by $59 million between 2012 and 2020, and total student loan amounts are now below 2013 levels.

“Purdue has always been a standard-bearer for innovation, whether that’s in the classroom or through administrative policies,” says sophomore Jack Garner of Plymouth, Indiana. “The rising cost of college and the student debt crisis are one of the most important issues in society today. It’s an honor to be part of something so special and fairly unique to Purdue.”

After freezing tuition at the West Lafayette campus again and again and again, President Mitch Daniels announced in December 2020 that tuition will remain at 2012-13 levels — $9,992 for in-state students and $28,794 for our-of-state students — through at least 2022-23. Similarly, room and board rates at the West Lafayette campus have seen no increase since 2013, allowing Purdue’s rates to fall from the second most expensive in the Big Ten in 2012 to the most affordable among the league’s 14 colleges today.

This extension means that, by spring 2023, some 60,000 students will have graduated from Purdue having never seen an increase in their tuition rates — all while receiving an education considered among the nation’s most valuable. In all, students and their families will have saved more than a billion dollars on educational and living expenses by 2023, versus what they would have paid if Purdue had increased tuition and fees at Big Ten institution averages over the 10 years of the freeze.

Prospective students and college performance analysts alike have noticed Purdue’s persistence. After receiving a record number of applicants for admission to the flagship campus in fall 2020 — more than 55,000 — final enrollment set an all-time record at 45,869. CNBC recently ranked Purdue as the No. 4 public U.S. college that pays off the most. Purdue also is ranked as the No. 7 best value school by The Wall Street Journal/Times Higher Education.

“When I began exploring Purdue University, I was especially drawn to Purdue’s affordability and national recognition as a best-value school,” says 2020 graduate Joseline Aguilar of Crawfordsville, Indiana. “Plus, because the University continues to freeze tuition, attending Purdue today actually costs less than it did in 2012.”

Additional ways to save

“We said very early on that we believe strongly that our students and their families deserve a high-value education that they can afford and that we will fit our spending to their budgets — not the other way around,” Purdue President Mitch Daniels says. “Purdue is a national leader in the value of its degrees, and we intend to increase that value further.”