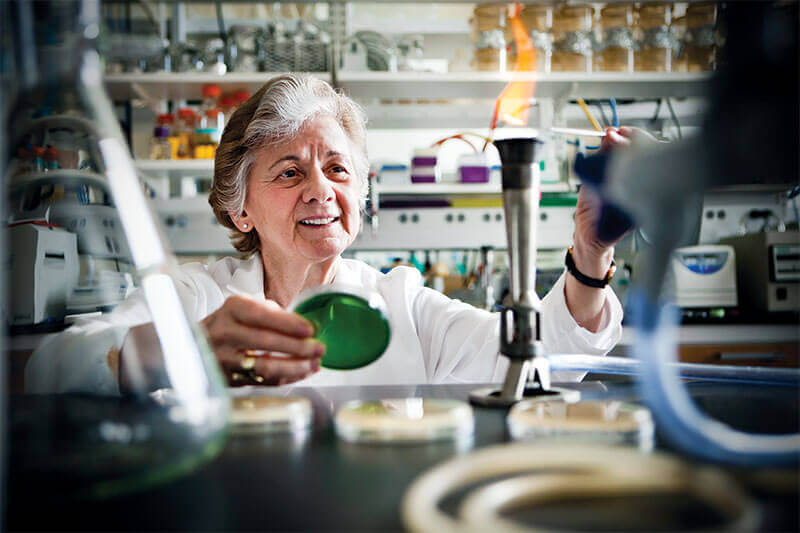 For decades, Purdue University has been known as the “Cradle of Astronauts” for the 24 alumni who have gone on to become pioneers in space exploration. And yet, few might know Purdue also has had tremendous success with its alumni or former administrators rising to the top role in managing the National Science Foundation.

With her two degrees from Purdue’s College of Science in the late 1950s and a doctorate in oceanography from the University of Washington, Colwell established an impressive career as a faculty member and researcher before her 1998 appointment as the first female director of the NSF, serving under Presidents Bill Clinton and George W. Bush.

“I guess you could say I’m responsible for the Purdue-NSF dynasty,” quips Colwell.

As the NSF’s 11th director from 1998-2004, Colwell was followed by Arden Bement, Distinguished Professor Emeritus of Nuclear Engineering and founding director of the Purdue Policy Research Institute, as the 12th NSF director and former Purdue President France A. Córdova, the 14th and current director of our country’s leading research enterprise.

During her tenure at NSF, Colwell championed the agency’s emphases on K-12 science and mathematics education, and increased the participation of women and minorities in science and engineering. Her policy approach strengthened core NSF activities and established support for major initiatives in nanotechnology, biocomplexity, information technology, social, behavioral and economic sciences, and the 21st century workforce.

“I think my time at the NSF was successful because, for one thing, I genuinely love science,” says Colwell, now the Distinguished University Professor at the University of Maryland and at Johns Hopkins University Bloomberg School of Public Health.

She is especially proud to have led the NSF through the greatest period of growth in its 50-year history. During her six-year tenure the agency’s annual budget surged by 67% to $6 billion — today, its budget approaches $8 billion. Colwell also made the case to hire 50 new staff members — the first additional full-time hires at the NSF in a decade — with support from her staff and an important figure in Purdue’s history: Mitch Daniels, who was director of the Office of Management and Budget from 2001-03 under President George W. Bush.

“I made it very clear to Mitch that this was not an extravagant number. He was very kind and polite and he said the request was reasonable but that he had to think about it,” Colwell says.

Before arriving at her next appointment, Daniels had contacted her office, saying he would advance her recommendation. In the end, Congress agreed to fund 25 of the new NSF positions. A few months later, Colwell proudly recalls Daniels characterizing the NSF during a National Press Club talk as the federal government’s “best-managed agency.” Adds Colwell: “So that’s history right there in itself.”

With more than 800 scientific publications and the author or co-author of 17 books, Colwell gained global recognition for her study of infectious diseases transmitted through water sources, particularly cholera, in developing nations. Unique to her role at the NSF, Colwell maintained a strong tie to her research and microbiology and biotechnology laboratory at the University of Maryland Biotechnology Institute in Baltimore.

“As a professor, administrator and researcher, Dr. Colwell has for decades brought new scientific knowledge to the world and renown to our University,” President Daniels says. “There is literally no alumna of whom Purdue is more proud.”

‘Purdue was Absolutely the Best Thing’

Colwell is convinced her career and academic accomplishments would not have been possible without Purdue and the College of Science’s academic rigor and commitment to undergraduate research activities.

That’s along with a full-ride scholarship she was awarded from Purdue, which sealed the decision over an offer from Radcliffe College, even with the savings she’d have by commuting the 45 minutes from her home in Beverly, Massachusetts, to Cambridge. It didn’t hurt that her sister, Yolanda Frederikse, was an art professor at Purdue at the time.

And she relishes special moments of her time at Purdue in West Lafayette:

She met Jack Colwell, a graduate student in physical chemistry, on a blind date at a Purdue fraternity party, and the two were married a few months later in Lafayette in 1956. She turned down medical school to follow Jack for graduate studies at the University of Washington, where they both completed their PhDs.

As a precocious undergrad, she asked President Frederick Hovde during a brief meeting with him in his office if he could write her a letter of recommendation to medical school. “He said, ‘Of course.’ And he did.” She was accepted at all three medical schools to which she applied. “That epitomizes his leadership at the time and a president who cares about the students,” Colwell says.

“Attending Purdue was absolutely the best for me. I became a scientist. I made excellent friends. And I’ve seen my university grow from 12,000 students to more than 40,000 students today,” Colwell says.

The recipient of 63 honorary doctorate degrees, including two from her alma mater, Colwell says she is honored to be asked to deliver the commencement address at Purdue in December. Giving a tease to her address, Colwell says she plans to tell the students: “You have to follow your heart; you don’t look to see what will make you fit for a job today. It’s what you love to do and what will keep you for a lifetime.”