Glyphosate-resistant 'superweeds' may be less susceptible to diseases 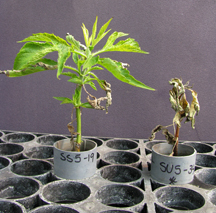 Purdue scientists found that soil microbes may play a role in how those weeds react to the popular herbicide glyphosate. Here, glyphosate-susceptible biotypes of giant ragweed react differently to the herbicide. The plant on the left is in sterilized field soil void of microbes, while the plant on the right is in unsterilized soil. (Photo provided by Jessica Schafer)

WEST LAFAYETTE, Ind. - Scientists searching for clues to understand how superweeds obtain resistance to the popular herbicide glyphosate may have been missing a critical piece of information, a Purdue University study shows.

Glyphosate, the active ingredient in the weed killer sold under the name RoundUp, is the most widely used herbicide in the United States, but some plants have grown resistant to it. This has caused farmers to turn to additional herbicides. While the mechanisms that have led to resistance are not fully known, Bill Johnson, a professor of weed science; Steve Hallett, an associate professor of weed science; and Jessica Schafer, a graduate student in botany and plant pathology, believe that soil microbes may play a role.

Most laboratory tests done to understand glyphosate resistance are done in sterile soil, void of those microbes. Schafer said Purdue's findings, published online early in the journal Weed Science, show that those microbes may play a significant role in how glyphosate affects plants.

"The soil you're growing the plants in is important to the results," Schafer said. "If we're growing in a sterile media, we could get some false positive results because the plants are more tolerant to glyphosate in those conditions."

Hallett and Schafer grew giant ragweed, horseweed and common lambsquarter in both sterile soil and field soil and subjected them to glyphosate. In each soil, strains of weeds both susceptible and resistant to glyphosate were tested.

Both versions of giant ragweed were damaged more from the glyphosate in field soil. The susceptible version of common lambsquarter was also more heavily damaged in field soil. Horseweed fared the same no matter which soil or strain - susceptible or resistant.

The results show that microbes can play an important role in the activity of glyphosate, presumably by invading the glyphosate-weakened plants. The results also suggest that glyphosate-resistant weeds may be more resistant to disease pressure as well.

"Soil microbes can be minor to major contributors to how glyphosate is able to affect plants," Hallett said. "We may be selecting not only for glyphosate resistance, but inadvertently selecting for weeds that have disease resistance as well."

A weed's ability to withstand glyphosate was based on dry shoot and root weight after testing. The sterile soil used in the study came from field soil exposed to gamma radiation to kill microbes and bacteria. The irradiated soil was tested to ensure that its nutrients were not diminished.

Hallett, Johnson and Schafer said further studies would look at how fungi in the soil affect root development, both with and without glyphosate.

"Dirt is a living organism," Johnson said. "It's important to know how all the pieces interact."

The research was conducted with internal funding from Purdue's Department of Botany and Plant Pathology.

In previous research conducted on non-weed species, the efficacy of glyphosate was shown to be greater in unsterile soils compared to sterile soils, and that soil microorganisms played an important role in glyphosate efficacy. Conducting greenhouse studies in microbe-free soil may, therefore, produce unreliable data, leading to erroneous conclusions. The objective of this study was to determine the effect of soil microorganisms on the response of glyphosate-resistant and -susceptible biotypes of three problematic weeds of the Midwestern United States: giant ragweed, horseweed and common lambsquarters. A greenhouse dose-response study was conducted on each of the three weed species grown in sterile and unsterile field soil, and the dry weight response of roots and shoots was measured. The three weed species responded differently to glyphosate when grown in the sterile and unsterile soil, that is, in the presence and absence of soil microbes. Soil microbes influenced the response of the susceptible and resistant giant ragweed biotypes and the susceptible common lambsquarters, but not on the tolerant common lambsquarters or either horseweed biotype. The different response of the three species to glyphosate in the presence and absence of soil microbes demonstrates that rhizosphere interactions are fundamental to the mode of action of glyphosate. These findings suggest that the range of tolerance to glyphosate observed in weeds and the evolution of resistance in weed biotypes may also be influenced by rhizosphere interactions. The soil media used in dose-response screenings to identify susceptible and resistant weed biotypes is very important. Unsterile field soil should be incorporated into growth media when conducting dose-response screenings to avoid false positive results. In addition, researchers performing glyphosate dose-response assays should be aware of these findings.