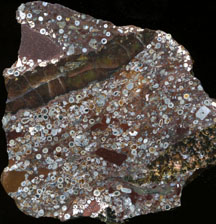 Researchers are learning details about asteroid impacts going back to the Earth's early history by using a new method for extracting precise information from tiny "spherules" embedded in layers of rock. The spherules were created when asteroids crashed into Earth, vaporizing rock that expanded as a giant vapor plume. Small droplets of molten rock in the plume condensed and solidified, falling back to the surface as a thin layer. This sample was found in Western Australia and formed 2.63 billion years ago in the aftermath of a large impact. (Oberlin College photo/Bruce M. Simonson)

WEST LAFAYETTE, Ind. – Researchers are learning details about asteroid impacts going back to the Earth's early history by using a new method for extracting precise information from tiny "spherules" embedded in layers of rock.

The spherules were created when asteroids crashed into the Earth, vaporizing rock that expanded into space as a giant vapor plume. Small droplets of molten and vaporized rock in the plume condensed and solidified, falling back to Earth as a thin layer. The round or oblong particles were preserved in layers of rock, and now researchers have analyzed them to record precise information about asteroids impacting Earth from 3.5 billion to 35 million years ago.

"What we have done is provide the foundation for understanding how to interpret the layers in terms of the size and velocity of the asteroid that made them," said Jay Melosh, an expert in impact cratering and a distinguished professor of earth and atmospheric sciences, physics and aerospace engineering at Purdue University.

Findings, which support a theory that the Earth endured an especially heavy period of asteroid bombardment early in its history, are detailed in a research paper appearing online in the journal Nature on Wednesday (April 25). The paper was written by Purdue physics graduate student Brandon Johnson and Melosh. The findings, based on geologic observations, support a theoretical study in a companion paper in Nature by researchers at the Southwest Research Institute in Boulder, Colo.

The period of heavy asteroid bombardment - from 4.2 to 3.5 billion years ago - is thought to have been influenced by changes in the early solar system that altered the trajectory of objects in an asteroid belt located between Mars and Jupiter, sending them on a collision course with Earth.

"That's the postulate, and this is the first real solid evidence that it actually happened," Melosh said. "Some of the asteroids that we infer were about 40 kilometers in diameter, much larger than the one that killed off the dinosaurs about 65 million years ago that was about 12-15 kilometers. But when we looked at the number of impactors as a function of size, we got a curve that showed a lot more small objects than large ones, a pattern that matches exactly the distribution of sizes in the asteroid belt. For the first time we have a direct connection between the crater size distribution on the ancient Earth and the sizes of asteroids out in space."

Because craters are difficult to study directly, impact history must be inferred either by observations of asteroids that periodically pass near the Earth or by studying craters on the moon. Now, the new technique using spherules offers a far more accurate alternative to chronicle asteroid impacts on Earth, Melosh said.

"We can look at these spherules, see how thick the layer is, how big the spherules are, and we can infer the size and velocity of the asteroid," Melosh said. "We can go back to the earliest era in the history of the Earth and infer the population of asteroids impacting the planet."

For asteroids larger than about 10 kilometers in diameter, the spherules are deposited in a global layer.

"Some of these impacts were several times larger than the Chicxulub impact that killed off the dinosaurs 65 million years ago," Johnson said. "The impacts may have played a large role in the evolutional history of life. The large number of impacts may have helped simple life by introducing organics and other important materials at a time when life on Earth was just taking hold."

A 40-kilometer asteroid would have wiped out everything on the Earth's surface, whereas the one that struck 65 million years ago killed only land animals weighing more than around 20 kilograms.

"Impact craters are the most obvious indication of asteroid impacts, but craters on Earth are quickly obscured or destroyed by surface weathering and tectonic processes," Johnson said. "However, the spherule layers, if preserved in the geologic record, provide information about an impact even when the source crater cannot be found."

"There have been some new wrinkles in vapor condensation modeling that motivated us to do this work, and we were the first to apply it to asteroid impacts," Melosh said.

The spherules are about a millimeter in diameter.

The researchers also are studying a different type of artifact similar to spherules but found only near the original impact site. Whereas the globally distributed spherules come from the condensing vaporized rock, these "melt droplets" are from rock that's been melted and not completely vaporized.

"Before this work, it was not possible to distinguish between these two types of formations," Melosh said. "Nobody had established criteria for discriminating between them, and we've done that now."

One of the authors of the Southwest Research Institute paper, David Minton, is now an assistant professor of earth and atmospheric sciences at Purdue.

Findings from the research may enable Melosh's team to enhance an asteroid impact effects calculator he developed to estimate what would happen if asteroids of various sizes were to hit the Earth. The calculator, "Impact: Earth!" allows anyone to calculate potential comet or asteroid damage based on the object's mass.

The research has been funded by NASA.

Impact Spherules: Record of an Ancient Heavy Bombardment of Earth

a Department of Physics, Purdue University

Impact craters are the most obvious indication of asteroid impacts, but craters on Earth are quickly obscured or destroyed by surface weathering and tectonic processes1. Earth's impact history is inferred therefore either from estimates of the present-day impactor flux as determined by observations of near-Earth asteroids, or from the Moon's incomplete impact chronology. Asteroids hitting Earth typically vaporize a mass of target rock comparable to the projectile's mass. As this vapor expands in a large plume or fireball, it cools and condenses into molten droplets called spherules. For asteroids larger than about 10 kilometers in diameter, these spherules are deposited in a global layer. Spherule layers preserved in the geologic record accordingly provide information about an impact even when the source crater cannot be found. Here, we report estimates of the sizes and impact velocities of the asteroids that created global spherule layers. The impact chronology from these spherule layers reveals that the impactor flux was significantly higher 3.5 billion years ago than it is now. This conclusion is consistent with a gradual decline of the impactor flux after the Late Heavy Bombardment.