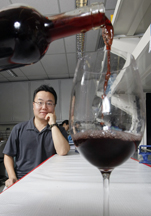 WEST LAFAYETTE, Ind. - A compound found in red wine, grapes and other fruits, and similar in structure to resveratrol, is able to block cellular processes that allow fat cells to develop, opening a door to a potential method to control obesity, according to a Purdue University study.

Kee-Hong Kim, an assistant professor of food science, and Jung Yeon Kwon, a graduate student in Kim's laboratory, reported in this week's issue of the Journal of Biological Chemistry that the compound piceatannol blocks an immature fat cell's ability to develop and grow.

While similar in structure to resveratrol – the compound found in red wine, grapes and peanuts that is thought to combat cancer, heart disease and neurodegenerative diseases – piceatannol might be an important weapon against obesity. Resveratrol is converted to piceatannol in humans after consumption.

"Piceatannol actually alters the timing of gene expressions, gene functions and insulin action during adipogenesis, the process in which early stage fat cells become mature fat cells," Kim said. "In the presence of piceatannol, you can see delay or complete inhibition of adipogenesis."

"These precursor cells, even though they have not accumulated lipids, have the potential to become fat cells," Kim said. "We consider that adipogenesis is an important molecular target to delay or prevent fat cell accumulation and, hopefully, body fat mass gain."

Piceatannol is one of several compounds being studied in Kim's laboratory for its health benefits, and it is also present in different amounts in red grape seeds and skin, blueberries, passion fruit, and other fruits.

Kim would like to confirm his current finding, which is based on a cell culture system, using an animal model of obesity. His future work would also include determining methods for protecting piceatannol from degrading so that concentrations large enough would be available in the bloodstream to stop adipogenesis or body fat gain.

"We need to work on improving the stability and solubility of piceatannol to create a biological effect," Kim said.

VIDEO:
The url to view the video is:
https://www.youtube.com/watch?v=qdbK6ILyjKw&feature=youtu.be