Pesticide additives cause drifting droplets, but can be controlled 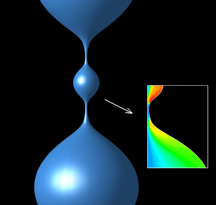 Simulations and high-speed visualization reveal a synergistic effect between chemical additives that can lead to the formation of satellite droplets during crop spraying. Emission of satellite droplets - shown here between two main drops - is also detrimental in a number of applications ranging from food processing to rocket propulsion systems. (Purdue University image) <a href="https://pinterest.com/pin/create/button/?url=http%3A%2F%2Fwww.purdue.edu%2Fnewsroom%2Fresearch%2F2012%2F120320CorvalanDroplets.html&media=http%3A%2F%2Fnews.uns.purdue.edu%2Fimages%2F2012%2Fcorvalan-droplets.jpg&description=Simulations%20and%20high-speed%20visualization%20reveal%20a%20synergistic%20effect%20between%20chemical%20additives%20that%20can%20lead%20to%20the%20formation%20of%20satellite%20droplets%20during%20crop%20spraying.%20Emission%20of%20satellite%20droplets%20-%20shown%20here%20between%20two%20main%20drops%20-%20is%20also%20detrimental%20in%20a%20number%20of%20applications%20ranging%20from%20food%20processing%20to%20rocket%20propulsion%20systems.%20(Purdue%20University%20image)" class="pin-it-button" count-layout="none"><img border="0" src="//assets.pinterest.com/images/PinExt.png" title="Pin It" /></a>

WEST LAFAYETTE, Ind. – Chemical additives that help agricultural pesticides adhere to their targets during spraying can lead to formation of smaller "satellite" droplets that cause those pesticides to drift into unwanted areas, Purdue University researchers have found.

"When we spray liquids, we have what we call main drops, which are drops of the desired size, and we can also have smaller satellite drops. The smaller drops move easily by wind and travel long distances," Corvalan said. "Now that we know better how additives influence the formation of satellite droplets, we can control their formation."

The research will also have applications in food processing and rocket propulsion, where drop sizes are important.

When liquids are sprayed, they start in a stream and eventually form drops. As the liquids move farther in the air, drops connected by a thin filament start to pull apart. That filament eventually detaches and becomes part of the drops that were forming on either side of it.

"Each additive is designed to improve the characteristics of the main drops," Corvalan said. "But there is a side effect."

When both additives are present in a pesticide, the surfactant pushes more liquid toward the filament. The reduced viscosity allows liquid to flow more easily in that direction, resulting in a well-defined satellite drop forming in the filament.

"When you put both additives together, there is a synergistic effect. The force induced by the surfactant that was opposed by viscosity is no longer so strongly opposed, and this combined effect can result in the formation of satellite droplets," Corvalan said.

Drifting of agricultural pesticides not only increases waste and cost for farmers but also can cause health, environmental and property damage, according to the U.S. Environmental Protection Agency.

The results show that carefully modulating the strength, concentration or ratio of surfactants to polymer additives can mitigate or eliminate the formation of unwanted satellite droplets.

Corvalan is now transferring the results obtained from agricultural research into food processing and rocket propulsion work. He said drop size uniformity is as important for fuels sprayed into rocket combustion chambers as for the production of food emulsions.

The U.S. Department of Agriculture National Institute of Food and Agriculture, Air Quality Program, and the Army Research Office funded the work.

The breakup into drops of complex-fluid filaments – usually jets of polymeric and surfactant solutions – plays a central role in many engineering applications ranging from crop spraying to food processing and propulsion systems. To assess the influence of interfacial perturbations in the breakup process, we followed the dynamics of the initial wavelength of surface instability on complex-fluid filaments using direct numerical simulation. We found a threshold wavelength at low Reynolds numbers corresponding to a change on the filament's configuration near breakup from large primary drops connected by slender liquid threads for wavelengths below the threshold to clearly defined satellite drops in between the primary drops for wavelengths larger than the threshold. We also found that shear-thinning effects, by reducing the viscous resistance to the Marangoni stress responsible for the formation of the satellites, cause the threshold to appear at shorter wavelengths.