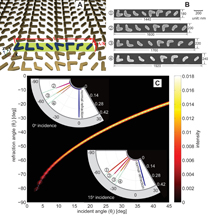 The image in the upper left shows a schematic for an array of gold "plasmonic nanoantennas" able to precisely manipulate light in new ways, a technology that could make possible a range of optical innovations such as more powerful microscopes, telecommunications and computers. At upper right is a scanning electron microscope image of the structures. The figure below shows the experimentally measured refraction angle versus incidence angle for light, demonstrating how the nanoantennas alter the refraction. (Purdue University Birck Nanotechnology Center image)

WEST LAFAYETTE, Ind. – Researchers have shown how arrays of tiny "plasmonic nanoantennas" are able to precisely manipulate light in new ways that could make possible a range of optical innovations such as more powerful microscopes, telecommunications and computers.

The researchers at Purdue University used the nanoantennas to abruptly change a property of light called its phase. Light is transmitted as waves analogous to waves of water, which have high and low points. The phase defines these high and low points of light.

"By abruptly changing the phase we can dramatically modify how light propagates, and that opens up the possibility of many potential applications," said Vladimir Shalaev, scientific director of nanophotonics at Purdue's Birck Nanotechnology Center and a distinguished professor of electrical and computer engineering.

Findings are described in a paper to be published online Thursday (Dec. 22) in the journal Science.

The new work at Purdue extends findings by researchers led by Federico Capasso, the Robert L. Wallace Professor of Applied Physics and Vinton Hayes Senior Research Fellow in Electrical Engineering at the Harvard School of Engineering and Applied Sciences. In that work, described in an October Science paper, Harvard researchers modified Snell's law, a long-held formula used to describe how light reflects and refracts, or bends, while passing from one material into another.

"What they pointed out was revolutionary," Shalaev said.

Until now, Snell's law has implied that when light passes from one material to another there are no abrupt phase changes along the interface between the materials. Harvard researchers, however, conducted experiments showing that the phase of light and the propagation direction can be changed dramatically by using new types of structures called metamaterials, which in this case were based on an array of antennas.

The wavelength size manipulated by the antennas in the Purdue experiment ranges from 1 to 1.9 microns.

"The near infrared, specifically a wavelength of 1.5 microns, is essential for telecommunications," Shalaev said. "Information is transmitted across optical fibers using this wavelength, which makes this innovation potentially practical for advances in telecommunications."

The Harvard researchers predicted how to modify Snell's law and demonstrated the principle at one wavelength.

"We have extended the Harvard team's applications to the near infrared, which is important, and we also showed that it's not a single frequency effect, it's a very broadband effect," Shalaev said. "Having a broadband effect potentially offers a range of technological applications."

The innovation could bring technologies for steering and shaping laser beams for military and communications applications, nanocircuits for computers that use light to process information, and new types of powerful lenses for microscopes.

Critical to the advance is the ability to alter light so that it exhibits "anomalous" behavior: notably, it bends in ways not possible using conventional materials by radically altering its refraction, a process that occurs as electromagnetic waves, including light, bend when passing from one material into another.

Scientists measure this bending of radiation by its "index of refraction." Refraction causes the bent-stick-in-water effect, which occurs when a stick placed in a glass of water appears bent when viewed from the outside. Each material has its own refraction index, which describes how much light will bend in that particular material. All natural materials, such as glass, air and water, have positive refractive indices.

However, the nanoantenna arrays can cause light to bend in a wide range of angles including negative angles of refraction.

"Importantly, such dramatic deviation from the conventional Snell's law governing reflection and refraction occurs when light passes through structures that are actually much thinner than the width of the light's wavelengths, which is not possible using natural materials," Shalaev said. "Also, not only the bending effect, refraction, but also the reflection of light can be dramatically modified by the antenna arrays on the interface, as the experiments showed."

The nanoantennas are V-shaped structures made of gold and formed on top of a silicon layer. They are an example of metamaterials, which typically include so-called plasmonic structures that conduct clouds of electrons called plasmons. The antennas themselves have a width of 40 nanometers, or billionths of a meter, and researchers have demonstrated they are able to transmit light through an ultrathin "plasmonic nanoantenna layer" about 50 times smaller than the wavelength of light it is transmitting.

"This ultrathin layer of plasmonic nanoantennas makes the phase of light change strongly and abruptly, causing light to change its propagation direction, as required by the momentum conservation for light passing through the interface between materials," Shalaev said.

The work has been funded by the U.S. Air Force Office of Scientific Research and the National Science Foundation's Division of Materials Research.

Note to Journalists: A copy of the research paper is available by contacting the Science Press Package team at 202-326-6440, scipak@aaas.org

The precise manipulation of a propagating wave using phase control is a fundamental building block of optical systems. The wave front of a light beam propagating across an interface can be modified arbitrarily by introducing abrupt phase changes. We experimentally demonstrate unparalleled wave-front control in a broadband, optical wavelength range from 1.0 �m to 1.9 �m. This is accomplished by using an extremely thin plasmonic layer (~&lambda;/50) consisting of an optical nanoantenna array that provides subwavelength phase manipulation on light propagating across the interface. Anomalous light-bending phenomena, including negative angles of refraction and reflection, are observed in the operational wavelength range.