Put a tree in your tank? Ethanol research centers on poplars 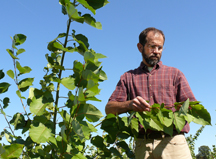 Rick Meilan, associate professor in Purdue's Department of Forestry and Natural Resources, inspects a young poplar at Pinney-Purdue Agricultural Center near Valparaiso. Meilan and a team of researchers planted three acres of poplars at Pinney and a Purdue research farm near Vincennes as part of a cellulosic ethanol study. (Purdue Agricultural Communication photo/Steve Leer)

In May a team of researchers led by Rick Meilan, associate professor of forestry and natural resources, began a five-year study to determine the viability of poplar species as an ethanol feedstock and cash crop for Indiana farmers. The study includes trial plots at Pinney-Purdue Agricultural Center east of Valparaiso and Southwest-Purdue Agricultural Center just north of Vincennes.

"For biofuel production we're principally using the sugars in corn that are fermented to produce alcohol that's then blended with petroleum products," he said. "What we'd like to do is use cellulosic feedstocks, including not just corn stover but also wood chips."

Cellulose is considered the next frontier in ethanol production. The process involves extracting sugars from the cell walls of plant material, or what is commonly known as biomass. Because most plants contain so much more biomass than grain, cellulose potentially could provide more ethanol than grain. With trees, the biomass volume is even larger than it is with most row crops.

The Purdue study is looking at 69 varieties of poplar species within the genus Populus and how they perform under different soil and climatic conditions, disease and insect pressure, and fertilization and watering regimes. The varieties all are cottonwoods, not tulip tree or yellow poplar, which aren't true poplars.

Poplars already are used in energy production. Wood is burned at some power plants to create steam to turn turbines for generating electricity. Meilan said the trees also offer advantages over other species as a cellulosic ethanol feedstock.

"One advantage is that poplars can be vegetatively propagated," he said. "That is, we can take a stem segment and just shove it into the ground and it will spontaneously produce roots in the portion of the stick that's beneath the ground, and buds above ground will lead to the production of leaves and branches."

At both Purdue research farms, Meilan's team hand-planted about 2,000 poplar sticks on three-acre tracts. The sticks measured about 8 inches long and three-eighths inch in diameter.

"Another advantage is that these trees are so efficient at photosynthesis," Meilan said. "They are capable of very rapid growth. We have some varieties that, when fertilized and irrigated, are capable of growing up to 15 feet a year in other locales. Some harvested trees are 90 feet tall at 6 years of age."

By early October some of the trees at Pinney-Purdue and Southwest-Purdue already were more than 15 feet tall.

Because poplars are a multiyear crop, they might not be as management-intensive as annual crops such as corn and soybeans, Meilan said. With a multiyear crop the ground isn't disturbed each year by planting and harvesting. And unlike row crops, poplars could be harvested at any time of the year and sent directly to ethanol plants, allowing growers to avoid drying and storage.

Extracting sugar from cellulose is more difficult than it is with grain because of the presence of lignin, an organic polymer within the cell walls of biomass. Sugars must be separated from lignin before being converted into alcohol. Meilan is working with other Purdue researchers to develop genetically modified poplar varieties that have altered lignin composition and content.

Meilan and Purdue researcher Patrick T. Murphy of the Department of Agricultural and Biological Engineering are tackling the planting and harvesting issues. Meilan believes it might be possible to modify conventional farm machinery to conduct harvesting operations without requiring farmers to make sizable investments in new equipment. Harvest would involve cutting down trees a few inches above the ground. New trees then would grow from the stems.

"If specialized equipment is needed for harvest, maybe the farmer will only be responsible for growing the crop and will, in turn, hire a contractor to come in and do the harvesting," Meilan said. "A lot of that goes on right now with corn."

Cellulosic ethanol production is not far away, Meilan said. Whether poplar will be part of the mix is uncertain.

"There are two important criteria when evaluating a potential bioenergy crop," he said. "One is how much biomass it produces. The other, which is equally important, is how efficiently the sugars contained in the biomass can be converted into fuel. As the technology develops it will become even more profitable for growers."