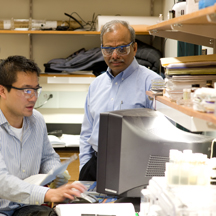 Rakesh Agrawal, at right, a distinguished professor of chemical engineering at Purdue University, will receive the National Medal of Technology and Innovation from President Barack Obama. The award is the highest honor for technological achievement bestowed by the president of the United States. Here he works with former postdoctoral student Qijie Guo. (Purdue University photo)

The award is the highest honor for technological achievement bestowed by the president of the United States.

A citation for the award recognizes him for "an extraordinary record of innovations. These innovations have had significant positive impacts on electronic device manufacturing, liquefied gas production and the supply of industrial gases for diverse industries."

He is one of five recipients. Seven National Medal of Science recipients also were named in a White House press statement issued Tuesday (Sept. 27).

"Rakesh Agrawal has dedicated his career to areas of energy research critical for industry and society," said Purdue President France A. Córdova. "He has risen to an exceptional level of achievement. The national medals are the highest awards given in the United States for scientific and technological innovation."

"I am very appreciative to President Obama for this high recognition" Agrawal said.

"Dr. Agrawal is well-deserving of this stupendous honor," said Leah H. Jamieson, the John A. Edwardson Dean of Engineering. "He is not only leading research in his field but also helping to educate a new generation of chemical engineers."

Agrawal will receive the award later this year with other National Medal of Technology laureates during a White House ceremony.

Agrawal joined Purdue in 2004 following a career in industry that included 24 years at Air Products and Chemicals Inc. in Allentown, Pa. Previously, he has focused on basic and applied research in gas separations, process development, gas liquefication processes, cryogenics and thermodynamics.

"This award is a fitting recognition of Rakesh Agrawal's outstanding work over the years, which continues to this day," said Arvind Varma, the R. Games Slayter Distinguished Professor and head of the School of Chemical Engineering. "Purdue chemical engineering is fortunate to have him as a distinguished faculty member."

The National Medal of Technology and Innovation was created in 1980 and is administered for the White House by the U.S. Department of Commerce's Patent and Trademark Office. The medal "recognizes individuals who have made outstanding contributions to science and engineering," according to the White House statement.

Note to Journalists: Broadcast-quality B-roll of Agrawal research activities is available for download and use from ftp://news69.uns.purdue.edu/Public/Agrawal/.
Soundbites are available on request. For more information, contact Jim Schenke, Purdue News Service, at 765-237-7296, or jschenke@purdue.edu