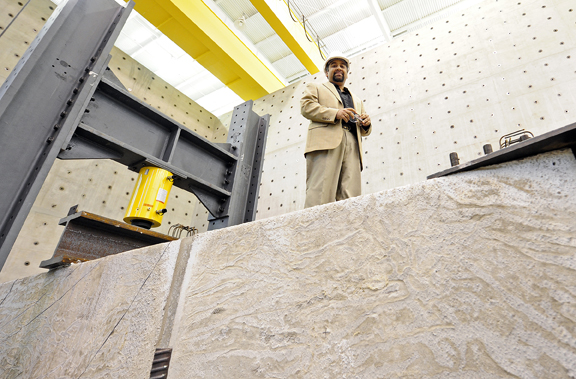 Amit Varma, a Purdue associate professor of civil engineering, is leading work that could lead to safer steel structures such as buildings and bridges and also an emerging type of nuclear power plant design. The work is based at Purdue's Robert L. and Terry L. Bowen Laboratory for Large-Scale Civil Engineering Research. (Purdue University file photo/Andrew Hancock)

WEST LAFAYETTE, Ind. - Ten years after 9/11, researchers at Purdue University are continuing work that could lead to safer steel structures such as buildings and bridges and also an emerging type of nuclear power plant design.

"I want people to understand that in the last 10 years we've not been quiet," said Amit Varma, a Purdue associate professor of civil engineering. "We've been working to make structures better and safer."

The researchers are using a custom heating system and a specialized laboratory for testing large beams and other components and have created models that could be used in designs to improve fire safety.

New findings are detailed in two research papers appearing this month as part of a special 9/11 issue of the American Society of Civil Engineers' Journal of Structural Engineering. The work has been led by Varma, doctoral student Lisa Choe and graduate student Emily Wellman.

Data will be used to potentially update design codes for steel structures and to test and verify computational building-design models.

Steel components in buildings are covered with fireproofing materials to resist the effects of extreme heating.

"So the air could be 1,000 degrees in a fire, but the insulated steel might be 500 degrees or less," Varma said. "However, once the steel gets beyond 600 degrees Celsius, there can be some major problems."

The Purdue researchers designed a system made up of heating panels to simulate the effects of fire. The heating system is being used to test full-scale steel columns at Purdue's Robert L. and Terry L. Bowen Laboratory for Large-Scale Civil Engineering Research. The panels have electrical coils, like giant toaster ovens, and are placed close to surfaces being studied. As the system is used to simulate the effects of fire, test structures are subjected to forces with hydraulic equipment to mimic the loads experienced in real structures.

"We wanted to build an experimental method that engineers can use to study the behavior of buildings in fire using a structures laboratory," he said. "Most of the previous work has been done in fire laboratories, which don't have the same experimental resources of a structures lab. We can subject the structures to failure and make more fundamental observations of behavior and failure to build models. Almost no tests or data like we have can be found in the public domain."

Doctoral student Anil Agrawal led work to create a model that shows precisely what happens to a steel member subjected to fire while forces are applied by the hydraulic cylinders. The model has been found to be accurate when compared to the experimental results from work led by Choe.

"These are very difficult experiments to perform," Varma said. "Having a dependable model to predict behavior means you don't have to do as many experiments when testing new designs."

Wellman led a portion of the work focusing on the effects of fire on a building's steel-and-concrete floor and its connections to the building. The composite design is the most common type of floor system used in steel structures.

"Conventional wisdom says the presence of concrete floors improves the fire resistance of a building," Varma said. "We found that this isn't necessarily true for the worst-case scenario, unless you set out to design the floor specifically to perform well in fire."

The aim of the research is to learn precisely what happens to the connections between a floor's steel beams and the building columns. Extreme heat causes the beams to sag.

"When it starts sagging, the question is, how do the connections perform? This has been a big question for the industry," Varma said.

The researchers analyzed critical joints after a floor system was subjected to extreme heat in a special oven at Michigan State University. Results will be used to help researchers create a model of the steel-concrete floor system.

"It is far more difficult to model a floor system than it is to model columns," Varma said. "But we will eventually be able to do that."

Another paper to be published in December in the American Institute of Steel Construction's Engineering Journal shows how to use the models to create design specifications for columns. The paper was written by Agrawal, who also is involved in modeling the steel columns and the collapse of entire building systems. The work is ongoing.

Varma also has led research to test a new type of design for nuclear power plants. The work focuses on testing structures like those to be used in the Westinghouse Electric Co. AP1000 standard nuclear power plant design. Engineers tested components of an "enhanced shield building" that will contain the plant's main system components.

The building consists of an inner steel-wall containment vessel and an outer radiation shield made using a technology called steel-concrete-composite construction. Instead of using more conventional reinforced concrete, which is strengthened with steel bars, the steel-concrete approach uses a sandwich of steel plates filled with concrete.

Findings have shown the design withstands the seismic forces that would result from strong earthquakes. Data also indicate the construction method, also called armored construction, could be used to create structures capable of withstanding aircraft or missile attacks.

"When you have steel plates on the inside and on the outside, it's a structure that would hold up against an aircraft impact or extreme weather events, such as tornados," Varma said. "Nothing can easily punch through that sort of structure."

The Bowen lab is one of a handful of facilities where testing can be performed on full-scale structures instead of smaller-scale specimens, yielding more accurate data. The 66,000-square-foot laboratory is equipped with special hydraulic testing equipment and powerful overhead cranes.

Note to Journalists: Broadcast-quality B-roll and sound bites are available for download and use at ftp://news69.uns.purdue.edu/Public/VarmaFireBeam. For more information, contact Jim Schenke, Purdue News Service, at 765-237-7296, jschenke@purdue.edu

This paper presents the behavior observations, results, and findings from experimental investigations of the structural behavior of thin composite floor systems subjected to combined gravity loads and fire loading. The 3:96 x 4:57 m floor systems consisted of A992 steel W10 x 15 interior beams and W12 x 16 girders acting composite with a 38.1-mm-deep ribbed steel deck with 63.5 mm of lightweight concrete on top. Three composite floor-assembly specimens were tested with two different shear connection types (welded-bolted shear tab and all-bolted double-angle connection), two different fire scenarios (realistic fires with standard heating and uncontrolled or controlled cooling paths), and two different fire protection scenarios (i.e., interior beams with or without fire protection). The experimental results indicate that removal of fireproofing from the interior beams causes them to heat, deflect, and fail more rapidly. The beams and girders have similar deflection-versus-temperature behaviors irrespective of the fireproofing on the interior beams. The thin lightweight composite slab used in these tests contributes significantly to the load transfer from the interior beams to the girders, but it does not seem to be able to support the interior beams once they started failing. Removing the fire protection from the interior beams of thin lightweight composite slabs such as those tested in this paper is not recommended, unless better behavior can be demonstrated through future tests that include effects of  neighboring floor systems. DOI: 10.1061/(ASCE)ST.1943-541X.0000451. � 2011 American Society of Civil Engineers.

Design of Steel Columns at Elevated Temperatures Due to Fire: Effects of Rotational Restraints

The stability of steel building structures under fire loading is often governed by the performance of the gravity load resisting systems. The inelastic buckling failure of gravity load bearing columns can potentially initiate and propagate stability failure of the associated sub-system, compartment, or story. This paper presents a design methodology for wide-flange hot-rolled steel columns (W-shape) under uniform compression at elevated temperatures. A number of simply supported W-shape columns were modeled and analyzed using the finite element method (FEM). The analysis for axial loading followed by thermal loading was conducted using the nonlinear implicit dynamic analysis method to achieve complete stability failure. The models and analysis approach were validated using the results of existing column test data at elevated temperatures. The analytical approach was used to expand the database and to conduct parametric studies. The results are compared to existing column design equations at elevated temperatures, and used to propose revisions to the AISC ambient temperature design equations for steel columns to account for the effects of: (i) elevated temperatures, and (ii) rotational restraints from cooler columns above and below the heated story.