Popular fungicides failing, may cause hard choices for apple growers 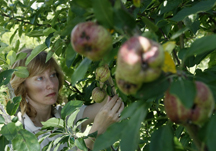 WEST LAFAYETTE, Ind. - Orchard growers have started finding that some of the most commonly used fungicides are no longer effective at controlling apple scab, according to a Purdue University study.

Janna Beckerman, an associate professor of botany and plant pathology, said that extensive, long-term use of four popular fungicides has led to resistances in apples in Indiana and Michigan, the focus of her study.

"The fungicides that are regularly used to control scab have started to fail," said Beckerman, whose findings were published in the early online version of the journal Plant Disease. "But the most disturbing thing we found is that many of the samples we tested were resistant to all four fungicides. It's kind of like multidrug resistance in antibiotics. This is full-blown resistance."

Apple scab, caused by the fungus Venturia inaequalis, is highly destructive to apples, causing brown lesions on leaves and fruit. A single lesion can reduce an apple's value by 85 percent. Over time, the scabby lesion will crack and allow insects, other fungi and bacteria inside, causing a loss of the crop.

"It can cause orchard failures," Beckerman said. "An orchard grower that has this could lose blocks of an orchard, or depending on the amount of diversity in the orchard, they could lose the entire crop."

It's thought that when organisms adapt to form resistance, that change will weaken the organism in some other way. Beckerman said the study, done with Purdue graduate student Kim Chapman and Michigan State University professor George Sundin, showed apple scab, on the contrary, is becoming resistant to fungicides with no apparent fitness penalty to itself.

"Having these multiple resistances to fungicides doesn't debilitate them in any way," Beckerman said.

The only options apple growers have, Beckerman said, is to use older fungicides that are tightly regulated, require more frequent application and are more expensive.

"It's going to change how growers manage their orchards," Beckerman said. "The more susceptible apple cultivars, like McIntosh, will become more chemically intensive to manage. Growers have few options as it is, and this will limit their options even further."

Beckerman said she and her collaborators would work to develop faster tests to detect fungicide resistance in apple scab to help growers change management plans in a timely manner. The U.S. Department of Agriculture, Purdue University and the Michigan Agricultural Experiment Station funded the research.