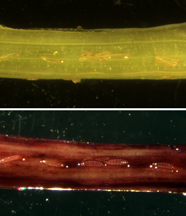 A Hessian fly-infested susceptible wheat seedling before (top) and after (bottom) staining with red dye. The larvae induce the host plant cells to increase in permeability, as visualized by their ability to absorb the red stain. This increased permeability allows plant nutrients to leak to the surface where they are consumed by the larvae. (Photo by Jill Nemacheck)

WEST LAFAYETTE, Ind. - The interaction between a Hessian fly's saliva and the wheat plant it is attacking may be the key to whether the pest eats like a king or dies like a starving pauper, according to a study done at Purdue University.

"The insect induces or suppresses susceptibility in the plant," said Christie Williams, a research scientist with the U.S. Department of Agriculture's Agricultural Research Service and a Purdue associate professor of entomology. "It's not that the fly larva is making holes and retrieving nutrients as once thought. The larva is doing something chemically to change the plant."

Williams and a team of entomologists found that Hessian flies, which cause millions of dollars in damage to U.S. wheat crops each year, trigger one of two responses in plants: the plants either put up strong defenses to essentially starve the fly or succumb, releasing essential nutrients to the fly. Their findings were published in the early online release of the Journal of Experimental Botany.

"At about the first day of attack, when susceptible plants become permeable, they start to secrete nutrients that the larvae consume," said Jill Nemacheck, a USDA/ARS biological sciences technician at Purdue and paper co-author. "In resistant plants, that permeability goes away because the plant does its job quickly and releases proteins that make the larva not want to feed."

"It's a simple way to visually observe how the tissue is affected," said Kurt Saltzmann, a Purdue research assistant professor of molecular entomology and co-author of the paper. "It's one of those things you can see immediately."

Researchers saw signs that resistant plants were producing more lipase, a protein that degrades lipids, or fats, in the cell surface. It is believed that lipase acts as a defense by providing the small surface holes that deliver toxic proteins to deter larvae from feeding.

In an unexpected twist, however, the researchers found cases in which avirulent fly larvae, which should trigger defense mechanisms from the plants that lead to the larvae deaths, could survive in some cases. A virulent larva that attacks a resistant plant that has already initiated defense mechanisms can reverse those defenses. In that case, both the virulent and avirulent flies would be able to feed on the plant.

"By having this rescue happen, it keeps some avirulent flies in the population," Williams said. "This may be an advantage to the plant to some degree. It probably extends the durability of resistance."

The next step in the research is to determine which genes are responsible for turning on wheat defenses and how those could be activated to respond to virulent flies.

"We need to better understand the mechanisms that occur when a virulent larva infests a host plant in order to build better defenses for those plants," said Subhashree Subramanyam, a research associate in agronomy and paper co-author.

The U.S. Department of Agriculture-Agricultural Research Service funded the research.

Salivary secretions of neonate Hessian fly larvae initiate a two-way exchange of molecules with their wheat host. Changes in properties of the leaf surface allow larval effectors to enter the plant where they trigger plant processes leading to resistance and delivery of defense molecules, or susceptibility and delivery of nutrients. To increase understanding of the host plant's response, the timing and characteristics of the induced epidermal permeability were investigated. Resistant plant permeability was transient and limited in area, persisting just long enough to deliver defense molecules before gene expression and permeability reverted to pre-infestation levels. The abundance of transcripts for GDSL-motif lipase/hydrolase, thought to contribute to cuticle reorganization and increased permeability, followed the same temporal profile as permeability in resistant plants. In contrast, susceptible plants continued to increase in permeability over time until the entire crown of the plant became a nutrient sink. Permeability increased with higher infestation levels in susceptible but not in resistant plants. The ramifications of induced plant permeability on Hessian fly populations are discussed.