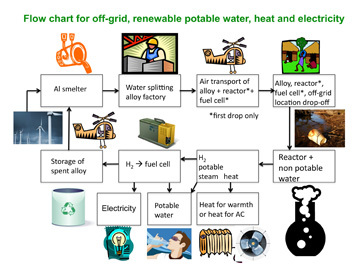 A cartoon illustrates the potential uses of a new theoretical type of mobile technology that would use an aluminum alloy to convert non-potable water into drinking water while also extracting hydrogen to generate electricity. Such a lightweight, portable system might be used to provide power and drinking water to villages and also for military operations. (Jerry Woodall, Purdue University)

WEST LAFAYETTE, Ind. – Researchers have developed an aluminum alloy that could be used in a new type of mobile technology to convert non-potable water into drinking water while also extracting hydrogen to generate electricity.

Such a technology might be used to provide power and drinking water to villages and also for military operations, said Jerry Woodall, a Purdue University distinguished professor of electrical and computer engineering.

The alloy contains aluminum, gallium, indium and tin. Immersing the alloy in freshwater or saltwater causes a spontaneous reaction, turning the water into steam and generating hydrogen and aluminum tri-hydroxide until the aluminum is used up. The hydrogen could then be fed to a fuel cell to generate electricity, producing potable water.

"The steam would kill any bacteria contained in the water, and then it would condense to purified water," Woodall said. "So, you are converting undrinkable water to drinking water."

Because the technology works with saltwater, it might have marine applications, such as powering boats and robotic underwater vehicles. The technology also might be used to desalinate water, said Woodall, who is working with doctoral student Go Choi.

A patent on the design is pending.

Woodall envisions a new portable technology for regions that aren't connected to a power grid, such as villages in Africa and other remote areas.

"There is a big need for this sort of technology in places lacking connectivity to a power grid and where potable water is in short supply," he said. "Because aluminum is a low-cost, non-hazardous metal that is the third-most abundant metal on Earth, this technology promises to enable a global-scale potable water and power technology, especially for off-grid and remote locations."

The potable water could be produced for about $1 per gallon, and electricity could be generated for about 35 cents per kilowatt hour of energy.

"There is no other technology to compare it against, economically, but it's obvious that 34 cents per kilowatt hour is cheap compared to building a power plant and installing power lines, especially in remote areas," Woodall said.

The unit, including the alloy, the reactor and fuel cell might weigh less than 100 pounds.

"You could drop the alloy, a small reaction vessel and a fuel cell into a remote area via parachute," Woodall said. "Then the reactor could be assembled along with the fuel cell. The polluted water or the seawater would be added to the reactor and the reaction converts the aluminum and water into aluminum hydroxide, heat and hydrogen gas on demand."

The aluminum hydroxide waste is non-toxic and could be disposed of in a landfill.

The researchers have a design but haven't built a prototype.