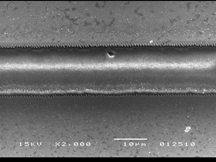 This image, taken with a scanning electron microscope, shows a microchannel that was created using an ultrafast-pulsing laser. (Purdue University School of Mechanical Engineering image/Yung Shin)

The innovation may help to overcome two major obstacles that hinder widespread adoption of solar cells: the need to reduce manufacturing costs and increase the efficiency of converting sunlight into an electric current, said Yung Shin, a professor of mechanical engineering and director of Purdue University's Center for Laser-Based Manufacturing.

Critical to both are tiny "microchannels" needed to interconnect a series of solar panels into an array capable of generating useable amounts of power, he said. Conventional "scribing" methods, which create the channels mechanically with a stylus, are slow and expensive and produce imperfect channels, impeding solar cells' performance.

"Production costs of solar cells have been greatly reduced by making them out of thin films instead of wafers, but it is difficult to create high-quality microchannels in these thin films," Shin said. "The mechanical scribing methods in commercial use do not create high-quality, well-defined channels. Although laser scribing has been studied extensively, until now we haven't been able to precisely control lasers to accurately create the microchannels to the exacting specifications required."

The researchers hope to increase efficiency while cutting cost significantly using an "ultrashort pulse laser" to create the microchannels in thin-film solar cells, he said.

The work, funded with a three-year, $425,000 grant from the National Science Foundation, is led by Shin and Gary Cheng, an associate professor of industrial engineering. A research paper demonstrating the feasibility of the technique was published in Proceedings of the 2011 NSF Engineering Research and Innovation Conference in January. The paper was written by Shin, Cheng, and graduate students Wenqian Hu, Martin Yi Zhang and Seunghyun Lee.

"The efficiency of solar cells depends largely on how accurate your scribing of microchannels is," Shin said. "If they are made as accurately as possibly, efficiency goes up."

Research results have shown that the fast-pulsing laser accurately formed microchannels with precise depths and sharp boundaries. The laser pulses last only a matter of picoseconds, or quadrillionths of a second. Because the pulses are so fleeting the laser does not cause heat damage to the thin film, removing material in precise patterns in a process called "cold ablation."

"It creates very clean microchannels on the surface of each layer," Shin said. "You can do this at very high speed, meters per second, which is not possible with a mechanical scribe. This is very tricky because the laser must be precisely controlled so that it penetrates only one layer of the thin film at a time, and the layers are extremely thin. You can do that with this kind of laser because you have a very precise control of the depth, to about 10 to 20 nanometers."

The researchers plan to establish the scientific basis for the laser-ablation technique by the end of the three-year period. The work is funded through NSF’s Civil Mechanical and Manufacturing Innovation division.

Information about photovoltaic cells is available from the U.S. Department of Energy's National Renewable Energy Laboratory at https://www.nrel.gov/learning/re_photovoltaics.html

Note to Journalists: An electronic copy of the research paper is available by contacting Emil Venere, 765-494-4709, venere@purdue.edu

In this paper, the feasibility of thin-film solar cells scribing via a picosecond (ps) laser is investigated. The optical and thermal properties of thin films are studied first. Next, molybdenum and ZnO thin films are deposited on soda lime glass substrates by pulsed laser deposition. Then experiments for picosecond laser scribing are performed with different wavelengths and average powers and results are analyzed for process parameter optimization. The scribed slots are measured using a surface profilometer and a scanning electron microscope (SEM). Using the optimized laser parameters, the ablation depths of the slots are accurate within 0.1 μm tolerance, the edges are sharp without distortions and slot bottoms are flat. These slots are precisely machined with a high speed, which makes ps laser scribing of solar cells a promising technique.