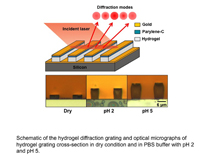 This diagram depicts a new type of "diffraction-based" sensor made of thin stripes of a gelatinous material called a hydrogel, which expands and contracts depending on the acidity of its environment. The new type of biological and chemical sensor has few moving parts and works by precisely determining pH, revealing the identity of substances in liquid environments such as water or blood. The microscopic images at bottom show how the hydrogel stripes expand with decreasing acidity. (Birck Nanotechnology Center, Purdue University)

WEST LAFAYETTE, Ind. - Researchers are developing a new type of biological and chemical sensor that has few moving parts, is low-cost and yet highly sensitive, sturdy and long-lasting.

The "diffraction-based" sensors are made of thin stripes of a gelatinous material called a hydrogel, which expands and contracts depending on the acidity of its environment.

Recent research findings have demonstrated that the sensor can be used to precisely determine pH - a measure of how acidic or basic a liquid is - revealing information about substances in liquid environments, said Cagri Savran (pronounced Chary Savran), an associate professor of mechanical engineering at Purdue University.

The sensor's simple design could make it more practical than other sensors in development, he said.

"Many sensors being developed today are brilliantly designed but are too expensive to produce, require highly skilled operators and are not robust enough to be practical," said Savran, whose work is based at Purdue's Birck Nanotechnology Center in the university's Discovery Park.

New findings show the technology is highly sensitive and might be used in chemical and biological applications including environmental monitoring in waterways and glucose monitoring in blood.

"As with any novel platform, more development is needed, but the detection principle behind this technology is so simple that it wouldn't be difficult to commercialize," said Savran, who is collaborating with another team of researchers led by Babak Ziaie, a Purdue professor of electrical and computer engineering and biomedical engineering.

Findings are detailed in a paper presented during the IEEE Sensors 2010 Conference in November and also published in the conference proceedings. The paper was written by postdoctoral researcher Chun-Li Chang, doctoral student Zhenwen Ding, Ziaie and Savran.

The flexible, water-insoluble hydrogel is formed into a series of raised stripes called a "diffraction grating," which is coated with gold on both the stripe surfaces and the spaces in between. The stripes expand and contract depending on the pH level of the environment.

Researchers in Ziaie's lab fabricated the hydrogel, while Savran's group led work in the design, development and testing of the diffraction-based sensor.

The sensors work by analyzing laser light reflecting off the gold coatings. Reflections from the stripes and spaces in between interfere with each other, creating a "diffraction pattern" that differs depending on the height of the stripes.

These diffraction patterns indicate minute changes in the movement of the hydrogel stripes in response to the environment, in effect measuring changes in pH.

"By precise measurement of pH, the diffraction patterns can reveal a lot of information about the sample environment," said Savran, who by courtesy is an associate professor of biomedical engineering and electrical and computer engineering. "This technology detects very small changes in the swelling of the diffraction grating, which makes them very sensitive."

The pH of a liquid is recorded on a scale from 0 to 14, with 0 being the most acidic and 14 the most basic. Findings showed the device's high sensitivity enables it to resolve changes smaller than one-1,000th on the pH scale, measuring swelling of only a few nanometers. A nanometer is about 50,000 times smaller than the finest sand grain.

"We know we can make them even more sensitive," Savran said. "By using different hydrogels, gratings responsive to stimuli other than pH can also be fabricated."

The work is ongoing.

"It's a good example of collaborations that can blossom when labs focusing on different research are located next to each other," Savran said. "Professor Ziaie's lab was already working with hydrogels, and my group was working on diffraction-based sensors. Hearing about the hydrogels work next door, one of my postdoctoral researchers, Chun-Li Chang thought of making a reflective diffraction grating out of hydrogels."

The Office of Technology Commercialization of the Purdue Research Foundation has filed for U.S. patent protection on the concept.

Note to Journalists: An electronic copy of the research paper is available by contacting Emil Venere, Purdue News Service, at 765-494-4709, venere@purdue.edu

We report reflective diffraction gratings made from smart hydrogels for ultrasensitive biochemical detection. As an example for a biochemically responsive hydrogel, we chose a pH-sensitive hydrogel to construct diffraction gratings that swell or shrink due to changes in pH. Interferometric analysis of the grating enabled detection of the hydrogel's swelling/shrinking with nanoscale precision with a resolution of 6×10-4 pH units. The developed system is remarkably simple both to fabricate and operate. Moreover, the concept of the hydrogel grating is generic and can be widely applied to hydrogels responsive to other stimuli.