This image shows a 3-D rendering of one of the channels lined with cells from a new model that will be used to test nanomedical approaches for the detection and treatment of breast cancer. (Purdue University/Lelièvre laboratory - reproduced by permission of The Royal Society of Chemistry)

WEST LAFAYETTE, Ind. - Purdue University researchers have reproduced portions of the female breast in a tiny slide-sized model dubbed "breast on-a-chip" that will be used to test nanomedical approaches for the detection and treatment of breast cancer.

The model mimics the branching mammary duct system, where most breast cancers begin, and will serve as an "engineered organ" to study the use of nanoparticles to detect and target tumor cells within the ducts.

"Breast cancer is the most common cancer in women in most countries, and in the U.S. alone nearly 40,000 women lost their lives to it this past year," said Lelièvre, who is associate director of discovery groups in the Purdue Center for Cancer Research and a leader of the international breast cancer and nutrition project in the Oncological Sciences Center. "We've known that the best way to detect this cancer early and treat it effectively would be to get inside the mammary ducts to evaluate and treat the cells directly, and this is the first step in that direction."

The nanoparticles could carry contrast agents to improve mammography, fluorescent markers to guide surgeons or anticancer agents to treat the cancer, Leary said.

"Nanoparticles can be designed to latch on to cancer cells and illuminate them, decreasing the size of a tumor that can be detected through mammography from 5 millimeters to 2 millimeters, which translates into finding the cancer 10 times earlier in its evolution," Leary said. "There also is great potential for nanoparticles to deliver anticancer agents directly to the cancer cells, eliminating the need for standard chemotherapy that circulates through the entire body causing harmful side effects."

Physicians have tried to access the mammary ducts through the nipple in the past, injecting fluid solutions to try to wash out cells that could be examined and used for a diagnosis of cancer. However, this approach could only reach the first third of the breast due to fluid pressure from the ducts, which branch and become smaller and smaller as they approach the glands that produce milk, Leary said. 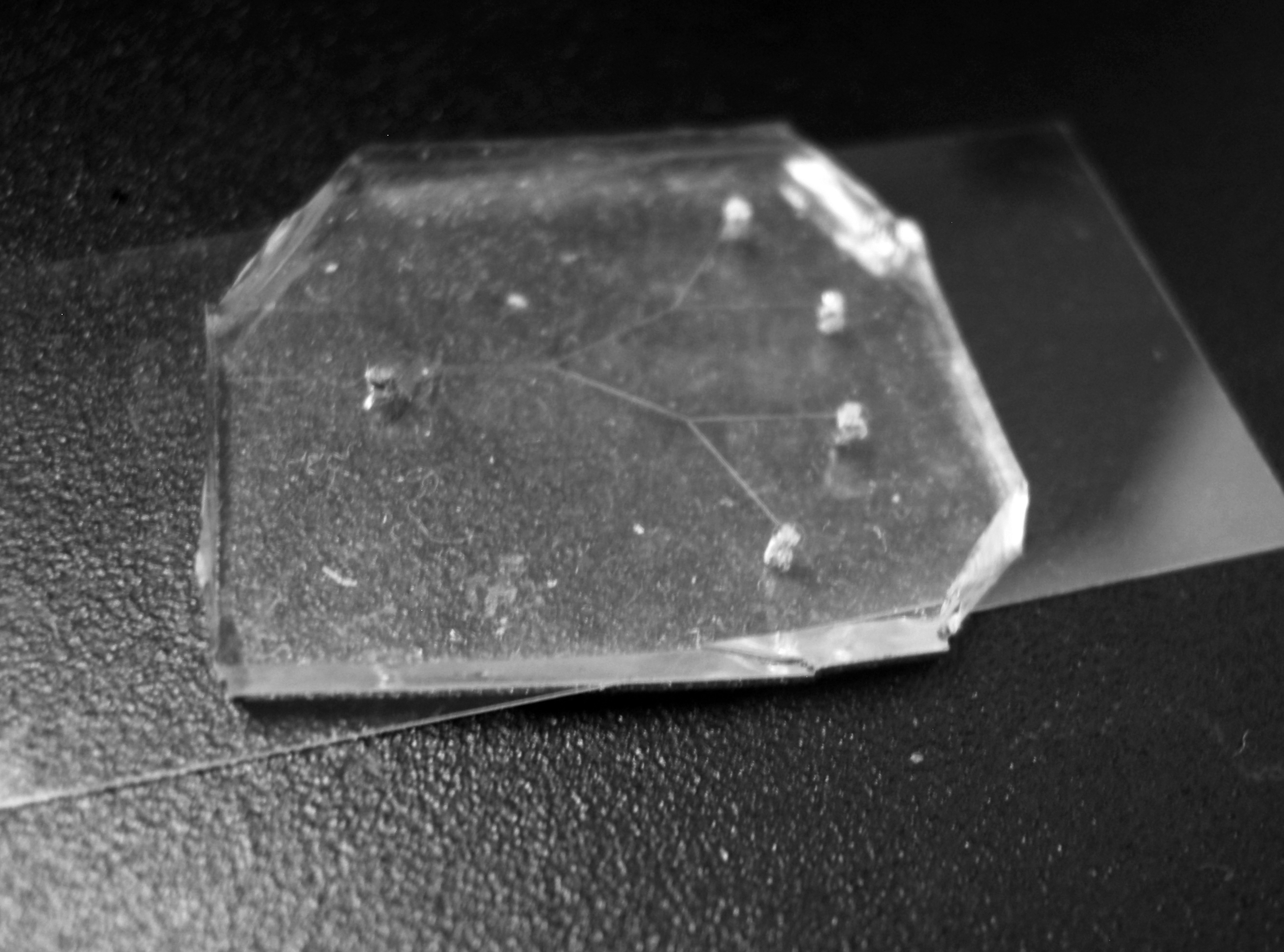 "The idea is that nanoparticles with a magnetic core can float through the naturally occurring fluid in the ducts and be pulled by a magnet as opposed to being pushed with pressure," he said. "We think they could reach all the way to the back of the ducts, where it is believed most breast cancers originate. Of course, we are only at the earliest stages and many tests need to be done."

Such tests could not be done using standard models that grow cells across a flat surface in a plastic dish, so the team created the artificial organlike model in which living cells line a three-dimensional replica of the smallest portions of the mammary ducts.

Leary is internationally known for his nanofabrication work using photolithography to build tiny, precise structures on thin pieces of silicon to create high-speed cell sorting and analysis tools. He used the same techniques to build a mold of branching channels out of a rubberlike material called polydimethylsiloxane. The channels are about 5 millimeters long of various diameters from 20 microns to 100 microns, roughly the diameter of a human hair, that match what is found near the end of the mammary duct system.

Lelièvre, whose group is one of the few in the world able to successfully grow the complicated cells that line the mammary ducts, coaxed the cells to grow within the mold and behave as they would within a real human breast.

"The cells within the breast ductal system have a very specific organization that has proven difficult to obtain in a laboratory," Lelièvre said. "The cells have different sides, and one side must face the wall of the duct and the other must face the inner channel. Reproducing this behavior is very challenging, and it had never been achieved on an artificial structure before."

The team coated the mold in a protein-based substance called laminin 111 as a foundation for the cells that allows them to attach to the mold and behave as they would inside the body, Lelièvre said.

Because injecting the delicate cells into the finished channels of the mold caused too much damage, the team created a removable top for the channels.

"The design of the U-shaped channels and top was necessary for us to be able to successfully apply the cells, but it also allows us to make changes quickly and easily for different tests," Lelièvre said. "We can easily introduce changes among the cells or insert a few tumor cells to test the abilities of the nanoparticles to recognize them. The design also makes it very easy to evaluate the results as the entire model fits under a microscope."

A paper detailing the team's work, which was funded by the U.S. Department of Defense, is published in the current issue of Integrative Biology. In addition to Lelièvre and Leary, co-authors include graduate student Meggie Grafton, research associate Lei Wang and postdoctoral researcher Pierre-Alexandre Vidi.

The team has demonstrated that nanoparticles can be moved within the bare channels of the mold filled with fluid, but has not yet moved nanoparticles through the finished model lined with living cells, Lelièvre said.

The team next plans to create and test nanoparticles with a slippery surface that will prevent them from sticking to the cells as they travel through the channels and coatings that contain antibodies to target and attach to specific types of cancerous and precancerous cells, she said.

"Although we are at the very beginning stages of this work, we are hopeful that this nanomedical approach will one day save lives and provide patients with an easier road to recovery," Lelièvre said. "The successful creation of this model is an important milestone in this work and it is a testament to what can be accomplished through multidisciplinary research."

Lelièvre and Leary are both members of the Purdue Center for Cancer Research and the Oncological Sciences Center. Leary also is a member of the Birck Nanotechnology Center and Bindley Bioscience Center at Purdue's Discovery Park.

Breast On-a-Chip: Mimicry of the Channeling System of the Breast
for Development of Theranostics

Improved detection and therapy of breast neoplasia might benefit from nanodevices traveling inside mammary ducts. However, the decreasing size of branched mammary ducts prevents access to remote areas of the ductal system using a pressure-driven, fluid-based approach. Magnetic field guidance of superparamagnetic submicron particles (SMPs) in a stationary fluid might provide a possible alternative but it is critical to first reproduce the breast ductal system to assess the use of such devices for future therapeutic and diagnostic ("theranostic") purposes. Here we describe the engineering of a portion of a breast ductal system using polydimethylsiloxane (PDMS) microfluidic channels with a total volume of 0.09 microliters. A magnet was used to move superparamagnetic/fluorescent SMPs through a static fluid inside the microchannels. Non-neoplastic mammary epithelial S1 cells developed basoapical polarity as a flat monolayer on the PDMS surface when cultured in the presence of laminin 111, and incubation with SMPs did not result in detectable toxicity. Cells could not withstand the fluid pressure if microinjected directly in completed channels. Whereas, they readily covered laminin 111-coated PDMS surfaces when cultured in U-shaped "hemichannels" before completing the channels. This breast on-a-chip model represents a critical step towards the mimicry of the tree-like ductal system of the breast for further testing and targeting of SMPs.