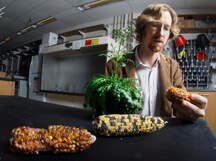 Brian Dilkes was part of a team that determined that plant physical defects can be predicted based on chromosome imbalances. (Purdue Agricultural Communication photo/Tom Campbell)

WEST LAFAYETTE, Ind. - Physical defects in plants can be predicted based on chromosome imbalances, a finding that may shed light on how the addition or deletion of genes and the organization of the genome affects organisms, according to a study involving a Purdue University researcher.

The findings identify easily measured characteristics that vary with imbalances of specific chromosomes, said Brian Dilkes, a Purdue assistant professor of horticulture. Understanding why and how those imbalances result in certain characteristics could open the door to correcting those defects in not only plants, but also in animals and humans.

A classic example in humans is in Down syndrome, which is caused by an extra copy of chromosome 21.

"The ability of an organism to replicate and pass on all its genes is incredibly important," Dilkes said. "What we've found is that genes are sensitive to their dose relative to the rest of the genome. When that balance is disrupted, the organisms fail."

In plants, an imbalance in chromosome number can cause defects in stems, leaves, flowers and other physical features. Understanding how those imbalances cause changes could allow scientists to manipulate plant traits to increase biomass for fuels or other purposes.

"By learning the rules, we can predict the outcome of adding or deleting a gene from an organism," Dilkes said. "We see predictable physical consequences for variation in chromosome dosages. This problem is tractable."

Dilkes, a co-author of the findings released in the early online version of the journal Genetics, was part of a team as a project scientist at the University of California-Davis Genome Center that studied chromosome dosage in the research plant Arabidopsis thaliana. The team used naturally occurring and laboratory-created plants with multiple copies of each chromosome, called polyploids, and then crossed them to create aneuploids, or plants with an irregular number of chromosomes.

The aneuploids, which had either an excess or deficiency of a chromosome, were tested to see which chromosomes were deficient or excessive. Those plants were then phenotyped, recording their physical characteristics. The phenotypes and chromosome imbalances were compared, and it became clear that more or less of particular chromosomes corresponded to specific phenotypic characteristics.

In a surprising turn, the team found that chromosomal imbalance resulted in abnormal traits expressed in its offspring. Plants with a normal number of chromosomes that were descended from plants with chromosome imbalances should have been normal but still displayed abnormal characteristics.

"Something about those chromosomes is different," Dilkes said. "We have no idea what that something is, but it suggests there are multigenerational consequences to changes in chromosome dosage. The DNA sequence says these plants should be perfectly normal, but they are not."

Dilkes said future research would focus on chromosome imbalances in crop plants such as corn and trying to understand how the excess or deficiency of a gene leads to a particular phenotypic characteristic.

Aneuploid cells are characterized by incomplete chromosome sets. The resulting imbalance in gene dosage has phenotypic consequences, specific to each karyotype. Even in the case of Down syndrome, the most viable and studied form of human aneuploidy, the mechanisms underlying the connected phenotypes remain mostly unclear. Because of their tolerance to aneuploidy, plants provide a powerful system for a genome-wide investigation of aneuploid syndromes, an approach that is not feasible in animal systems. Indeed, in many plant species, populations of aneuploid individuals can be easily obtained from triploid individuals. We phenotyped a population of Arabidopsis thaliana aneuploid individuals containing 25 different karyotypes. Even in this highly heterogeneous population, we demonstrate that certain traits are strongly associated with the dosage of specific chromosome types and that chromosomal effects can be additive. Further, we identified subtle developmental phenotypes expressed in the diploid progeny of aneuploid parent(s) but not in euploid controls from diploid lineages. These results indicate that long-term phenotypic consequences of aneuploidy can persist after chromosomal balance has been restored. We verified the diploid nature of these individuals by whole-genome sequencing and discuss the possibility that trans-generational phenotypic effects stem from epigenetic modifications passed from aneuploid parents to the diploid progeny.