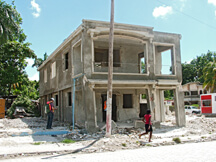 Santiago Pujol, at far left, an assistant professor of civil engineering at Purdue, surveys a private residence damaged in Haiti's earthquake. The building was among 170 surveyed by civil engineers studying the effects of the January 2010 earthquake. The researchers have concluded that a relatively simple system could be used by officials to decide how to modify existing buildings and construct new ones that would hold up better against future earthquakes. (Purdue University photo/Kari T. Nasi)

WEST LAFAYETTE, Ind. - Civil engineers studying the effects of Haiti's devastating earthquake have concluded that a relatively simple system could be used by officials to quickly decide how to modify existing buildings and construct new ones that would better withstand future quakes.

The system, which uses a priority index to rank reinforced concrete buildings according to their seismic vulnerability, originally was developed in Japan and later adapted for use in Turkey by researchers at Purdue University.

A recent study has shown that the system also is applicable to Haiti. The indexing system could be used to identify which buildings need to be strengthened and to guide the construction of new structures, said Santiago Pujol, a Purdue assistant professor of civil engineering.

The system represents a practical method to improve the earthquake resistance of buildings, he said.

"As far as I know, this method is the most efficient way to classify large numbers of buildings by seismic vulnerability," said Pujol, who worked with Ayhan Irfanoglu, also an assistant professor of civil engineering at Purdue, former Purdue graduate student Patrick O'Brien and researchers at the University of Washington in Seattle.

Such a system might be the only practical way to make buildings safer in the face of the rapid rebuilding that may be impossible to control using conventional engineering standards.

"It is very easy to implement and wouldn't necessarily require long and costly analyses," Irfanoglu said. "They can do this very quickly. "

The researchers surveyed 170 buildings damaged in the January 2010 earthquake. About 40 percent of the buildings were heavily damaged, and findings showed that about 90 percent of those damaged structures would have been classified as vulnerable if the system had been in use.

"What the index tells you is that for a given-size building, the smaller the columns and the fewer the walls between the columns, the more likely the building is to have severe damage," Irfanoglu said. "Its strength is in its simplicity and the ease of measuring it in the field."

The index is a ratio of the combined cross sectional areas of all of the ground-story columns and walls compared to a building's total usable floor area.

A common flaw seen in the buildings is referred to as "captive columns," where a wall is attached to a column but does not extend as high as the column, leaving a portion of the column unsupported. This configuration, often seen in school buildings, results in severe damage to the unsupported segment of the columns.

The flaw is widespread in Haiti, as well as China, Latin America, Turkey and many other countries, but buildings could easily be strengthened by reconfiguring the "partial-height" walls, Pujol said.

About 60 percent of the 170 buildings had captive columns.

The researchers presented findings earlier this month during a meeting of officials from the National Science Foundation's Rapid Response Research program. The system could be used immediately in Haiti.

"We are sharing it with engineers at Haiti's Ministry of Public Works, and we hope they will be interested in using it," Irfanoglu said.

Two Haitian civil engineers, Roby Douilly and Steve Symithe, participated in the work and now are graduate students at Purdue, working with professors Eric Calais and Jennifer Haase in the Department of Earth and Atmospheric Sciences.

Providing critical support and access to the buildings were professor Yves Fritz Joseph of the National Laboratory for Buildings and Construction and Dieuseul Anglade of the Bureau of Mines and Energy, both under the Ministry of Public Works.

Mendelking "Val" Phanor, a teenager who was orphaned by the earthquake, worked as a translator and guide. The teen's parents, a brother and sister died in the Jan. 12 earthquake.