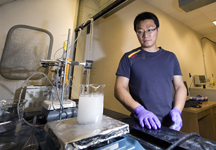 Purdue doctoral student Go Choi watches hydrogen being generated in a new process to extract the gas from seawater. The hydrogen could then be used to run engines in boats and ships, representing a potential replacement for gasoline and diesel fuel in marine applications. (Purdue University photo/Mark Simons)

WEST LAFAYETTE, Ind. - Researchers have developed a method that uses aluminum and a liquid alloy to extract hydrogen from seawater to run engines in boats and ships, representing a potential replacement for gasoline and diesel fuel in marine applications.

The technique had previously worked only for freshwater, but a new formulation also enables the method to generate hydrogen from seawater, said Jerry Woodall, a Purdue University distinguished professor of electrical and computer engineering.

Hydrogen generated by the technology could be fed directly to an internal combustion engine.

"This is important because it might have many marine applications, including cruise ships and tankers," said Woodall, who is working with doctoral student Go Choi.

The method makes it unnecessary to store or transport hydrogen - two major challenges in using hydrogen for ships and vehicles, Woodall said.

"We generate the hydrogen on demand, as you need it," Woodall said. "It also eliminates the need to store fresh water when used for marine applications."

Because waste produced in the process could be recycled using wind turbines and solar cells, the technology also represents a new way of storing energy from solar and wind power, he said.

"Being unable to store energy from wind and solar has been a major limitation for those technologies because they don't work very well when the sun isn't shining and the wind isn't blowing," he said. "But if we converted energy from wind and solar into fuel for hydrogen-generation, we would, in effect, be solving this problem because the hydrogen could then be used to generate electricity, to run engines or fuel cells."

Researchers led by Woodall have been developing aluminum-based alloys that generate hydrogen from water, first reporting on the approach in 2007. The Purdue Research Foundation has filed a separate provisional patent application on the new process for seawater and also holds title to the original patent application filed in 2007 for the freshwater process. The researchers also have presented peer-reviewed papers on the overall technology.

The aluminum splits water by reacting with the oxygen atoms in water molecules, liberating hydrogen in the process. The waste product, aluminum hydroxide, can be recycled back to aluminum using existing commercial processes.

"Since aluminum is low-cost, abundant and has an energy density larger than coal, this technology can be used on a global scale and could greatly reduce the global consumption of fossil fuels," Woodall said. "Also, by co-locating a solar farm or wind turbine complex and an aluminum smelter at a utilities plant, the smelter could be operated around the clock using utility electricity during off-peak times."

The material is made of tiny grains of aluminum surrounded by an alloy containing gallium, indium and tin, which is liquid at room temperature. The liquid alloy dissolves the aluminum, causing it to react with seawater and release hydrogen, Woodall said.

"This is important because being able to generate hydrogen with bulk aluminum makes the method practical, whereas using powder is too expensive and cumbersome," Woodall said. "We believe the process is economically competitive with conventional fuels for transportation and power generation."

A key to developing the technology is controlling the microscopic structure of the solid aluminum and the gallium-indium-tin alloy mixture.

"This only works because there is liquid gallium between the grains of aluminum, which dissolves the aluminum bit by bit," he said. "The dissolved aluminum then reacts with water to release hydrogen."

The formulation contains 90 percent aluminum and 10 percent of the liquid alloy. The reaction also produces heat, which could be harnessed to generate electricity.

The work has been supported by the Purdue Research Foundation-managed Trask Innovation Fund. The researchers hope to conduct further work to study the process and are seeking funding and external interest in commercialization.

Note to Journalists: A video describing how the hydrogen-producing technology works is available online at https://hydrogen.ecn.purdue.edu