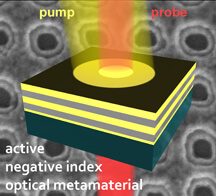 This illustration shows the structure of a new device created by Purdue researchers to overcome a fundamental obstacle in using new "metamaterials" for radical advances in optical technologies, including ultrapowerful microscopes and computers and a possible invisibility cloak. The material developed by the researchers is a perforated, fishnet-like film made of repeating layers of silver and aluminum oxide. The researchers etched away a portion of the aluminum oxide between silver layers and replaced it with a "gain medium" to amplify light. (Birck Nanotechnology Center, Purdue University)

WEST LAFAYETTE, Ind. — Researchers have overcome a fundamental obstacle in using new "metamaterials" for radical advances in optical technologies, including ultra-powerful microscopes and computers and a possible invisibility cloak.

The metamaterials have been plagued by a major limitation: too much light is "lost," or absorbed by metals such as silver and gold contained in the metamaterials, making them impractical for optical devices.

However, a Purdue University team has solved this hurdle, culminating three years of research based at the Birck Nanotechnology Center at the university's Discovery Park.

"This finding is fundamental to the whole field of metamaterials," said Vladimir M. Shalaev, Purdue's Robert and Anne Burnett Professor of Electrical and Computer Engineering. "We showed that, in principle, it's feasible to conquer losses and develop these materials for many applications."

Research findings are detailed in a paper appearing on Aug. 5 in the journal Nature.

The material developed by Purdue researchers is made of a fishnet-like film containing holes about 100 nanometers in diameter and repeating layers of silver and aluminum oxide. The researchers etched away a portion of the aluminum oxide between silver layers and replaced it with a "gain medium" formed by a colored dye that can amplify light.

Other researchers have applied various gain media to the top of the fishnet film, but that approach does not produce sufficient amplification to overcome losses, Shalaev said.

Instead, the Purdue team found a way to place the dye between the two fishnet layers of silver, where the "local field" of light is far stronger than on the surface of the film, causing the gain medium to work 50 times more efficiently.

Unlike natural materials, metamaterials are able to reduce the "index of refraction" to less than one or less than zero. Refraction occurs as electromagnetic waves, including light, bend when passing from one material into another. It causes the bent-stick-in-water effect, which occurs when a stick placed in a glass of water appears bent when viewed from the outside.

Being able to create materials with an index of refraction that's negative or between one and zero promises a range of potential breakthroughs in a new field called transformation optics. Possible applications include a "planar hyperlens" that could make optical microscopes 10 times more powerful and able to see objects as small as DNA; advanced sensors; new types of "light concentrators" for more efficient solar collectors; computers and consumer electronics that use light instead of electronic signals to process information; and a cloak of invisibility.

Excitement about metamaterials has been tempered by the fact that too much light is absorbed by the materials. However, the new approach can dramatically reduce the "absorption coefficient," or how much light and energy is lost, and might amplify the incident light so that the metamaterial becomes "active," Shalaev said.

"What's really important is that the absorption coefficient can be as small as only one-millionth of what it was before using our approach," Shalaev said. "We can even have amplification of light instead of its absorption. Here, for the first time, we showed that metamaterials can have a negative refractive index and amplify light."

Fabricating the material was a major challenge, Shalaev said.

First, the researchers had to learn how to precisely remove as much as possible of the aluminum oxide layer in order to vacate space for dye without causing a collapse of the structure.

"You remove it almost completely but leave a little bit to act as pillars to support the structure, and then you spin coat the dye-doped polymer inside the structure," he said.

The researchers also had to devise a way to deposit just the right amount of dye mixed with an epoxy between the silver layers of the perforated film.

"You can't deposit too much dye and epoxy, which have a positive refractive index, but only a thin layer about 50 nanometers thick, or you lose the negative refraction," Shalaev said.

Future work may involve creating a technology that uses an electrical source instead of a light source, like semiconductor lasers now in use, which would make them more practical for computer and electronics applications.

The work was funded by the U.S. Army Research Office and the National Science Foundation.

School of Electrical and Computer Engineering and
Birck Nanotechnology Center

The recently emerged fields of metamaterials and transformation optics are considered to be a new paradigm for the science of light, a paradigm that promises a family of exciting applications ranging from cloaking to optical imaging with deeply subwavelength resolution to nanophotonics with the potential for much faster information processing [1-2]. The possibility of creating optical negative-index metamaterials (NIMs) using nanostructured metal-dielectric composites has triggered intense basic and applied research over the past several years [3-10]. However, the  performance of all NIM applications is significantly limited by the inherent and strong energy dissipation in metals, especially in the near infrared and visible wavelength ranges [11-12]. Generally, the losses are orders of magnitude too large for the envisioned applications, and the reduction of losses with optimized designs appears to be out of reach. One way of addressing this issue is to incorporate gain media into NIM designs  [13-16]. However, whether NIMs with low loss can be achieved has been the subject of theoretical debate [17-18]. Here we experimentally demonstrate that the incorporation of gain material in the high-local-field areas of a metamaterial enables extremely low-loss and active optical NIMs. The original loss-limited negative refractive index and the figure of merit (FOM) of the device have been dramatically improved with loss compensation in the visible wavelength range. At a wavelength of 737 nm, the negative refractive index improves from -0.66 to -1.017, and the FOM increases from 1 to 26. In a wavelength range around 738 nm, the FOM is expected to become macroscopically large, on the order of 106. The NIM is active in a range between 722 nm and 738 nm. This study demonstrates conclusively and for the first time an optical metamaterial that is not limited by the inherent loss of its metal constituent.