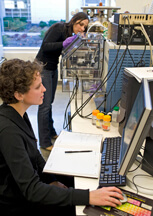 WEST LAFAYETTE, Ind. — Studies by a Purdue University-led team have revealed a potential marker for prostate cancer that could be the starting point for less invasive testing and improved diagnosis of the disease.

"It was surprising to find a single compound that is distinctly present in cancerous tissue and not present in healthy tissue," said Cooks, who is co-director of Purdue's Center for Analytical Instrumentation Development. "We've been able to differentiate cancerous from healthy tissue using this new method in the past, but the difference was in the amounts of the same chemical compounds found in healthy tissue. There was no single differentiator of which one could say if it was present there was cancerous tissue."

Ratliff said this characteristic makes the compound a potential marker for the disease, which could lead to new blood or urine tests to screen for prostate cancer.

"Aside from skin cancer, prostate cancer is the most common cancer in men and is the second leading cause of cancer-related deaths," Ratliff said. "Unfortunately, the current screening test has a significant number of false positives because it uses a marker that is present with other non-cancerous conditions. As a result, many men have unnecessary biopsies, which are invasive, expensive and have the potential to cause infection. This new compound appears to be highly specific to prostate cancer cells, which would mean very few false positives."

The current prostate cancer test screens for a protein called prostate-specific antigen, or PSA, that is produced by the cells of the prostate. Elevated levels of PSA in the blood can signify prostate cancer, but non-cancerous conditions such as an enlarged or inflamed prostate also cause an increase in its levels, he said.

The findings of the study, which was funded by the Purdue University Center for Cancer Research and the National Institutes of Health, were published in the journal Analytical Chemistry.

The study was performed in collaboration with physician scientists from Indiana University School of Medicine, who co-authored the paper. They also provided the tissue samples and pathological analysis of the samples to check the new technique’s results.

The team used a mass spectrometry analysis technique developed by Cooks and coworkers called desorption electrospray ionization, or DESI, to measure and compare the chemical characteristics of 68 samples of normal and cancerous prostate tissue.

Mass spectrometry works by first turning molecules into ions, or electrically charged versions of themselves, so that they can be identified by their mass. Conventional mass spectrometry requires chemical separations, manipulations of samples and containment in a vacuum chamber for ionization and analysis. The DESI technique eliminates these requirements by performing the ionization step in the air or directly on surfaces outside of the mass spectrometers, making the process much simpler, faster and more applicable to medical examination or surgical settings.

Cooks' research team also has developed software that turns the distribution and intensity of selected ions within a sample into a computer-generated image, much like what would be seen from a stained slide under the microscope. This chemical map of the sample can precisely show the location of cancerous tissue and the borders of tumors, Cooks said.

Livia Eberlin, co-author of the paper and a graduate student in Cooks' group, said the study showed promise in detecting precancerous lesions, as well.

"The DESI examination was able to distinguish a precancerous lesion in a small area of a sample made up of mostly healthy tissue," Eberlin said. "By evaluating the difference in the chemistry of cells, this technique can detect differences in diseased tissue that are otherwise indistinguishable. It could provide a new tool for pathologists to complement microscopic examination."

The team also plans to study differences in the chemistry of different types of prostate cancer tumors to see if there is a way to identify which are aggressive and which are not, she said.

Ratliff said the inability to tell the difference between aggressive and nonaggressive forms of prostate cancer causes problems in its treatment.

"A nonaggressive form of prostate cancer can be very slow to progress, and sometimes it is in the best interest of the patient not to go through rigorous treatments that reduce one's quality of life," he said. "The tests currently used to determine the probability that the cancer is an aggressive form are not very accurate, and about 30 percent of patients are misdiagnosed as having an aggressive form."

The team is already in the process of performing larger studies and plans to investigate the biological processes responsible for the expression of cholesterol sulfate in cancerous tissue.

Development of methods for rapid distinction between cancerous and non-neoplastic tissues is an important goal in disease diagnosis. To this end, desorption electrospray ionizaiton mass spectrometry (DESI-MS) imaging was applied to analyze the lipid profiles of this tissue sections of 68 samples of human prostate cancer and normal tissue. The disease state of the tissue sections was determined by independent histopathological examination. Cholesterol sulfate was identified as a differentiating compound, found almost exclusively in cancerous tissues including tissue containing precancerous lesions. The presence of cholesterol sulfate in prostate tissues might serve as a tool for prostate cancer diagnosis although confirmation through larger and more diverse cohorts and correlations with clinical outcome data is needed.