Lake sturgeon have genes from parasite, signs of human STD 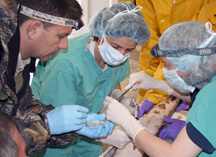 Andrew DeWoody, at left, works with Cornell surgeons to collect lake sturgeon gonad biopsies. During the study, DeWoody and postdoctoral associate Matthew C. Hale found evidence of trematode genes in the sturgeon genome and of a protozoan parasite that causes a sexually transmitted disease in humans. (Purdue University photo/Anna Fahey)

WEST LAFAYETTE, Ind. - While trying to find a DNA-based test to determine the sex of lake sturgeon, Purdue University researchers found that the sturgeon genome contains trematode genes that didn't originally belong to it and may harbor a protozoan parasite that causes a sexually transmitted disease in humans.

Genetics professor Andrew DeWoody and postdoctoral associate Matthew C. Hale found the parasite and pathogen genes while analyzing DNA from the gonads of lake sturgeon, a species that is on the decline because of overfishing and pollution of its habitats. The only way to determine a lake sturgeon's sex currently is to examine its internal sexual organs.

DeWoody said about 15 genes found in the lake sturgeon came from Schistosoma, a parasitic worm. Lateral gene transfer from one organism to another is rare, especially in multicellular animals, he said, but could be part of some evolutionary process for the sturgeon.

"Organisms may accept some new genes from other species because the new genes can serve as raw material for evolution," said DeWoody, whose findings were reported in the early online version of the journal Genetica. "The genome may be more fluid than we usually think."

Hale said genes often work in combination, and new genes may one day become involved with other genes to help the lake sturgeon create new traits needed to adapt to changes in its environment.

"It isn't necessarily a bad thing for the sturgeon. It probably doesn't have a cost," Hale said. "It's either neutral or has a benefit or it wouldn't be there."

While lateral gene transfer from a trematode worm could ultimately benefit the lake sturgeon, evidence of the Trichomonas pathogen is more likely to have a negative effect. According to the Centers for Disease Control and Prevention, a human version of this pathogen causes Trichomoniasis, a common sexually transmitted disease that mostly affects women and can cause pregnant women to deliver early or have children with lower birthweights.

The finding is the first suspected case of Trichomonas in a fish, DeWoody said. While it's unclear how the parasite might affect lake sturgeon, DeWoody said it could negatively impact the fish's reproductive ability, which is especially alarming in a species of conservation concern.

"If it has the same effect in lake sturgeon as it does in humans, that wouldn't be good," he said.

Since lake sturgeon populations are declining and endangered in some places, a less invasive procedure to determine sex would be valuable for those studying lake sturgeon and potentially other species of sturgeon that are similarly threatened. DeWoody and Hale were able to identify a gene thought to play a role in sex determination, but it was found to be expressed in both males and females.

Next, DeWoody and Hale would like to determine the effect - if any - the Trichomonas parasite has on lake sturgeon.

Hale said lake sturgeon can live more than 100 years, and females do not reach sexual maturity for more than 20 years. Even then, they only lay eggs about every five years. Understanding how a pathogen or humans are affecting the sturgeon could be key to conserving them.

"Humans can have an effect very quickly and very easily on the sturgeon population," Hale said.

The Great Lakes Fishery Trust and the Indiana Department of Natural Resources funded the study.

Modern pyrosequencing has the potential to uncover many interesting aspects of genome evolution, even in lineages where genomic resources are scarce. In particular, 454 pyrosequencing of nonmodel species has been used to characterize expressed sequence tags, xenobiotics, gene ontologies, and relative levels of gene expression. Herein, we use pyrosequencing to study the evolution of genes expressed in the gonads of a polyploid fish, the lake sturgeon (Acipenser fulvescens). Using 454 pyrosequencing of transcribed genes, we produced more than 125 MB of sequence data from 473,577 high-quality sequencing reads. Sequences that passed stringent quality control thresholds were assembled into 12,791 male contigs and 32,629 female contigs. Average depth of coverage was 4.29 for the male assembly and 5.59 for the female assembly. Analytical rarefaction indicates that our assemblies include most of the genes expressed in lake sturgeon gonads. Over 86,700 sequencing reads were assigned gene ontologies, many to general housekeeping genes like protein, RNA, and ion binding genes. We searched specifically for sex-determining genes and documented significant sex differences in the expression of two genes involved in animal sex determination, DMRT1 and TRA-1. DMRT1 is the master sex-determining gene in birds and in medaka (Oryzias latipes) whereas TRA-1 helps direct sexual differentiation in nematodes. We also searched the lake sturgeon assembly for evidence of xenobiotic organisms that may exist as endosymbionts. Our results suggest that exogenous parasites (trematodes) and pathogens (protozoans) apparently have infected lake sturgeon gonads, and the trematodes have horizontally transferred some genes to the lake sturgeon genome.