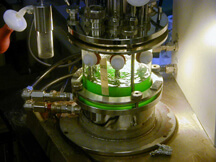 Researchers are growing algae in a "bioreactor" at Purdue as part of a federally funded effort aimed at creating genetically engineered algae for biodiesel production. (Purdue School of Chemical Engineering photo/John Morgan)

Currently, hydrocarbon fuels such as diesel and gasoline require complex chemical processing to be manufactured and are made primarily from non-renewable fossil fuels, which are being depleted, whereas the single-cell algae use photosynthesis and are renewable resources, said John Morgan, an associate professor of chemical engineering at Purdue.

The Purdue portion of the work focuses on creating algae that produce more lipids, the precursor of biofuels. The algae harness solar energy to make lipids from carbon dioxide in the atmosphere.

"Algae now store some of their carbon as lipids, but not enough to be useful in producing biodiesel," Morgan said. "We need to genetically engineer them to increase the amount of lipids they accumulate."

The three-year project is funded with a grant of more than $4 million from U.S. Department of Energy and is led by Martin Spalding, a professor in the Department of Genetics, Development and Cell Biology at Iowa State. About $1 million of the grant, which is part of the American Recovery and Reinvestment Act, is funding Purdue's portion of the research, which began earlier this year.

"The grant was highly competitive, with only 1 percent of applicants being selected," said Arvind Varma, Purdue's R. Games Slayter Distinguished Professor of Chemical Engineering and head of the School of Chemical Engineering. "It's important work that aims to reduce our reliance on fossil fuels and our carbon footprint."

The algae are being grown in a "bioreactor" in Morgan's laboratory in the Forney Hall of Chemical Engineering. Algae carry out photosynthesis using energy from light to convert carbon dioxide into a variety of products, including lipids.

"The carbon dioxide is routed in many directions to produce various products, and we are trying to maximize traffic in the specific pathway that leads to lipid storage," Morgan said. "We want to maximize the accumulation of lipids, which can then be harvested and turned into biodiesel."

The Purdue group will create "flux maps" that reveal the speed of reactions along many "metabolic pathways" inside algae, information that should enable researchers to engineer algae to store more lipids.

Other researchers in the project will focus on creating algae that thrive in higher temperatures than natural algae can tolerate. The elevated temperature kills contaminants that hinder algae growth. Another facet of the work will focus on increasing "carbon dioxide assimilation," the first of many steps leading to lipid storage.

Additional information about the project is available at https://www.news.iastate.edu/news/2010/feb/spaldinggrant