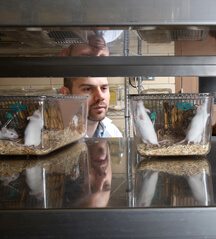 WEST LAFAYETTE, Ind. - For decades, the traditional practice in animal testing has been standardization, but a study involving Purdue University has shown that adding as few as two controlled environmental variables to preclinical mice tests can greatly reduce costly false positives, the number of animals needed for testing and the cost of pharmaceutical trials.

Joseph Garner, a Purdue assistant professor of animal sciences, said the finding challenges the assumption in drug discovery and related fields that animal experiments should eliminate all variables. He said that despite standardization efforts, two experiments in different labs could never truly be exactly the same because of uncontrollable variables such as the scent of the researchers or background noises.

"Human drug trials get around this problem by deliberately including variability in the experiment in a controlled manner so that the effect of a drug can be tested across a variable human population," Garner said.

"Overall, the differences between experiments are much, much greater in the standardized setups than in the ones where we deliberately varied the environment as if the experiment was a human drug trial," said Garner, whose results were published in the current issue of the journal Nature Methods. "In fact, the traditional standardized experiments generally disagreed with each other, while the experiments designed like a human drug trial generally agreed with each other."

The study is a follow-up of another published last year in Nature Methods in which Garner, Hanno Würbel, a co-author on the papers and professor at the University of Giessen in Germany, and Helene Richter, Würbel's graduate student, suggested that adding controlled variation to animal experiments would lead to more accurate results. Garner said the original study, which demonstrated the idea in principle, had met resistance because it was unclear what environmental features scientists should vary to improve study results.

"In theory, if you introduce enough variables, it shouldn't matter what they are because you create spread in the mice. But other scientists were reasonable to ask whether this would be a practical approach. So, in this experiment, we wanted to address this concern and see whether it was logistically feasible to add enough variation to make the approach work." Garner said. "We were surprised by how little variation we needed to add. In fact, we found that using as few as two variables, regardless of what we actually varied, was enough to virtually eliminate disagreement between laboratories. Given our previous results, this should reduce the incidence of false positives five to tenfold."

Reducing false positives could be worth billions of dollars in the pharmaceutical industry where the cost of human clinical trials is high. Garner said about 90 percent of drugs thought to be effective in mice fail in human trials. Reducing the number of drugs that won't be successful could eliminate hundreds of millions of dollars per drug in some cases and reduce the cost of research and development.

"The real cost of producing a drug is the cost of all the drugs that were tested and failed at the same time, and this cost is passed on to the consumer," Garner said. "Weeding out these failures in animal trials could transform the economics of drug development."

Garner analyzed data from a series of behavioral tests Würbel performed in Germany. The tests compared behaviors commonly used in drug and gene discovery between two strains of mice. The experiment was repeated in four different model laboratories, each of which differed according to variables such as background noise, the age of the mice, lighting levels and cage size. In each laboratory, standardized mice were treated identically - as they would be in a traditional experiment – while heterogenized mice were tested in four different conditions made by varying two environmental variables in a controlled manner, just like a human drug trial.

Mice from the same strain should have exhibited the same behavior in each laboratory, such as showing fear and curiosity. However, in 33 of the 36 behavioral characteristics, variation was lower in the heterogenized design than the standardized design, and, on average, the standardized group exhibited as much as five times the variation between laboratories as the heterogenized group.

"The reason why this happens is because when you keep everything standardized, the variation is very low within the lab, but the variation between labs is huge and unpredictable," Garner said. "You would have to do the same experiment in many standardized labs to really know the true result, or you could do it in one lab with a heterogenized design, like a human drug trial, to find the true result. This is a win-win because you need to use far few animals, and you get a much better understanding of whether, for instance, a drug really does have an effect that is replicable."

Garner said the next step in the research is to do the same experiments in different labs across Europe to eliminate the simulation of labs in the experiment. The German Research Foundation funded the study.