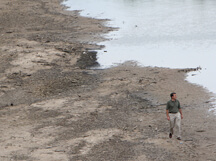 Keith Cherkauer, an assistant professor of agricultural and biological engineering, surveys the Wabash River, one of many that could experience an increase in winter and spring flooding based on rising temperatures in the next century. (Purdue Agricultural Communication photo/Tom Campbell)

WEST LAFAYETTE, Ind. - Several Midwestern states could be facing increased winter and spring flooding, as well as difficult growing conditions on farms, if average temperatures rise, according to a Purdue University researcher.

Keith Cherkauer, an assistant professor of agricultural and biological engineering, ran simulation models that show Indiana, Illinois, Wisconsin and Michigan could see as much as 28 percent more precipitation by the year 2070, with much of that coming in the winter and spring. His projections also show drier summer and fall seasons.

"This was already a difficult spring to plant because of how wet it was. If you were to add another inch or so of rain to that, it would be a problem," said Cherkauer, whose findings were published in the early online version of the Journal of Great Lakes Research. "It could make it difficult to get into fields. There's also a potential for more flooding."

Cherkauer used three different scenarios based on the amount of carbon that could be emitted into the atmosphere in the coming decades. Carbon calculations were based on assumptions including population, technological advancements, the economy and other factors.

Those scenarios were used in two climate projection models from the Intergovernmental Panel on Climate Change that give climate predictions from the years 1950 through 2099. Cherkauer said in years from 1950 to 2007 where actual climate data differed slightly from projections, the difference was subtracted to give a better projection for the future.

Cherkauer estimates that increased precipitation would result in about a 20 percent increase in peak and mean flows for the Wabash River, for instance.

Daily river flow would be lower during the summer and fall despite an expected increase in thunderstorms and heavy-rain events. Overall precipitation would be down in those seasons, he said, and heavy rains from time to time would still leave prolonged periods without precipitation.

"This area is not going to be short of water, but we may not have it at the right times," Cherkauer said. "We probably need to figure out how to store the excess water from the spring so we have it in the summer when we need it."

He said there are several possible avenues for storing spring water, from damming rivers to create reservoirs, to refilling aquifers that are pumped for water in the summer.

Cherkauer said next he wants to study how climate predictions would affect drought conditions, as well as how the projections on stream flow would impact aquatic life and ecology. NASA funded his research.

Cherkauer's work is affiliated with the Purdue Climate Change Research Center and the Center for the Environment in Discovery Park.

Keith A. Cherkauer and Tushar Sinha

The Great Lakes are an important source of fresh water, recreation resource and transportation corridor for the Midwestern United States and Canada. The timing and quantity of fresh water inputs and how those may change under projections of future climate change are important for understanding how conditions, including river flows and lake levels, within the region may be affected. Water quality and the density and diversity of in-stream habitats are responsive to changes in the distribution of daily streamflow, something not typically included in studies of climate change impacts. Projections of precipitation and air temperature changes in the four states surrounding Lake Michigan from the IPCC AR4 were downscaled and bias-corrected before being used to drive a large-scale hydrology model and produce maps of surface runoff and baseflow. These were then routed along drainage networks for regional rivers, and hydrologic metrics describing aspects of the distribution of daily flows important for hydrology and in-stream ecology were computed. The impact of regional climate change projections on early- (water years 2010-2039) and mid-century (water years 2040-2069) streamflow was highly variable; however, by the late-century period (water years 2070-2099) annual streamflow was found to have increased in all rivers. Seasonally, winter and spring flows increased significantly by the late-century period, but summer flows become more variable with a decrease in low-flows and an increase in peak-flows. The number of days with flows above the annual mean-flow (TQmean) decreased in summer, but flashiness (R-B Index) increased.