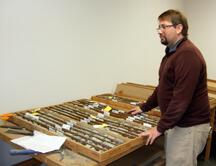 Purdue Earth and Atmospheric Sciences Professor Matthew Huber at the Geological and Nuclear Sciences Core Repository in New Zealand. He is sampling the historical record contained in cores of ocean sediment to better understand the ocean currents of the southern ocean during the Eocene, which helps inform his computer modeling of the ancient climate. (Purdue University photo)

WEST LAFAYETTE, Ind. - How did the lemurs, flying foxes and narrow-striped mongooses get to the large, isolated island of Madagascar sometime after 65 million years ago?

A pair of scientists say their research confirms the longstanding idea that the animals hitched rides on natural rafts blown out to sea.

Professors Matthew Huber of Purdue and Jason Ali of the University Hong Kong say that the prevailing flow of ocean currents between Africa and Madagascar millions of years ago would have made such a trip not only possible, but fast, too. The findings, based on a three-year computer simulation of ancient ocean currents, will be published in the journal Nature on Feb. 4 and were posted on Nature’s Web site Wednesday (Jan. 20).

The idea that animals rafted to the island is not new. Since at least 1915, scientists have used it as an alternative theory to the notion that the animals arrived on Madagascar via a land bridge that was later obliterated by shifting continents. Rafting would have involved animals being washed out to sea during storms, either on trees or large vegetation mats, and floating to the mini-continent, perhaps while in a state of seasonal torpor or hibernation.

Huber and Ali's work supports a 1940 paper by George Gaylord Simpson, one of the most influential paleontologists and evolution theorists of the 20th century. Simpson introduced the concept of a "sweepstakes" process to explain the chance of raft colonization events taking place through vast stretches of geological time. Once the migrants arrived on the world’s fourth largest island, their descendants evolved into the distinctive, and sometimes bizarre forms seen today.

Anthropologists and paleontologists have good reason to be interested in Madagascar's animals. The island is located in the Indian Ocean roughly 300 miles east of Africa over the and is otherwise isolated from significant land masses. Its isolation and varied terrain make it a living laboratory for scientists studying evolution and the impact of geography on the evolutionary process.

Madagascar has more unique species of animals than any location except Australia, which is 13 times larger. The island's population includes 70 kinds of lemurs found nowhere else and about 90 percent of the other mammals, amphibians and reptiles are unique to its 226,656 square miles.

The question has always been how the animals arrived there in the first place. Madagascar appears to have been an island for at least 120 million years, and its animal population began arriving much later, sometime after 65 million years ago.

The raft hypothesis, which scientists refer to as “dispersal,” has always presented one big problem, however. Currents and prevailing winds between Madagascar and Africa flow south and southwest, away from, not toward, the island.

Yet, the land bridge hypothesis also is problematic in that there is no geologic evidence that such a bridge existed during the time in question. Also, there are no large mammals such as apes, giraffes, lions or elephants, indigenous to Madagascar. Only small species such as lemurs, the island's signature species; hedgehog-like tenrecs; rodents; mongoose-like carnivores; and similar animals populate the island.

The animals of Madagascar also appear to have arrived in occasional bursts of immigration by species rather than in a continuous, mixed migration. They likewise appear to have evolved from single ancestors, and their closest relatives are in Africa, scientists say. All of which suggests Simpson's theory was correct.

Ali, who has a research focus in plate tectonics -- the large-scale motions of the Earth's outer shell -- kept running across the land bridge hypothesis in the course of his work. The question intrigued him because the notion of a bridge between Madagascar and Africa appeared to break rules of plate tectonic theory. A background in oceanography also made him think ocean currents between Africa and Madagascar might have changed over time.

"Critically, Madagascar and Africa have together drifted more than 1,600 kilometers northwards and could thus have disrupted a major surface water current running across the tropical Indian Ocean, and hence modified flow around eastern Africa and Madagascar," says Ali, an earth sciences professor.

That led Ali to contact Huber, a paleoclimatologist who reconstructs and models the climate millions of years in the past. Huber, a Purdue earth and atmospheric sciences professor, has a particular interest and expertise in ocean currents, which have a significant impact on climate.

Huber models ancient conditions at a time when the planet was much warmer than it is today, and he specializes in lengthy, highly detailed simulations. He uses the modeling of a warmer Earth in the past -- warm enough for crocodiles to live in an ice-free Arctic -- to help understand conditions generated by today's global warming and to project what the warming trend may hold for the future.

When Ali contacted him about the Madagascar question, Huber had just finished running a three-year simulation on a supercomputer operated by Information Technology at Purdue (ITaP), Purdue's central information technology organization. The modeling produced 100 terabytes of output -- data with potential uses for a variety of purposes, including a study of ancient ocean currents around Madagascar.

The Purdue professor was able to show that 20 million to 60 million years ago, when scientists have determined ancestors of present-day animals likely arrived on Madagascar, currents flowed east, toward the island. Climate modeling showed that currents were strong enough -- like a liquid jet stream in peak periods -- to get the animals to the island without dying of thirst. The trip appears to have been well within the realm of possibility for small animals whose naturally low metabolic rates may have been even lower if they were in torpor or hibernating.

Huber's computer modeling also indicates that the area was a hotspot at the time, just as it is today, for powerful tropical cyclones capable of regularly washing trees and tree islands into the ocean.

"It seems likely that rafting was a distinct possibility," the study concludes. "All signs point to the Simpson sweepstakes model as being correct: Ocean currents could have transported rafts of animals to Madagascar from Africa during the Eocene."

The raft hypothesis has always been the most plausible, says Anne Yoder, director of the Duke University Lemur Center. She specializes in using molecular biogenetic techniques and geospatial analysis to examine the evolutionary history of Madagascar. But Ali and Huber's study now puts hard data behind it, says the Duke professor of biology, biological anthropology and anatomy.

"I was very excited to see this paper," says Yoder, whom Nature asked to review the study prior to publication. "Dispersal has been a hypothesis about a mechanism without any actual data. This takes it out of the realm of storytelling and makes it science."

Ali says the study also is relevant to the movement of animal species elsewhere on the planet, lending support for dispersal over a competing idea that animals arrived at their positions on the drifting land masses of the continents as the Earth took its current form.

Moreover, the Madagascar study provided a test case confirming scientists' ability to model ocean and atmosphere interactions in a past greenhouse climate, Huber said. The National Science Foundation recently funded Huber to further simulate ocean currents in the Eocene epoch, roughly 39 million to 56 million years ago, using the methodology he applied to Madagascar.

Madagascar hosts one of the world’s most unusual, endemic, diverse and threatened concentrations of fauna. To explain its unique, imbalanced biological diversity, G.G. Simpson proposed the “sweepstakes” hypothesis, according to which the ancestors of Madagascar’s present-day mammal stock rafted there from Africa. This is an important hypothesis in biogeography and evolutionary theory for how animals colonize new frontiers, but its validity is questioned. Studies suggest that currents were inconsistent with rafting to Madagascar and that land bridges provided the migrants’ passage. Here, we show that currents could have transported the animals to the island and highlight evidence inconsistent with the land-bridge hypothesis. Using palaeogeographic reconstructions and palaeo-oceanographic modeling, we find that strong surface currents flowed from northeast Mozambique and Tanzania eastward toward Madagascar during the Palaeogene period, exactly as required by the sweepstakes process. Subsequently, Madagascar advanced north toward the equatorial gyre and the regional current system evolved into its modern configuration with flows westward from Madagascar to Africa. This may explain why no fully non-aquatic land mammals have colonized Madagascar since the arrival of the rodents and carnivorans during the early-Miocene epoch. One implication is that rafting may be the dominant means of overseas dispersal in the Cenozoic era when palaeocurrent directions are properly considered.