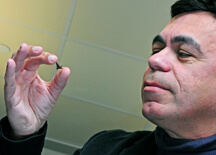 Purdue researchers have created a magnetic "ferropaper" that might be used to make low-cost "micromotors" for surgical instruments, tiny tweezers to study cells and miniature speakers. Babak Ziaie, a professor of electrical and computer engineering and biomedical engineering, holds a miniature birdlike shape made from the material. The wings move slowly, but the structure is not capable of flight. (Purdue University photo/Andrew Hancock)

WEST LAFAYETTE, Ind. - Researchers at Purdue University have created a magnetic "ferropaper" that might be used to make low-cost "micromotors" for surgical instruments, tiny tweezers to study cells and miniature speakers.

The material is made by impregnating ordinary paper - even newsprint - with a mixture of mineral oil and "magnetic nanoparticles" of iron oxide. The nanoparticle-laden paper can then be moved using a magnetic field.

"Paper is a porous matrix, so you can load a lot of this material into it," said Babak Ziaie, a professor of electrical and computer engineering and biomedical engineering.

The new technique represents a low-cost way to make small stereo speakers, miniature robots or motors for a variety of potential applications, including tweezers to manipulate cells and flexible fingers for minimally invasive surgery.

"Because paper is very soft it won't damage cells or tissue," Ziaie said. "It is very inexpensive to make. You put a droplet on a piece of paper, and that is your actuator, or motor."

Once saturated with this "ferrofluid" mixture, the paper is coated with a biocompatible plastic film, which makes it water resistant, prevents the fluid from evaporating and improves mechanical properties such as strength, stiffness and elasticity.

Findings will be detailed in a research paper being presented during the 23rd IEEE International Conference on Micro Electro Mechanical Systems on Jan. 24-28 in Hong Kong. The paper was written by Ziaie, electrical engineering doctoral student Pinghung Wei and physics doctoral student Zhenwen Ding.

Because the technique is inexpensive and doesn't require specialized laboratory facilities, it could be used in community colleges and high schools to teach about micro robots and other engineering and scientific principles, Ziaie said.

The magnetic particles, which are commercially available, have a diameter of about 10 nanometers, or billionths of a meter, which is roughly 1/10,000th the width of a human hair. Ferro is short for ferrous, or related to iron.

"You wouldn't have to use nanoparticles, but they are easier and cheaper to manufacture than larger-size particles," Ziaie said. "They are commercially available at very low cost."

The researchers used an instrument called a field-emission scanning electron microscope to study how well the nanoparticle mixture impregnates certain types of paper.

"All types of paper can be used, but newspaper and soft tissue paper are especially suitable because they have good porosity," Ziaie said.

The researchers fashioned the material into a small cantilever, a structure resembling a diving board that can be moved or caused to vibrate by applying a magnetic field.

"Cantilever actuators are very common, but usually they are made from silicon, which is expensive and requires special cleanroom facilities to manufacture," Ziaie said. "So using the ferropaper could be a very inexpensive, simple alternative. This is like 100 times cheaper than the silicon devices now available."

The researchers also have experimented with other shapes and structures resembling Origami to study more complicated movements.

The research is based at the Birck Nanotechnology Center in Purdue's Discovery Park.

Note to Journalists: An electronic copy of the research paper and a video showing a bird-shaped specimen moving its wings is available by contacting Emil Venere, Purdue News Service, at 765-494-4709, venere@purdue.edu

In this paper, we report on an inexpensive method for fabricating mm-scale magnetic actuators using ferrofluid impregnated paper. Different types of papers were loaded with light oil-based ferrofluid, cut to cantilever shape, coated with parylene C, and tested with an external magnetic field. Cleanroom and filter paper were able to generate large forces (>40mg equivalent force) whereas soft tissue paper provided the largest deflection (40� tip angle). Coating parylene on ferro-paper not only improves the mechanical properties but also allows the ferro-paper actuator to work in liquid environment.