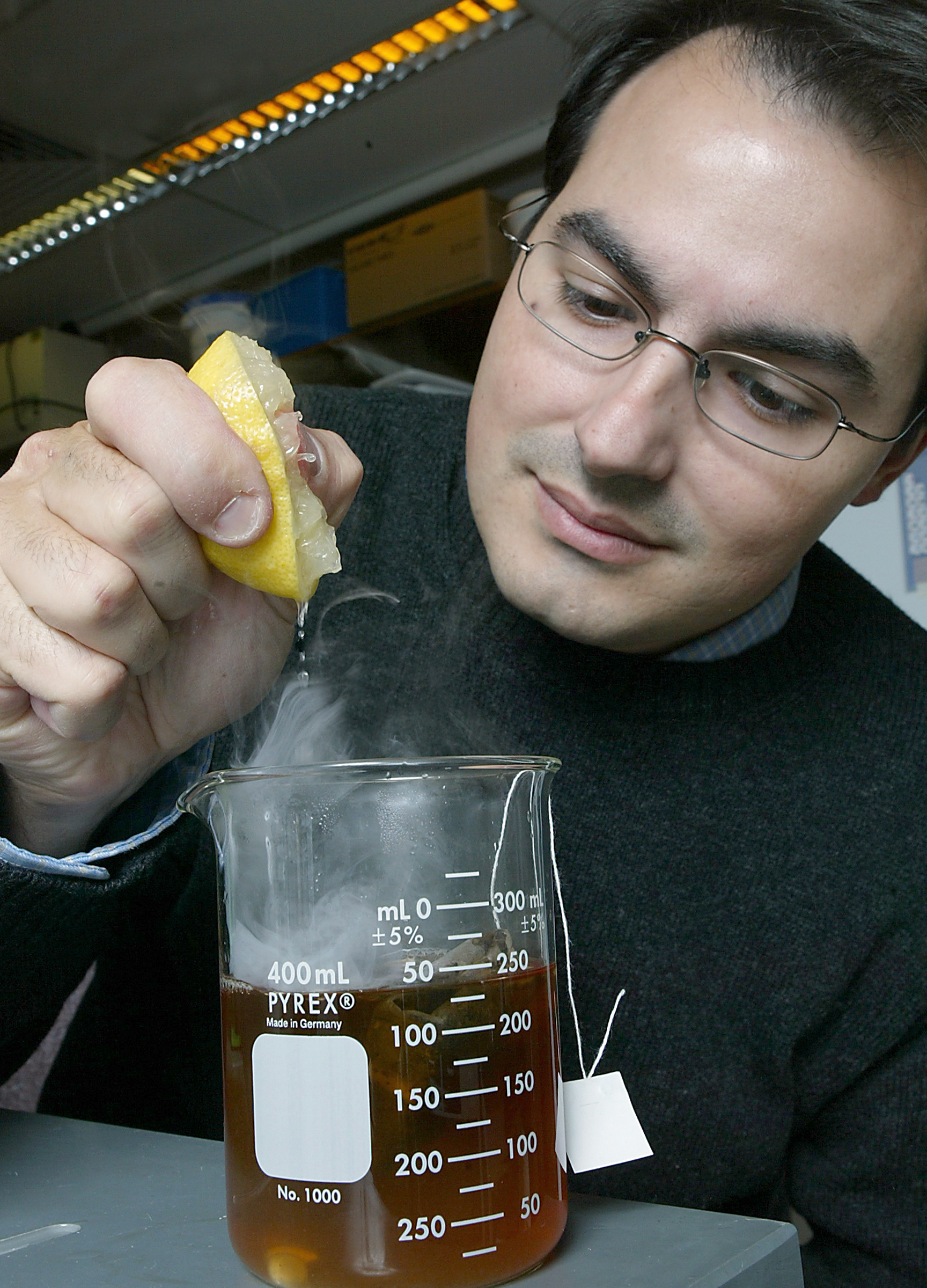 WEST LAFAYETTE, Ind. - An animal study at Purdue University has shown that adding ascorbic acid and sugar to green tea can help the body absorb helpful compounds and also demonstrates the effectiveness of a model that could reduce the number of animals needed for these types of studies.
Mario Ferruzzi, associate professor of food science and nutrition, adapted a digestion model with human intestinal cells to show that adding ascorbic acid to green tea would increase the absorbability of catechins found in the tea. Catechins, a class of polyphenols common in tea, cocoa and grape, are antioxidants thought to fight heart disease, stroke, cancer, diabetes and other health problems.

Ferruzzi, Elsa Janle, a Purdue associate research professor of foods and nutrition, and Catrina Peters, a Purdue graduate student in nutrition, were able to demonstrate that adding ascorbic acid, sucrose or both together increases by as much as three times the amount of catechins that can be absorbed into the bloodstream. The results of the in vivo study compared well with those predicted by the in vitro model.

"This model may be used as a pre-emptive screening tool at very little cost before you do expensive tests on animals or humans," said Ferruzzi, whose findings were published in the early online edition of the journal Food Research International. "If you want to get human screening off the ground, it takes months. If you want to use this model, it takes hours."

The model charts how the digestive stability, solubility and absorption of polyphenols changes based on modifications to a beverage's formula. It will not be exact in terms of measurements, but when compared to the in vivo test in rats, the model's predictions matched directionally to the in vivo study and were relatively close proportionately.

Ferruzzi said testing with the model could allow researchers to predict how a new product formula might change the product's properties, reducing the number of animals needed for testing to only products that showed desired characteristics in the model. The model also can be adapted to simulate the digestive characteristics of other animals or humans as originally intended.

"As long as we know the typical gastrointestinal conditions of an animal and the volumes, we can adapt the model to mimic those conditions," Ferruzzi said. "You don't have to do expensive precursor studies."

The in vivo study backed up the model study that showed adding sugar and vitamin C to green tea enhanced the body's ability to absorb polyphenols. Ferruzzi said that adding lemon juice or other citrus juice to tea would do the trick, or consumers could look for ready-to-drink products that contain 100 percent of the recommended amount of vitamin C or ascorbic acid on the ingredient list.

"Having that vitamin C seems to do it," Ferruzzi said. "And if you don't want to squeeze a lemon into your cup, just have a glass of juice with your green tea."

Connie Weaver, head of the National Institutes of Health Purdue University-University of Alabama at Birmingham Botanical Research Center for Age-Related Diseases, which funded the research, said the study's focus was an important part of understanding how to get the most out of compounds considered beneficial.

"There is a lot of interest in bioactive materials to protect people from disease and promote better health," Weaver said. "What's been totally ignored is the way these materials are found in foods in combination with other ingredients. How they're involved in the food matrix can affect how you absorb these health promoters."

Ferruzzi said the next step in the research is to stage a human clinical trial.

In order to investigate the impact of common food ingredients on catechin absorption, green tea (GT) extract (50 mg) was formulated plain, with sucrose (GT+S), with ascorbic acid (GT+AA) and with sucrose and ascorbic acid (GT+S+AA). Bioavailability and bioaccessibility were assessed in Sprague Dawley rats and an in vitro digestion/Caco-2 cell model respectively. Absorption of epigallocatechin (EGC) and epigallocatechin gallate (EGCG) was significantly (P<0.05) enhanced in GT+S+AA formulations (AUC0-6h= 3237.0 and 181.8 pmol*h/L plasma respectively) relative to GT control (AUC0-6h = 1304.1 and 61.0 pmol*h/L plasma respectively). In vitro digestive recovery was higher for EGC and epicatechin (EC) ( 51-53%) relative to EGCG and epicatechin gallate (ECG) (< 20%) and was modestly enhanced in GT+S and GT+S+AA formulations. Accumulation of EGC, EGCG and ECG by Caco-2 cells was significantly (P<0.05) higher from GT+S+AA compared to other formulations while retention of catechins was enhanced in presence of ascorbic acid. These data suggest that formulation with sucrose and ascorbic acid may improve catechin bioavailability by enhancing bioaccessibility and intestinal uptake from tea.