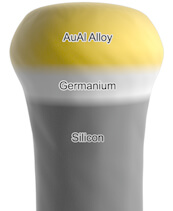 Researchers are closer to using tiny devices called semiconducting nanowires to create a new generation of ultrasmall transistors and more powerful computer chips. The researchers have grown the nanowires with sharply defined layers of silicon and germanium, offering better transistor performance. As depicted in this illustration, tiny particles of a gold-aluminum alloy were alternately heated and cooled inside a vacuum chamber, and then silicon and germanium gases were alternately introduced. As the gold-aluminum bead absorbed the gases, it became "supersaturated" with silicon and germanium, causing them to precipitate and form wires. (Purdue University, Birck Nanotechnology Center/Seyet LLC)

WEST LAFAYETTE, Ind. -  A new generation of ultrasmall transistors and more powerful computer chips using tiny structures called semiconducting nanowires is closer to reality after a key discovery by researchers at IBM, Purdue University and the University of California at Los Angeles.

The researchers have learned how to create nanowires with layers of different materials that are sharply defined at the atomic level, which is a critical requirement for making efficient transistors out of the structures.

"Having sharply defined layers of materials enables you to improve and control the flow of electrons and to switch this flow on and off," said Eric Stach, an associate professor of materials engineering at Purdue.

Electronic devices are often made of "heterostructures," meaning they contain sharply defined layers of different semiconducting materials, such as silicon and germanium. Until now, however, researchers have been unable to produce nanowires with sharply defined silicon and germanium layers. Instead, this transition from one layer to the next has been too gradual for the devices to perform optimally as transistors.

The new findings point to a method for creating nanowire transistors.

Whereas conventional transistors are made on flat, horizontal pieces of silicon, the silicon nanowires are "grown" vertically. Because of this vertical structure, they have a smaller footprint, which could make it possible to fit more transistors on an integrated circuit, or chip, Stach said.

"But first we need to learn how to manufacture nanowires to exacting standards before industry can start using them to produce transistors," he said.

Nanowires might enable engineers to solve a problem threatening to derail the electronics industry. New technologies will be needed for industry to maintain Moore's law, an unofficial rule stating that the number of transistors on a computer chip doubles about every 18 months, resulting in rapid progress in computers and telecommunications. Doubling the number of devices that can fit on a computer chip translates into a similar increase in performance. However, it is becoming increasingly difficult to continue shrinking electronic devices made of conventional silicon-based semiconductors.

"In something like five to, at most, 10 years, silicon transistor dimensions will have been scaled to their limit," Stach said.

Transistors made of nanowires represent one potential way to continue the tradition of Moore's law.

The researchers used an instrument called a transmission electron microscope to observe the nanowire formation. Tiny particles of a gold-aluminum alloy were first heated and melted inside a vacuum chamber, and then silicon gas was introduced into the chamber. As the melted gold-aluminum bead absorbed the silicon, it became "supersaturated" with silicon, causing the silicon to precipitate and form wires. Each growing wire was topped with a liquid bead of gold-aluminum so that the structure resembled a mushroom.

Then, the researchers reduced the temperature inside the chamber enough to cause the gold-aluminum cap to solidify, allowing germanium to be deposited onto the silicon precisely and making it possible to create a heterostructure of silicon and germanium.

The cycle could be repeated, switching the gases from germanium to silicon as desired to make specific types of heterostructures, Stach said.

Having a heterostructure makes it possible to create a germanium "gate" in each transistor, which enables devices to switch on and off.

The work is based at IBM's Thomas J. Watson Research Center and Purdue's Birck Nanotechnology Center in the university's Discovery Park and is funded by the National Science Foundation through the NSF's Electronic and Photonic Materials Program in the Division of Materials Research.

We have formed compositionally abrupt interfaces in Si/Ge and Si/SiGe heterostructure nanowires by using solid AlAu alloy catalyst particles rather than the conventional liquid semiconductor/metal eutectic droplets. We demonstrate single interfaces that are defect-free and close to atomically abrupt, as well as quantum dots, i.e. Ge layers tens of atomic planes thick embedded within Si wires. We show, through real time imaging of growth kinetics, that a low solubility of Si and Ge in the solid particle accounts for the interfacial abruptness, and we discuss the use of solid catalysts to form functional group IV nanowire-based structures for an extended range of electronic applications.