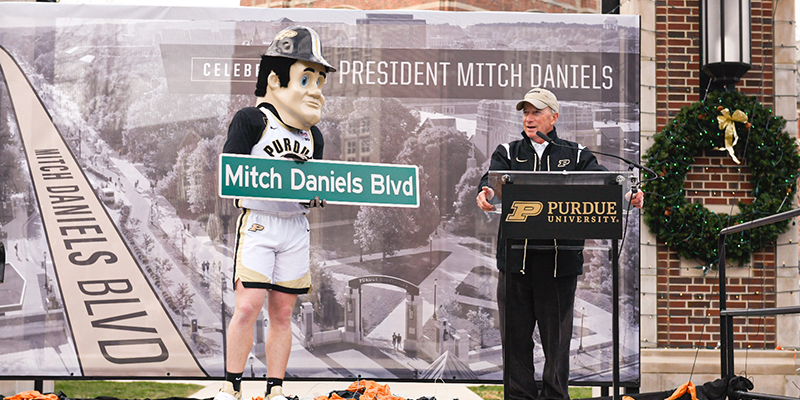 Purdue President Mitch Daniels addresses the gathered crowd as Purdue Pete holds the sign for the new “Mitch Daniels Boulevard.” A streetfest was held in Daniels’ honor as the university community began its MitchFest celebration as his presidency draws to a close. (Purdue University photo/Rebecca McElhoe)

The naming was announced publicly Friday (Dec. 2) by Michael Berghoff, chairman of Purdue’s Board of Trustees, as the university community began its MitchFest celebration with a Mitch StreetFest near Purdue Memorial Union at the corner of Grant Street and what will soon be Mitch Daniels Boulevard. See YouTube video.

Purdue is celebrating MitchFest as Daniels’ final year of presidency draws to a close. Daniels announced in June 2022 that he would step down at the end of December.

“Renaming State Street Mitch Daniels Boulevard acknowledges the role he and (West Lafayette) Mayor (John) Dennis had in reconstructing this road and the way it promoted extensive development on the west end of our campus, including the Continuum, Convergence and Provenance developments, and expansion of Discovery Park District at Purdue, “ Berghoff said.

The State Street Redevelopment Project, which began in June 2016 and was completed in fall 2018, was an innovative, town-gown partnership that transformed State Street from a former state highway into a destination. The project, which stretched from the Wabash River to U.S. 231, enhanced safety for all travelers, simplified traffic patterns and spurred over $700 million in local economic developments — from industry expansion to the west of campus to high-rise apartments east of campus. In 2019, the Institute of Transportation Engineers, an international professional organization, named the project as the winner of the 2019 Complete Streets Council Best Project Award.

In addition to the street renaming, Berghoff and Trustees approved an emeritus package for Daniels, who will become Purdue President Emeritus as of Jan. 1, 2023. Trustees also approved a resolution of appreciation for Daniels’ decade of successful leadership and service to Purdue.

Mitch Daniels Boulevard will run from Grant Street west through Purdue’s West Lafayette campus, culminating at U.S. 231. Purdue Research Foundation, on behalf of Purdue Trustees, made the renaming request to the Area Planning Commission, which cleared the way for approval on Friday by the West Lafayette Board of Works. Signage will be installed in the spring semester.