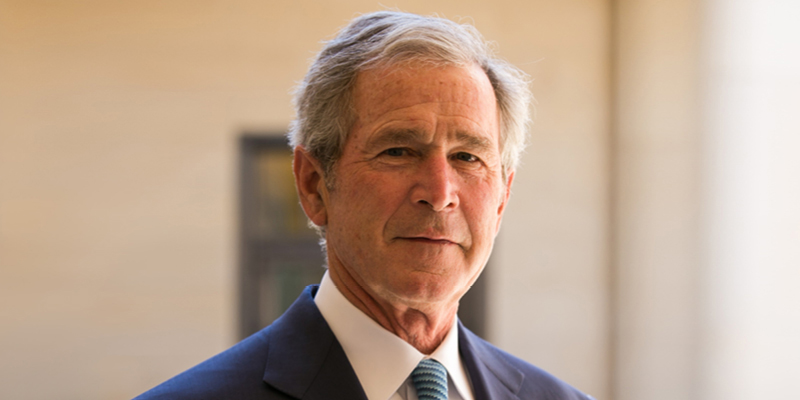 Leadership and citizenship at heart of Dec. 6 conversation with 43rd US president

“A Conversation with George W. Bush,” scheduled for 6 p.m. Tuesday, Dec. 6, in Elliott Hall of Music, will feature a discussion of leadership in challenging times and the responsibilities of an informed citizenship.

“We’ve made efforts during these past 10 years to continually enrich the level and quality of intellectual conversations here at Purdue, and we are grateful to the nearly 40 Presidential Lecture Series guests of many viewpoints and perspectives who have joined us,” Daniels said. “It would be hard to top the honor of ending this series with the former president of the United States.”

Reserved-seating tickets for entry will be required, becoming available beginning at 10 a.m. Nov. 7 at www.purdue.edu/president/lecture-series/. Individuals will be limited to two tickets each. There is no charge for the event. Tickets will be electronic only and are not transferable. Attendees should plan to bring a photo ID and their mobile ticket for entry. Due to anticipated audience size, guests should arrive early to navigate event parking and entry procedures prior to the lecture.

As the Bush administration’s first director of the Office of Management and Budget, Daniels was dubbed by Bush “The Blade” for his adherence to spending restraint. Upon Daniels’ departure in May 2003, Bush praised him as “a really good watchdog of the taxpayers’ money.” For his Indiana gubernatorial campaign, Daniels used the trademark slogan “My Man Mitch,” in reference to another nickname President Bush gave him while serving in his administration.

Bush served as the 43rd U.S. president from 2001-09. As commander in chief, President Bush worked to expand freedom, opportunity and security at home and abroad. At home, he championed the No Child Left Behind Act to raise standards in schools and cut taxes for every federal income taxpayer, restoring economic growth after the 2000-01 recession and launching an unprecedented 52 straight months of job creation.

Daniels’ baptism in public service came as chief of staff to U.S. Sen. Richard Lugar from 1977-82, before serving as a senior advisor to President Ronald Reagan. After a 15-year career in private business, Daniels was confirmed as President Bush’s director of the Office of Management and Budget by a U.S. Senate vote of 100-0, serving from January 2001 until May 2003. In this role, Daniels also was a member of the National Security Council and the Homeland Security Council.

Daniels left the White House in mid-2003 to launch his successful campaign for Indiana governor, serving two terms. On his first day as governor, Daniels created Indiana’s first Office of Management and Budget.

About the Sears Lecture Series

The Sears Lecture Series was established by Louis Martin Sears. He established the series to present public lectures free of charge. Sears was a faculty member in the then-joint Department of History and Political Science from 1920 until his retirement in 1956. Sears specialized in diplomatic history and biography and was the author of numerous books. The College of Liberal Arts presents the series bearing his name.