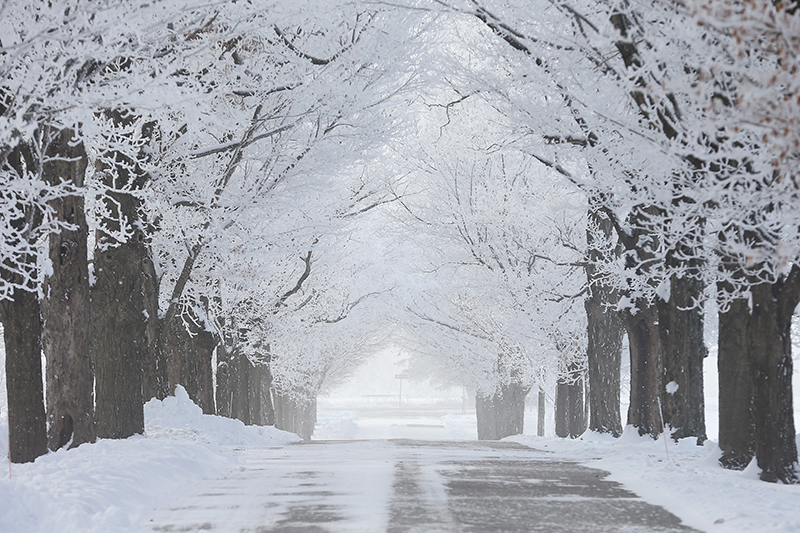 The first measurable snowfall in West Lafayette, home to Purdue University, happens, on average, on Dec. 3. But it has happened as early as Oct. 19 and as late as Jan. 11. (Purdue University photo/Tom Campbell)

Toolbox users can ask questions such as, “What’s our snowiest month?” “What’s the earliest snowfall we’ve ever had on record?” “How many times a year do we get a 2-inch or 4-inch snow?” “How much snow do we get for the whole season?” Or, “How much should we get in a single month?”

“You can answer these questions quickly and easily with this toolbox, which has been in the making for more than a year,” said MRCC director Beth Hall. “We tested the toolbox with some of our National Weather Service and state climate partners. Then we improved and updated it with new visualizations and software that provide a streamlined site for accessing this snowfall data in an appealing way."

Potential toolbox users include National Weather Service forecasters and TV meteorologists who seek to put current conditions into historical perspective. City planners may wish to consult the toolbox to assess the timing of snow removal assets they’ll need to keep their streets clear. And outdoor recreational enthusiasts can find out how much snow to expect based on past records.

“We update this once a year to reflect the last snow season, all the way back as far as the records go,” said MRCC associate director Melissa Widhalm.

The toolbox also contains climate “normal” statistics for the most recent 30-year period with updates every decade. The current climate “normals” period spans 1991 to 2020, replacing the previous period of 1981 to 2010. The annual snowfall year runs from July to June because the typical snowfall season falls in two calendar years.

“We apply stringent missing-data filters to make sure we’re getting the best available information,” Widhalm said. “Snowfall is hard to measure.”

Sometimes observers skip making measurements at their stations because of bad weather.

“We combed through all of this data to make sure that these are high-quality, long-term data stations. When you look at an average or a record, you can feel confident that it’s capturing reality, that it didn’t miss a major event,” she said.

Some users might remember times when it snowed at a certain location but can’t find any measurements at the nearest station.

“It might not have snowed at that exact station. It could have snowed two miles down the road. That’s the nature of precipitation measurements,” Widhalm said. On the weekend of Nov. 12 and 13 this year, for example, people in downtown West Lafayette, Indiana, observed an inch or more of snowfall while residents in the northwest part of the county saw nary a flurry.

The snow data in the toolbox is based on individual stations where measurements were made by hand every time it snowed. Many of the stations are part of the ThreadEx network, which, in a statistically consistent way, extends the record of weather stations that may have moved around a bit, like the one in Indianapolis.

“This thread of data for Indianapolis goes all the way back to 1883,” Widhalm said.

MRCC’s climatologists have ongoing plans for the toolbox.

“We’re going to have several other snow statistics on version two. This is our first pass,” Widhalm said. “We prioritized some of our most commonly requested datasets. Then we are going to push out another update either later this winter or next snow season.”

The MRCC covers a nine-state area, but when the center moved from Illinois to Purdue last year, some of the snowfall maps had yet to be updated with the new climate-normal data. Widhalm decided to update the snowfall data for the entire U.S. and offer all of it as part of the toolbox.

In October the MRCC added an online interactive Freeze Date Tool for specialty crop growers in 25 states to its array of resources. The MRCC and its project partner, the USDA Midwest Climate Hub, included states outside of their coverage area at the request of climatologists working in those regions.

The Freeze Date Tool is especially relevant twice a year when the weather changes from warm to cold and from cold to warm.

“This snow toolbox is applicable throughout the entire snow season, from October or November all the way to March or April,” Widhalm said. “There’s relevant information month after month or for the season as a whole.”