The sands of Mars are green as well as red, rover Perseverance discovers 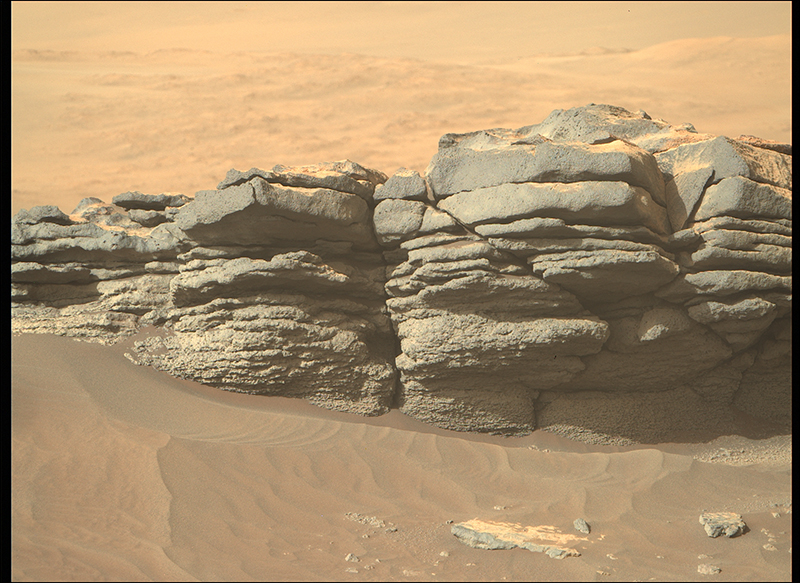 Mars rover Perseverance helped scientists study layered rocks like these in Jezero Crater on the Martian surface. Scientists initially thought they were sedimentary rocks, but further examination showed them to be igneous rocks – solidified lava. These rocks show evidence of interaction with water, but on a limited basis. They date back nearly 4 billion years, giving scientists a window into what conditions on the early planets were like. (Image/NASA/JPL-Caltech/ASU)

WEST LAFAYETTE, Ind. — The accepted view of Mars is red rocks and craters as far as the eye can see. That’s much what scientists expected when they landed the rover Perseverance in the Jezero Crater, a spot chosen partly for the crater’s history as a lake and as part of a rich river system, back when Mars had liquid water, air and a magnetic field.

What the rover found once on the ground was startling: Rather than the expected sedimentary rocks – washed in by rivers and accumulated on the lake bottom – many of the rocks are volcanic in nature. Specifically, they are composed of large grains of olivine, the muddier less-gemlike version of peridot that tints so many of Hawaii’s beaches dark green. 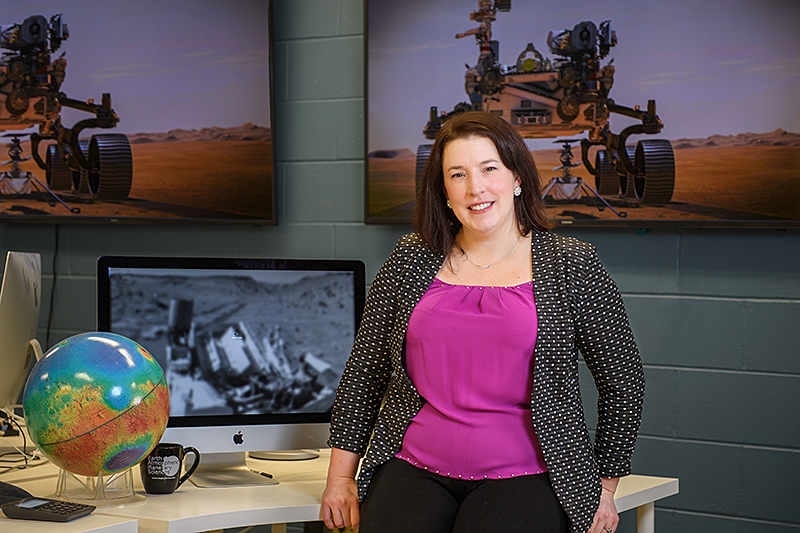 Wiens led the design and construction of Perseverance’s SuperCam, which helps analyze the rock samples and determine their type and origin. Horgan helped select Jezero Crater as the rover’s landing site and now uses the Mastcam-Z cameras on Perseverance to put its discoveries into geological context.

The rocks and lava the rover is examining on Mars are nearly 4 billion years old. Rocks that old exist on Earth but are incredibly weathered and beaten, thanks to Earth’s active tectonic plates as well as the weathering effects of billions of years of wind, water and life. On Mars, these rocks are pristine and much easier to analyze and study.

Understanding the rocks on Mars, their evolution and history, and what they reveal about the history of planetary conditions on Mars helps researchers understand how life may have arisen on Mars and how that compares with early life and conditions on ancient Earth. 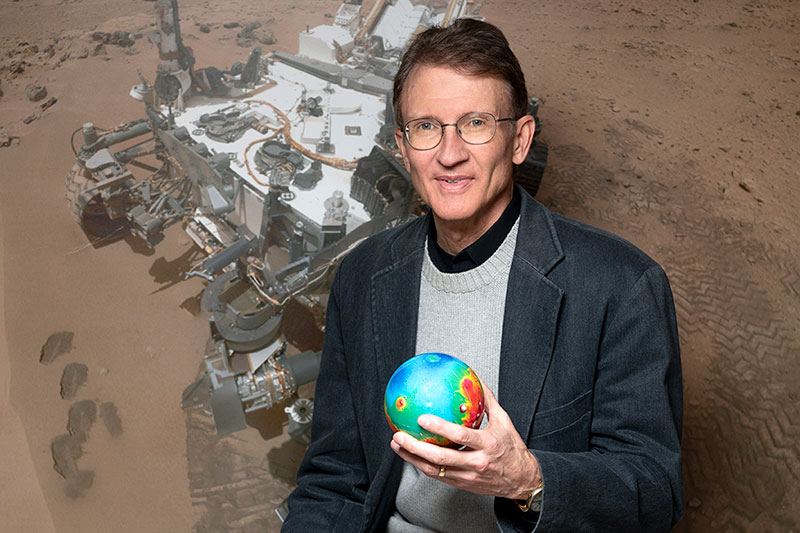 Roger Wiens, Purdue University associate professor of planetary science and Mars rover expert at Purdue University with a topographical model of Mars and a photo of the rover Curiosity. He is the principal investigator on Perseverance’s SuperCam team and Curiosity’s ChemCam team. (Credit: Purdue University photo/John Underwood) Download image

“One of the reasons we don’t have a great understanding of where and when life first evolved on Earth is because those rocks are mostly gone, so it’s really hard to reconstruct what ancient environments on Earth were like,” Horgan said. “The rocks Perseverance is roving over in Jezero have more or less just been sitting at the surface for billions of years, waiting for us to come look at them. That’s one of the reasons that Mars is an important laboratory for understanding the early solar system.”

Scientists can use conditions on early Mars to help extrapolate the environment and conditions on Earth at the same time when life was beginning to arise. Understanding how, and under what conditions, life began will help scientists know where to look for it on other planets and moons, as well as lead to a deeper understanding of biological processes here on Earth.

The search for life is one of Perseverance’s main goals and one of the reasons it landed in Jezero Crater in the first place. Discovering the potential for habitable environments in something as uninhabitable as Jezero Crater’s aged lava flows raises hopes for what lies in the sedimentary rocks the mission is examining now.

“We’re excited to see even better results about organics and ancient habitable environments,” Horgan said. “I think it’s really setting the stage that Mars is this watery, habitable place, and all the samples we’re getting back are going to help us understand the history of ancient microbial life on Mars.”

The equipment and innovative instruments are helping the rover carry out its mission in a way no other rover yet has, emphasizing the need to land on the planet so scientists can examine and understand what’s really going on.

“From orbit, we looked at these rocks and said, ‘Oh, they have beautiful layers!’ So we thought they were sedimentary rocks,” Horgan said. “And it wasn’t until we were very close up and looked at them, at the millimeter scale, that we understood that these are not sedimentary rocks. They’re actually ancient lava. It was a huge moment when we figured that out on the ground, and it really illustrated why we need this kind of exploration. The tools we have on the rover are vital because it was impossible to understand the origin of these rocks until we got up close and used all our amazing microscopic instruments to look at them.”

More than 40 co-authors were listed in the suite of papers from national and international facilities, including NASA’s Jet Propulsion Lab and the Los Alamos National Laboratory.

Horgan, Wiens and their collaborators at Purdue will continue to analyze and guide Perseverance’s discoveries and insights into Mars’ history, just as Purdue scientists continue to help analyze rocks from the Apollo moon missions that put both the first and last humans on the moon.

An olivine cumulate outcrop on the floor of Jezero crater, Mars
Science
10.1126/science.abo2756
The abstract and author list are available online.


Note to journalists: A video of Dr. Wiens discussing the Perseverance’s rover rock findings is available to AP members on the AP Video Hub.