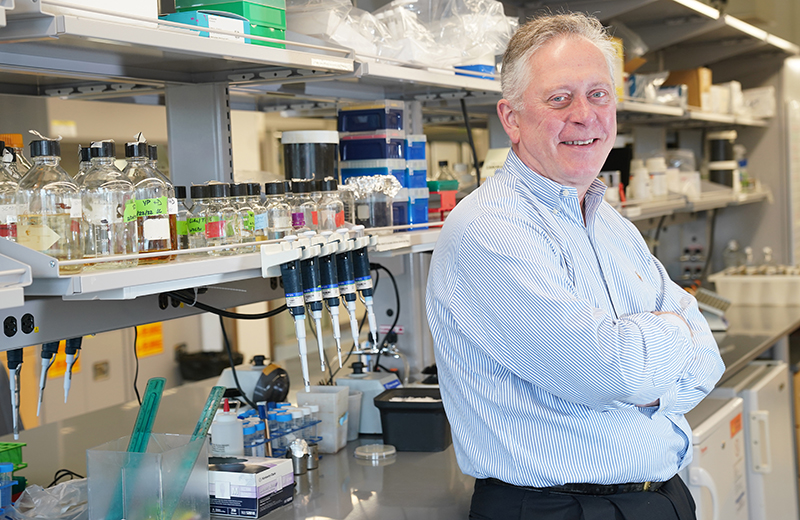 WEST LAFAYETTE, Ind. — Clint Chapple, distinguished professor in the Purdue University College of Agriculture’s Department of Biochemistry, has been elected to the National Academy of Sciences. NAS membership recognizes achievement in original research and is widely regarded as one of the highest honors in science and technology.

Chapple will be among approximately 2,400 active U.S. NAS members. Academy members elect a maximum of 120 U.S. researchers and 30 international members annually for outstanding professional achievement and commitment to service.

“Election into the NAS is an outstanding honor for scientists, and Clint is most deserving,” said Karen Plaut, the Glenn W. Sample Dean, College of Agriculture. “He is a top-notch scholar who has received awards for research, teaching and mentoring students. We are elated he has been recognized for his contributions to his field, and we are proud to have him as part of our faculty.”

Andrew Mesecar, head of the Department of Biochemistry, said, “He was elected to the National Academy because of his forefront contributions to his field. He is world renowned for that and for his service to the plant sciences community. This is what the world sees. What the world doesn’t see is an exceptional leader who is willing to sacrifice for the greater good of the department.”

The NAS specifically noted Chapple’s work in understanding the biosynthesis of lignin, the hardening component in plant cell walls that serves various important biological functions. In Chapple’s nearly 30 years at Purdue, his study of lignin has expanded along with its applicability to pulp and paper production, animal feedstocks and biofuels.

“The plant cell wall is a fundamental part of the plant body,” Chapple explained. “Starting in 1993, my group was able to learn about the fundamentals of what enzymes and genes are important for plants to make lignin in the cell wall. We were able to manipulate their expression and learned to ‘reprogram’ the plant to make a lignin that might be more suitable for a variety of applications. Overall, we learned a lot in the process.”

Plaut noted that Chapple also has been instrumental in advancing plant sciences initiatives that have strengthened research and teaching in the College of Agriculture. Chapple co-founded and directed the Center for Plant Biology, which hired 10 new assistant professors to work across multiple disciplines within the center, funded as part of the Institute of Plant Sciences.

Investment in plant sciences through Purdue Moves and its successor, Purdue’s Next Moves, has helped sustain an environment in which Chapple’s research has flourished. He credits his former and current graduate students and postdocs for their contributions:

“I’ve had great people in my lab, many of whom are in industry or faculty members at other universities,” he said.

“If you can move the needle in terms of human knowledge — and get paid for it and have fun! — that’s a great opportunity,” he said. “I’ve been very fortunate.”