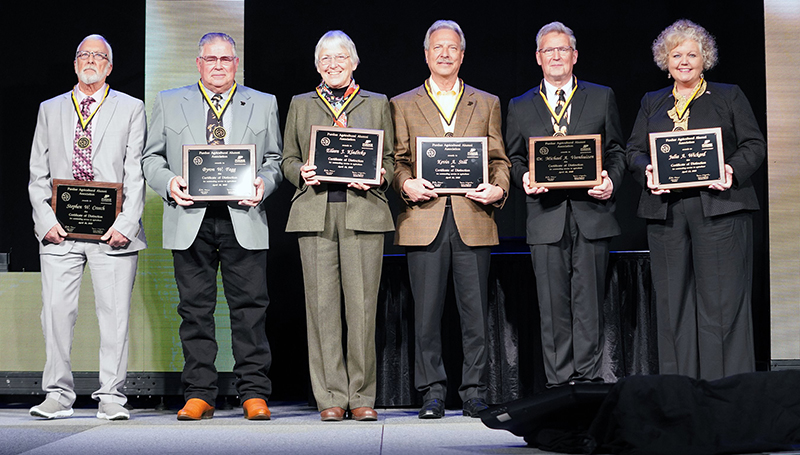 WEST LAFAYETTE, Ind. — Eight leaders from across the fields of agriculture were recognized with the Purdue Agricultural Alumni Association’s highest honor – the Certificate of Distinction –during the Ag Alumni Fish Fry in April.

The Certificate of Distinction is presented annually to professionals who have contributed to agriculture, forestry or natural resources through career accomplishments, organizational involvement, community service and other activities.

The following individuals were honored this year.

Stephen W. Creech, Bloomington, Indiana, earned a bachelor’s degree in forestry and natural resources in 1974 from Purdue. A year later, he was a district forester with the Indiana Department of Natural Resources and a volunteer firefighter in Greencastle. Part of an Indiana wildland fire crew since 1977, he’s been mobilized nationally to 14 states since 1987 and has responded to hurricanes, floods and 9/11.

Creech has served on a Type 1 national incident management team since 1996, was Indiana’s fire coordinator from 1978 to 2003, and is a two-time recipient of the Northeast Forest Fire Supervisors award. Creech was a primary force in establishing the Big Rivers Forest Fire Management Compact (Indiana, Illinois, Iowa, Missouri, U.S. Forest Service), and is the current grants administrator. Working with the U.S. Department of Agriculture, Forest Service, and Indiana University, he helped initiate a geographic information system analysis of the wildland-urban interface fire problem in 20 northeastern states.

Byron Fagg, Salem, Indiana, has been Purdue Extension director and ANR educator in Washington County for 22 years. Fagg was instrumental in getting many programs started, with the Indiana Beef Evaluation Program, Bull Test Station, being a good example.

In 1983, Fagg started an annual breeding soundness evaluation (BSE) clinic in Washington County and then in six other counties. He determined that each bull identified as unable to breed cows cost the producer $10,000. Washington County producers have avoided more than $1 million in potential losses by identifying these bulls.

“Each day I strive to be like Bryon,” said Danielle Howell-Walker, a Purdue Extension Washington County educator, said. “To build relationships with farmers, to be a positive leader, to respond quickly and accurately with information for those who need Extension assistance, to provide practical and applicable information during education programs and to promote agriculture and our county in the best light possible.

Jules Janick, West Lafayette, Indiana, came to Purdue in 1951. He has contributed iconographic studies on Dioscorides, the Drake Manuscript, the Unicorn Tapestries, Caravaggio, Cotan, and the Raphael frescoes in the Villa Farnesina in Rome. He has written on the inter-relationship of horticulture and scholarship, art, ethics and the contributions of horticulture to human welfare. More recently, he has contributed to unraveling the Voynich codex.

His scholarly work in plants led to the release of 23 varieties of disease-resistant apples. He has authored, co-authored or edited 142 volumes of books, journals or proceedings, 63 book chapters and 222 refereed journal articles. His seminal text, Horticultural Science, first published in 1964, is translated into Portuguese, Spanish, Arabic and Hindi. Janick taught online for more than a decade, and two courses — History of Horticulture, and Tropical Horticulture — were taken by at least 6,000 students.

Max Judge, Lexington, Virginia, earned two degrees from Purdue and was a full professor at the university for 27 years. He developed and taught the first meat science course offered at Purdue. Thousands of Boilermakers have taken the course and others he developed. In 1974, he co-authored “Principles of Meat Science,” which, after updates, still is one of the most-used undergraduate meat science textbooks.

Judge’s research led to improved meat quality with reduced fat content in pork. He published the first report in the United States indicating a definite effect of growing environment on swine meat quality. Judge demonstrated technology to measure swine carcass lean content on the production line in pork harvest plants. The Lean Team, funded by the USDA and the Indiana Pork Producers Association, received the USDA’s Distinguished Service Award for Scientific Research in 1992. The American Meat Science Association’s highest honor, the R.C. Pollock Award, is another on a long list of national and international salutes.

Eileen Kladivko, West Lafayette, Indiana, the 2020-21 recipient of Purdue’s prestigious Corinne Alexander Spirit of the Land-Grant Mission Award, is “a generous scientist, still curious about new insights and applications,” said Jennifer Tank, a professor at the University of Notre Dame.

In 1982, Kladivko became the first female faculty member in Purdue’s Department of Agronomy.

Kladivko helped lead two significant changes in agriculture: the use of cover crops as a technique to reduce farm field nutrient losses and soil erosion, and the use of soil health to improve the understanding of soil systems management. Kladivko was instrumental in starting, funding and leading the Midwest Cover Crop Council and the Conservation Cropping Systems Initiative. More than 90,000 copies of the Cover Crop Pocket Guide that she authored are in circulation.

Kevin Still, Avon, Indiana, is the former general manager of Pulaski County Co-op. He was president and chief executive of Midland Co-op from 1989 to 2002 and engineered a series of mergers and consolidations that created Co-Alliance, which Still has led since 2002.

A billion-dollar corporation and one of the nation’s larger farmer-owned input supply cooperatives, Co-Alliance is based in Avon and has more than 1,000 employees and 80-plus locations in Indiana, Illinois, Michigan and Ohio. It deals in energy, agronomy, grain marketing and swine/animal nutrition.

“Early on, Kevin realized that farmer-owned cooperatives were going to need to adapt and grow if they were to remain competitive in a rapidly changing agricultural business environment,” Purdue Provost Jay Akridge said. “Change was essential if these farmer-owned businesses were to continue to provide the benefits to farmers that they had made possible for decades.

Malcom DeKryger, president and CEO of Belstra Milling Co. and Belstra Group Farms and a trustee of Purdue, said that in the more than two decades he has worked with Veenhuizen, his integrity about doing the right thing is one of the greatest compliments he could give.

“A livestock producer is faced with many challenges on an annual/seasonal/daily basis. Mike’s understanding of the crossroads between design, construction, operation and compliance prevented many problems and raised the professionalism of Indiana’s producers,” DeKryger said. “We always knew that if anyone questioned our design by Mike that he would stand alongside and defend our dreams with intelligence and integrity.

Julia Wickard, Greenfield, Indiana, is the current Indiana state executive director of the USDA Farm Service Agency. This is Wickard’s second time filling this role, as she previously held the position from 2009-17, administering credit, disaster and safety net farm programs for agricultural producers and overseeing more than 345 employees in 75 field offices.

In 2017, Wickard was the assistant commissioner at the Office of Program Support in the Indiana Department of Environmental Management. She was also the agricultural liaison. Wickard worked for U.S. and Indiana departments of agriculture, the Indiana Beef Cattle Association, and Indiana Farm Bureau Inc.