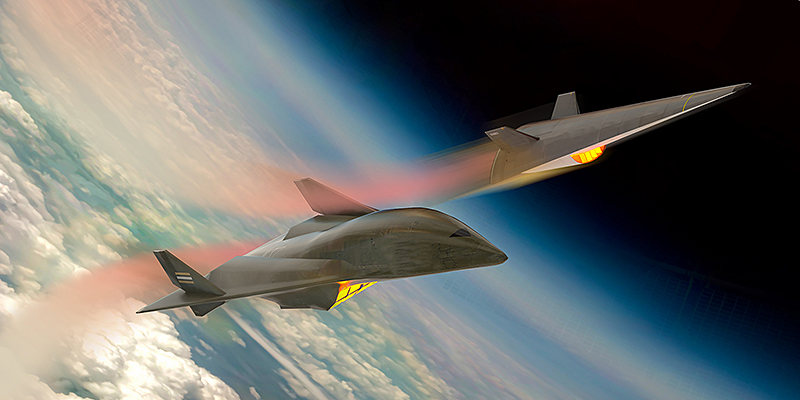 WEST LAFAYETTE, Ind. – A first-of-its-kind in the U.S. facility to test hypersonic technologies will be constructed in the Purdue Aerospace District adjacent to the Purdue University campus, already a hotbed for hypersonics research and aerospace technology developments.

The Hypersonic Ground Test Center, or HGTC, announced Monday (Aug. 9) during a two-day Hypersonics Summit hosted by Purdue and the National Defense Industrial Association, will be a central shared utility that supports multiple test cells and laboratories.

The announcement of the HGTC comes on the heels of two major recent announcements for plans in the Purdue Aerospace District. On July 27, the university and research foundation announced plans for the construction of the 65,000-square-foot Hypersonics and Applied Research Facility. That facility will house the only Mach 8 quiet wind tunnel in the world as well as a hypersonic pulse (HYPULSE) shock tunnel. On Aug. 2, it was announced that Rolls-Royce will significantly expand its already large footprint at Purdue. Its new test facilities will be used to develop high-altitude and hybrid-electric engines to power the next generation of U.S. military aircraft.

“At Purdue, we’re committed to research at the very frontiers of science, especially when it can contribute to the national security of Americans,” Purdue President Mitch Daniels said. “Becoming home to the nation’s premier hypersonics facilities can make such a contribution, while providing enormous new opportunities for our researchers, aspiring entrepreneurs, and job seeking graduates.”

Mark J. Lewis, executive director of the Emerging Technology Institute, a nonpartisan think tank focused on technology critical to the future of national defense, and the chief scientific advisor to NineTwelve, said, “We need to do more than match our peer competitors, we need to leapfrog them quickly. This facility will help us make that happen.”

The HGTC will be administered by a new nonprofit consortium of national defense industry partners that will manage capital and operational costs. Rolls-Royce North America is the first aerospace industry member of the HGTC consortium. Other national industry partners and potential interested government entities are being recruited.

The HGTC facility will house two separate testing streams; partners can conduct tests in the 3.5-5.0 Mach range or the 4.5-7.5 Mach range. Multiple companies can undertake work simultaneously on site, while being ensured full protection of intellectual property and sensitive work. These facilities will be available for long-term lease to allow guaranteed, timely access for contractors to conduct tests at their preferred schedule and duration.

Tom Bell, chairman and CEO, Rolls-Royce North America, said, “Rolls-Royce is proud to be the founding member of this significant new addition to aerospace research. We credit leadership from the state of Indiana, Purdue University and Purdue Research Foundation for their important vision and investment leading to the creation of the Hypersonics Ground Test Center.  Rolls-Royce has a unique history in high-speed propulsion, dating to the Concorde aircraft and 30 years of experience on hypersonics research with our Department of Defense customers through our LibertyWorks advanced technology unit in Indianapolis. We are keenly interested in the area of hypersonic propulsion and currently exploring development of advanced supersonic and high-Mach propulsion systems with our customers.”

Indiana Gov. Eric Holcomb said the HGTC is another example of how the state of Indiana and industry succeed together.

"Creating this first-in-the-nation center is possible because we have industry partners that aren't just on the cutting edge but are reinventing where the edge is,” Holcomb said. “Couple that with the many thriving communities in Tippecanoe County, and a gushing pipeline of top talent at Purdue including researchers, students and graduates prepared to make the next giant leaps in both aerospace and hypersonic innovation. It's because of days like today that our economy remains strong and Indiana reigns as one of the best places in the world to do business."

U.S. Sen. Todd Young of Indiana, said, “The transformational technologies being developed and tested at Purdue will help America win the 21st century. Not only will these ideas create the jobs of tomorrow, they will ensure that the American military remains the strongest and most advanced fighting force in the world.”

Purdue University and Purdue Research Foundation will fund the construction of the HGTC.

PRF president and CEO Brian Edelman said, "Building the Hypersonic Ground Test Center would not be possible without a recent multimillion-dollar investment to further expand facilities in the Purdue Aerospace District. That investment from Rolls-Royce, the university and PRF, along with support from the state, West Lafayette, Lafayette and Tippecanoe County, laid the foundation for creating the HGTC."

The HGTC draft design, capabilities and requirements were developed by Zionsville, Indiana-based NineTwelve, in coordination with PRF. Chad Pittman, president of NineTwelve, said he and the NineTwelve team are excited to be a valuable resource for the facility and the partnerships it has and will continue to attract in the vital space of the nation’s defense needs.