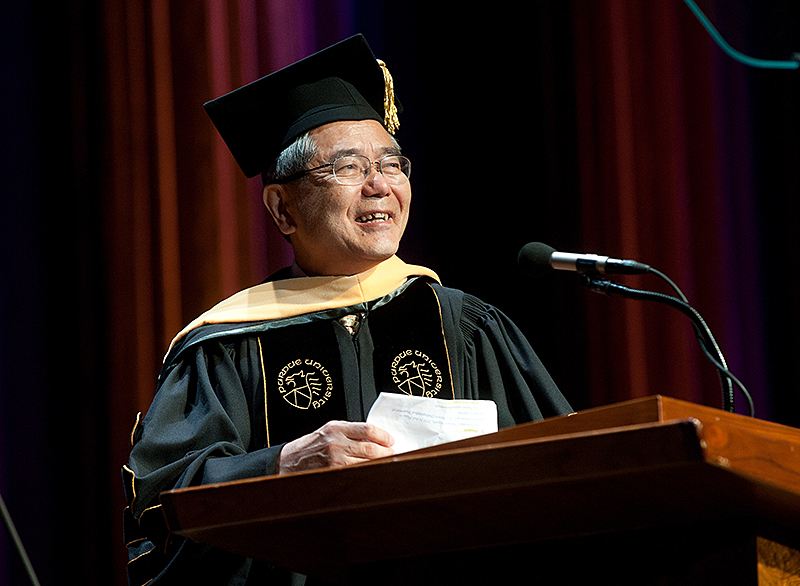 WEST LAFAYETTE, Ind. — Purdue University chemist Ei-ichi Negishi, whose work in creating a method to build complex organic molecules necessary for numerous purposes — from pharmaceutical manufacturing to electronics — led to a Nobel Prize in Chemistry, died Sunday (June 6) in Indianapolis. He was 85.

In October 2010, Negishi became Purdue’s second Nobel winner. Herbert C. Brown was the first in 1979. Negishi had studied under Brown and, appropriately, was the Herbert C. Brown Distinguished Professor of Chemistry when he won the Nobel honor.

Negishi received his Ph.D. from Penn in 1963 and immediately moved to Purdue to work as a postdoctoral researcher under Brown. He stayed until 1972, when he went to Syracuse University as an assistant and then associate professor. He returned to Purdue in 1979. Twenty years later, he was named the Herbert C. Brown Distinguished Professor of Chemistry.  He retired in 2019.

“The world lost a great and gracious man — one who made a difference in lives as a scientist and a human being,” Purdue President Mitch Daniels said. “We’re saddened by Dr. Negishi’s passing but grateful for his world-changing discoveries and the lives he touched and influenced as a Purdue professor.” 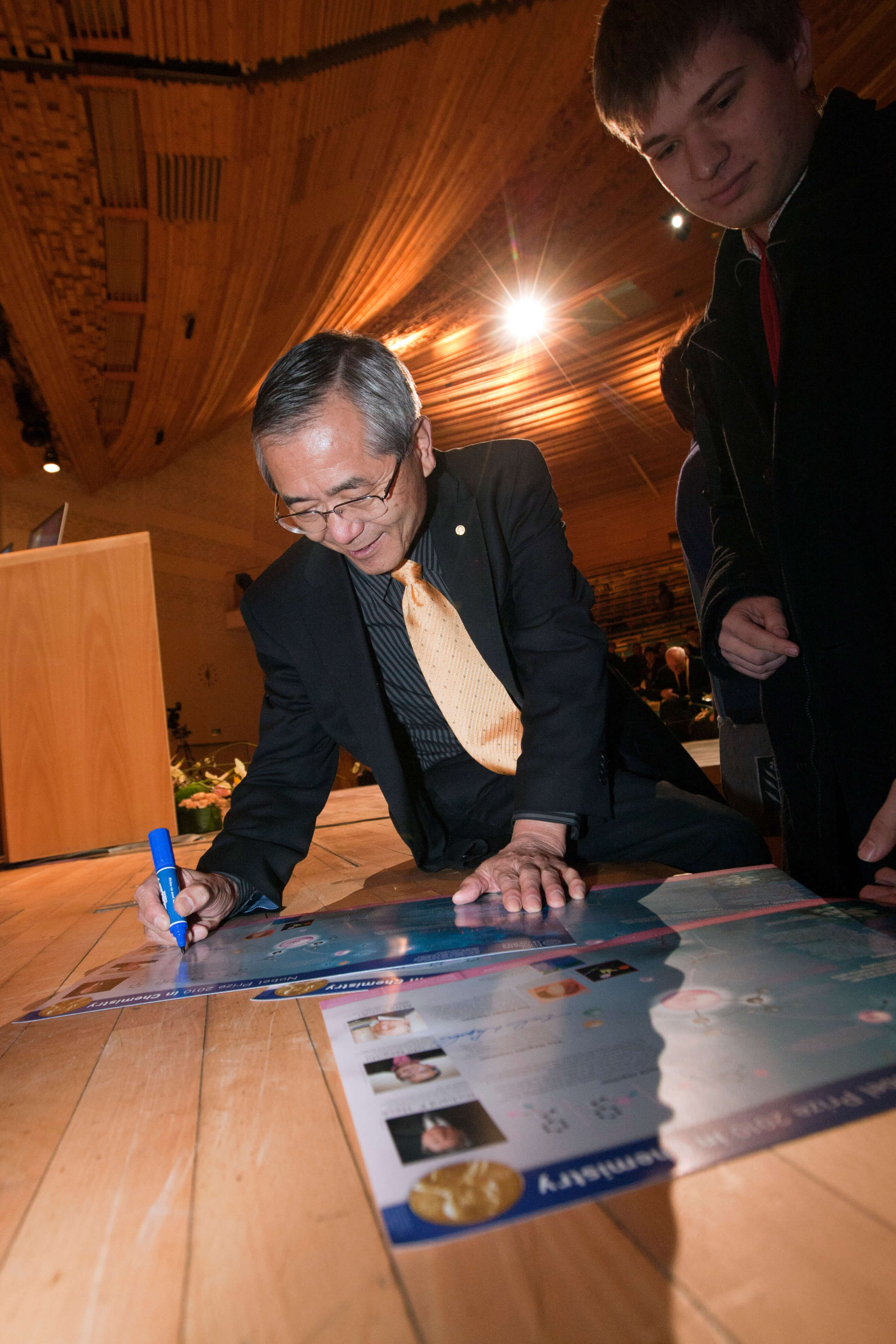 Negishi shared the Nobel with Richard Heck of the University of Delaware and Akira Suzuki of Hokkaido University in Japan. Suzuki was also a protégé of Brown.

The three had discovered new ways to bond together carbon atoms. They developed metal-based reactions, called palladium-catalyzed cross-coupling, that allow for easy and efficient synthesis of complex organic compounds.

Their work has wide use in medicines, agriculture and electronics. Examples of applications include pharmaceutical antibiotics that work on drug-resistant bacteria, fluorescent marking essential for DNA sequencing, agricultural chemicals that protect crops from fungi and materials for thin LED displays.

Negishi likened the innovation to playing with a LEGO game, altering the building blocks of molecules and using transition metals as catalysts to promote the reactions needed for the synthesis.

"We found catalysts and created reactions that allow complex organic compounds to, in effect, snap together with other compounds to more economically and efficiently build desired materials," he said. "LEGOs can be combined to make things of any shape, size and color, and our reactions make this a possibility for organic compounds."

The discovery also helped dramatically reduce costs, allowing researchers to recycle the expensive metals, such as palladium, used in the synthesis.

"These transition metals are very expensive, but when they can be used millions to billions of times, it dramatically reduces the cost and makes the mass manufacturing of special, complex materials practical," Negishi said.

Negishi was 75 when he learned he had won the Nobel. It was 5 o’clock in the morning on Oct. 6.  Video of Negishi’s career is available here and here. 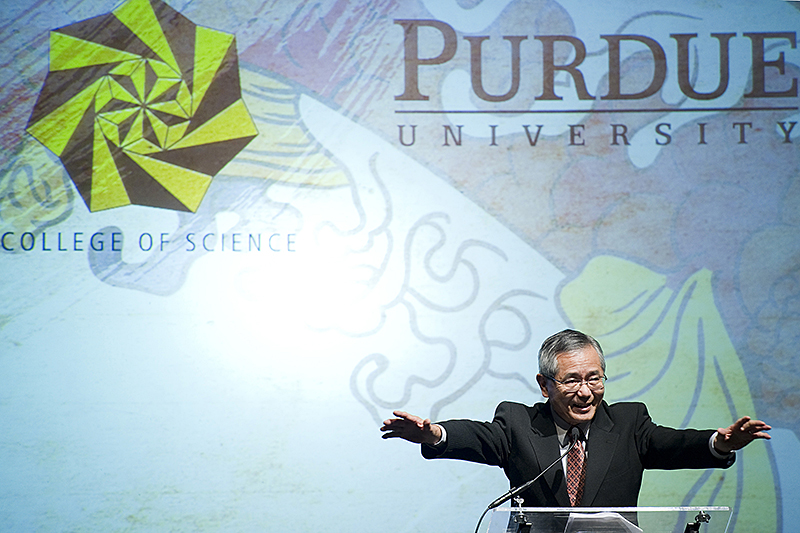 "It was the greatest honor of his career, the culmination of a lifetime of work," John Norberg wrote in his book of Purdue history, Ever True, 150 Years of Giant Leaps. "But just a few hours after receiving the telephone call from Stockholm, Sweden, Negishi would excuse himself from an international news conference to walk across campus and teach a sophomore-level chemistry class."

Said Patrick J. Wolfe, dean of Purdue’s College of Science: “That really tells you all you need to know about Dr. Negishi. On the very day he wins the Nobel, he’s in class with his students. He was extremely approachable and passionate about not only those he served, but served with. His legacy is so much more than his Nobel … it’s the inspiration he provided on a daily basis.”

On Purdue’s campus today, a bronze bust of Negishi beside that of his mentor Brown is on permanent display in Wetherill Laboratory of Chemistry. Negishi’s bust was dedicated in April 2014. The entrance and foyer in the STEM teaching lab facility is called the Dr. Ei-Ichi Negishi Atrium in his honor. Purdue trustees approved the naming in October 2019.

Negishi's other awards included a Guggenheim Fellowship, the A. R. Day Award, a Chemical Society of Japan Award, an American Chemical Society Organometallic Chemistry Award and a Humboldt Senior Researcher Award.  He was elected to the American Academy of Arts and Sciences in 2011 and the National Academy of Sciences in 2014.  Negishi authored more than 400 publications, including two books. Collectively, these publications have been cited more than 20,000 times.

His family is not planning a funeral service in the United States and will lay him to rest in Japan sometime next year.