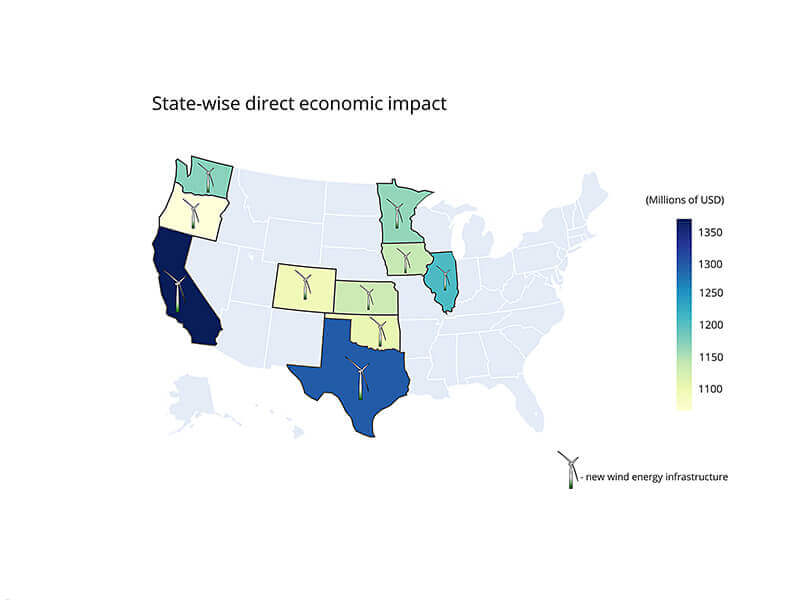 WEST LAFAYETTE, Ind. — Wind, which generates less greenhouse gas emission than burning fossil fuels, is making up an increasing share of the energy production portfolio in the United States. But wind is not as efficient as coal or natural gas, causing some concern about its economic impact.

A Purdue University study that models increased wind production in 10 states shows significant economic impact in those states, as well as billions of dollars spread over the rest of the country. Led by Shweta Singh, an assistant professor in the Department of Agricultural and Biological Engineering and in Environmental and Ecological Engineering, a stand-alone academic unit in the College of Engineering, with colleagues at the University of Sydney, the results were published in the March issue of the journal Applied Energy.

“While the impacts are directly felt in the state experiencing the increase in economic activities due to installation of new wind energy generation capacity, the positive economic effects also spill over as shown by the MRIO calculations,” the authors wrote.

The analysis considers the effects of adding 500 megawatts each in 10 different states that produce the most wind energy in the U.S. — Texas, Iowa, Oklahoma, California, Kansas, Illinois, Minnesota, Oregon, Washington and Colorado. The result would be almost $24 billion in economic impact in those states, as well as an additional $3 billion throughout the rest of the United States.

“In states that get new wind energy capacity, we see significant economic impact, but there is also $3 billion that spills over into the other states because there is so much interdependency on products being manufactured there,” Singh said.

The U.S. currently has more than 100,000 MW of operating wind capacity, according to the American Wind Energy Association. Adding 500 MW in 10 states would be only a 5% increase but would have significant economic benefits. 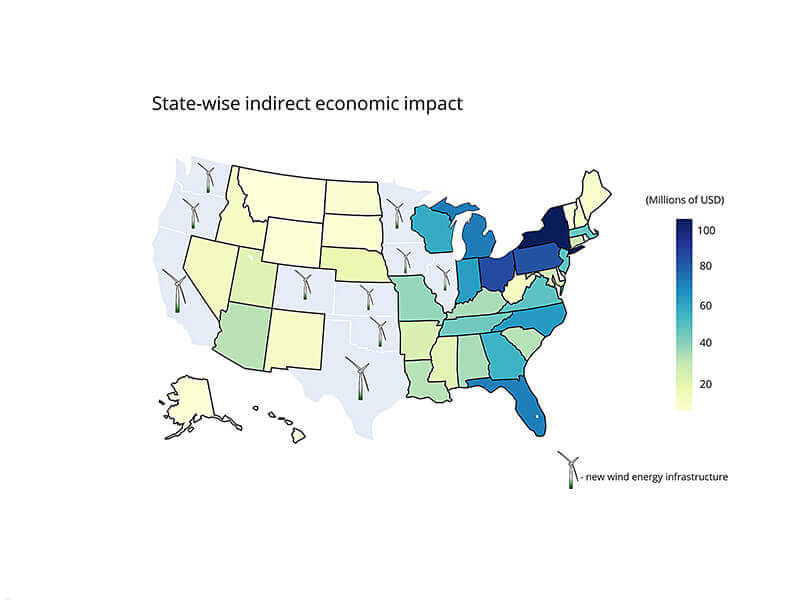 Graduate student Gargyea Vunnava’s analysis was developed using a new USA multi-region input output (MRIO) model that considers how a shock affects not just one segment of the economy, but many interconnected parts and regions. A U.S. MRIO lab has been developed in Singh’s lab using the Industrial Ecology Virtual Lab infrastructure created at the University of Sydney. This is the first MRIO lab created for the United States.

The sectors that would see the most economic benefit would be manufacturing, construction, finance and insurance, transportation and warehousing, and public administration.

“We are so dependent on coal energy because the infrastructure has been built and it’s so cheap,” Singh said. “But this study shows that there is significant economic opportunity from increasing wind energy production, as well as spillover that touches every state and many employment sectors along with long-term impact on reducing greenhouse gas emissions.”

Note to Journalists: Illustrations showing the direct and indirect economic impacts of wind power are available for use on Google Drive.

The share of wind energy in the US energy supply has been steadily increasing in the last two decades. With new wind energy farms being installed in various states of the country, local and multi-regional economic disruptions are bound to take place. The multi-regional economic impacts of installing new wind farms was determined using the US multi-region input-output (US-MRIO) model that has been developed, also called the USLab. Currently, there is a lack of multi-regional impact assessment of wind energy expansion in the US. In this article, we use the US-MRIO to determine regional and sectoral spill-over effects resulted from installation of wind energy farms in 10 US states. The economic impacts were calculated by feeding the USLab with data obtained from the Jobs and Economic Development Impacts (JEDI) Wind model published by National Renewable Energy Laboratory (NREL). The JEDI wind model provides the change in local economic data such as the number of new jobs created and increase of energy-related products in each region in the final demand and value-added. The data about final demand and value-added change was used with the US-MRIO model to account for the multi-regional economic impact across US due to installation of wind energy farms. The year of wind farm installation was set to 2017 and a US-MRIO for 2017 was generated to calculate the economic impact. The total economic impact was found to be 26 billion dollars of which 3 billion dollars was associated with the states where no new wind energy capacity was installed. Installation of new energy production capacity also results in “change in energy consumption” across US. Using the US-MRIO model and the energy intensity of manufacturing sectors, the energy consumption increase due to addition of wind farms was found to be about 6952 trillion of btu for the total change in economic throughput. Primary metal manufacturing and Machinery manufacturing sectors stood out amongst other manufacturing sectors with considerable change in energy consumption with an increase of 3074 trillion of btu and 1537 trillions of btu.