WEST LAFAYETTE, Ind. – Chameleons, salamanders and many toads use stored elastic energy to launch their sticky tongues at unsuspecting insects located up to one-and-a-half body lengths away, catching them within a tenth of a second.

Ramses Martinez, an assistant professor in Purdue’s School of Industrial Engineering and in the Weldon School of Biomedical Engineering in Purdue University’s College of Engineering and other Purdue researchers at the FlexiLab have developed a new class of entirely soft robots and actuators capable of re-creating bioinspired high-powered and high-speed motions using stored elastic energy. These robots are fabricated using stretchable polymers similar to rubber bands, with internal pneumatic channels that expand upon pressurization.

A video about the technology is available at https://youtu.be/trDz4Ukz_VQ. 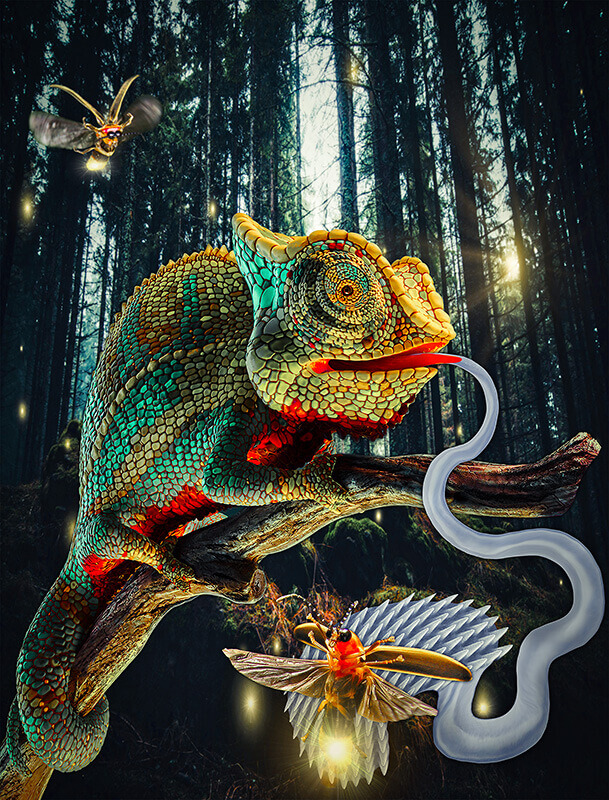 Ramses V. Martinez, an assistant professor at Purdue University, and his students created this cover image. Chameleon tongue strikes inspired the team to create soft robots that catch live insects in the blink of an eye. (Image provided) Download image

The elastic energy of these robots is stored by stretching their body in one or multiple directions during the fabrication process following nature-inspired principles. Similar to the chameleon's tongue strike, a pre-stressed pneumatic soft robot is capable of expanding five times its own length, catch a live fly beetle and retrieve it in just 120 milliseconds.

“We believed that if we could fabricate robots capable of performing such large-amplitude motions at high speed like chameleons, then many automated tasks could be completed more accurately and in a much faster way,” Martinez said. “Conventional robots are usually built using hard and heavy components that slow down their motion due to inertia. We wanted to overcome that challenge.”

This technology is published in the Oct. 25 edition of Advanced Functional Materials. A video showing this insect-catching robot is available at https://bit.ly/2MFGqsj.

Many birds, like the three-toed woodpecker, achieve zero-power perching using the elastic energy stored in the stressed tendons at the back of their legs, allowing them to not fall off a perch when asleep. The anatomy of these birds has served as an example to enable the fabrication of robotic grippers capable of zero power holding up to 100 times their weight and perching upside down from angles of up to 116 degrees. 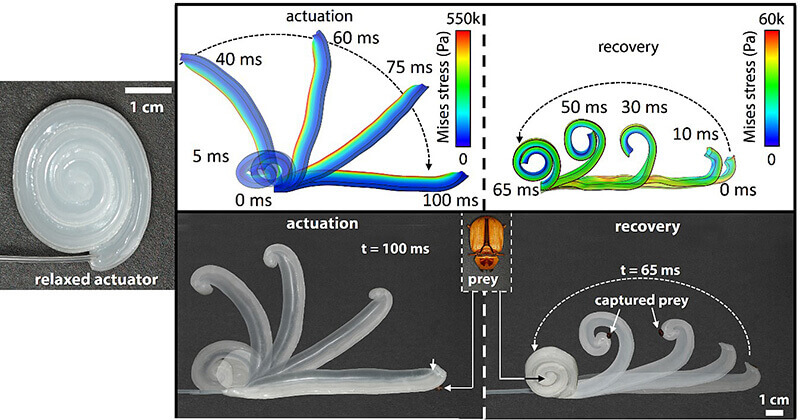 This image shows the work of Purdue University researchers, who were inspired by a chameleon’s tongue to create soft robots able to quickly catch a live flying beetle. (Image provided) Download image

The conformability of the soft arms of these grippers to the gripped object maximizes contact area, enhancing grasping and facilitating high-speed catching and zero-power holding. A video showing how these bird-inspired soft robotic gripper catching a ball moving at 10 millimeters per second in only 65 milliseconds is available at http://bit.ly/35UpN3K. A video showing how these grippers can perch upside down from angles up to 116 degrees is available at http://bit.ly/2MY2ayK.

Martinez said these new pre-stressed soft robots have several significant advantages over existing soft robotic systems. First, they excel at gripping, holding and manipulating a large variety of objects at high speed. They can use the elastic energy stored in their pre-stressed elastomeric layer to hold objects up to 100 times their weight without consuming any external power.

Their soft skin can be easily patterned with anti-slip microspikes, which significantly increases their traction and enables them to perch upside down over prolonged periods of time and facilitates the capture of live prey.

"We envision that the design and fabrication strategies proposed here will pave the way toward a new generation of entirely soft robots capable of harnessing elastic energy to achieve speeds and motions currently inaccessible for existing robots," Martinez said.

Martinez and his team have worked with the Purdue Research Foundation Office of Technology Commercialization to patent some of his technologies related to robots and other design innovations. For more information on licensing a Purdue innovation, contact the Office of Technology Commercialization at otcip@prf.org and mention track code 2019-MART-68473.

The Purdue Research Foundation Office of Technology Commercialization operates one of the most comprehensive technology transfer programs among leading research universities in the U.S. Services provided by this office support the economic development initiatives of Purdue University and benefit the university's academic activities through commercializing, licensing and protecting Purdue intellectual property. The office is managed by the Purdue Research Foundation, which received the 2016 Innovation and Economic Prosperity Universities Award for Innovation from the Association of Public and Land-grant Universities. For more information on licensing a Purdue innovation, connect with the Office of Technology Commercialization at otcip@prf.org. For more information about funding and investment opportunities in startups based on a Purdue innovation, contact the Purdue Foundry at foundry@prf.org.The Purdue Research Foundation is a private, nonprofit foundation created to advance the mission of Purdue University.

Note to Journalists: A YouTube video is available at https://youtu.be/trDz4Ukz_VQ, and other multimedia can be found in a Google Drive folder at http://bit.ly/soft-robots-media.The materials were prepared by Erin Easterling, digital producer for the Purdue College of Engineering, 765-496-3388, easterling@purdue.edu.

Storage of elastic energy is key to increasing the efficiency, speed, and power output of many biological systems. This paper describes a simple design strategy for the rapid fabrication of prestressed soft actuators (PSAs), exploiting elastic energy storage to enhance the capabilities of soft robots. The elastic energy that PSAs store in their prestressed elastomeric layer enables the fabrication of grippers capable of zero-power holding up to 100 times their weight and perching upside down from angles of up to 116°. The direction and magnitude of the force used to prestress the elastomeric layer can be controlled not only to define the final shape of the PSA but also to program its actuation sequence. Additionally, the release of the elastic energy stored by PSAs causes their high-speed recovery (≈50 ms), which significantly improves the actuation rates of soft pneumatic actuators, especially after motions requiring large deformations. Moreover, judicious prestressing of PSAs can also create bistable soft robotic systems which use their stored elastic energy as a source of power amplification for rapid movements. These strategies serve as a basis for a new class of entirely soft robots capable of recreating bioinspired high-powered and high-speed motions using stored elastic energy.