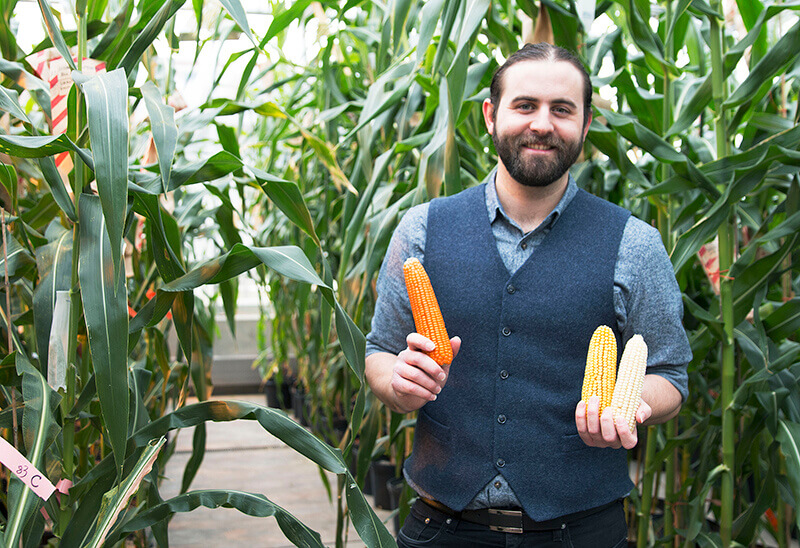 Evan Rocheford, chief executive officer of NutraMaize LLC, holds up orange corn along with ears of yellow and white corn. The orange corn was developed by his father, Torbert Rocheford, the Patterson Endowed Chair in Translational Genomics for Crop Improvement in the Purdue Colege of Agriculture’s Department of Agronomy through a process known as biofortification to naturally increase the amount of provitamin A carotenoids in corn. (Purdue Research Foundation image/Hope Sale) Download image

Torbert Rocheford, the Patterson Endowed Chair in Translational Genomics for Crop Improvement in the Purdue College of Agriculture’s Department of Agronomy , used a process known as biofortification to naturally increase the amount of antioxidant carotenoids in corn, making the corn more nutritious, and creating a deep orange color. The human body converts certain provitamin A carotenoids, such as beta-carotene, into vitamin A, an essential vitamin that promotes eye health and supports the immune system.

“The project began as part of an ongoing humanitarian effort called HarvestPlus to improve nutrition in developing countries,” said Rocheford, who began working on naturally increasing the amount of health benefiting carotenoids in corn over 20 years ago.  He did not originally plan to market the orange corn in the United States. However, when orange corn varieties were introduced in Africa, some began to ask if it was grown and consumed in the U.S. When they were told it wasn’t, some were skeptical, questioning “if it is so good, why don’t American’s eat it?”

“So, I decided to grow some here and share it. The response was overwhelmingly positive. I had people tell me that the orange corn made the best grits and cornbread they had ever eaten. So I thought it made a lot of sense to offer it to Americans, especially since it might help encourage adoption in Africa.”

Rocheford and his son, Evan, co-founded NutraMaize to commercialize the corn in the U.S. NutraMaize is marketing the corn under the brand name “Professor Torbert’s Orange Corn,” and it is available at ProfessorTorberts.com. A video about the corn can be viewed here.

“The name of the product is a homage to my father’s lifelong dedication to improving the world through science and agriculture,” said Evan Rocheford, NutraMaize CEO.

The bright orange corn, derived from varieties that originated in South America and the Caribbean, is not the variety eaten off the cob. Rather, it is milled to make products such as cornmeal, grits and polenta.

“People have described our corn products as having a rich, kind of nutty, buttery flavor,” Evan Rocheford said.

Torbert Rocheford developed the orange corn using traditional breeding techniques, rather than genetic modification, making it a non-GMO product. The orange color of the corn comes from natural plant pigments called carotenoids, which are the same family of compounds that give carrots their orange color. Carotenoids naturally occur in corn, but the low concentrations are typically only enough to produce a pale yellow color.

“Although it sounds like a relatively simple idea, it's actually quite revolutionary when it comes to a staple crop like corn,” Evan Rocheford said. “We are actively breeding and developing varieties that speak to the two qualities consumers care about most: taste and nutrition.”

Because corn is used in a wide variety of popular food formats in the U.S., including tortillas, chips, and cereals, improving the carotenoid content of corn provides an opportunity to significantly increase the amount of the beneficial antioxidants Americans consume without changing consumers' eating habits, Torbert Rocheford said.

Long-term, NutraMaize plans to sell its corn as an ingredient to food processors that produce widely consumed products like breakfast cereals and snack foods.

The startup company has received a Small Business Technology Transfer Research from the National Science Foundation, a Small Business Innovation Research from the USDA, and matching grants from the state of Indiana, totaling about $425,000. Before NutraMaize licensed the technology, Torbert Rocheford’s lab also received a $25,000 grant from the Purdue Research Foundation-managed Trask Innovation Fund, an endowed development fund to assist faculty and staff whose discoveries are commercialized through the Purdue Office of Technology Commercialization.

The orange corn is licensed through the Purdue Office of Technology Commercialization and the startup also received assistance in developing a business plan and seeking grants from the Purdue Foundry, an entrepreneurship and commercialization accelerator in Discovery Park's Burton D. Morgan Center for Entrepreneurship, as well as assistance from the State of Indiana SBIR/STTR Program.

“When it comes to supporting innovation and economic development, Purdue University and the state of Indiana really put their money where their mouth is,” Evan Rocheford said. “Having a support network like this really makes a huge difference when you’re trying to build a company from scratch. We are proud to call ourselves a Purdue Foundry startup and call Indiana home.”

HarvestPlus is developing and promoting new, more nutritious varieties of staple food crops with higher amounts of vitamin A, iron or zinc — three of the micronutrients identified by the World Health Organization as most lacking in diets globally. The process is known as biofortification — and regular consumption of these innovative crops is improving nutrition and public health.