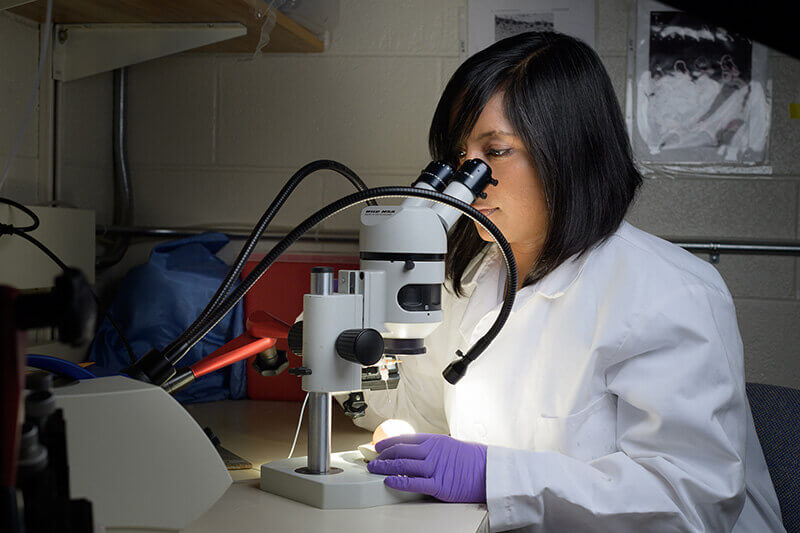 Ankita Thawani, a graduate student in the Fekete lab, looks into a chicken embryo with a microscope. (Purdue University photo/John Underwood) Download image

WEST LAFAYETTE, Ind. — Zika prefers certain “hot spots” in the brains of chicken embryos, offering insight into how brain development is affected by the virus.

If the virus also prefers specific sites in human brains, researchers could look to them for targeted therapies and drug testing.

“When the virus was delivered directly into the middle of the brain, which is the area primarily infected by Zika in the developmental progress of human babies, we didn’t see infection evenly throughout the brain,” said Donna Fekete, director of Purdue University’s Institute for Integrative Neuroscience. “We saw hot spots of infection, and those spots are really important signaling centers in the patterning of the brain.”

This means many cells in the brain could be affected by Zika non-directly. Because the cells the virus is preferentially drawn to are key players in development, damage could be widespread without directly affecting many cells.

If there are also hot spots of infection in human brains, this research could help scientists find targeted, direct therapeutics for complications associated with Zika virus. It could also make drug testing easier, as they would have to check only a few sites for infection. Those sites could also give researchers a target population to study closer and potentially find out what the receptor for the virus might be.

Zika was injected into the neural tube of two-day-old chicken embryos, which are in a developmental stage comparable to the early fourth week of a human fetus, resulting in infection of hot spots three days later. This is relatively fast compared to other animal models, which have brains that take weeks or months to form.

Richard Kuhn, director of Purdue’s Institute for Inflammation, Immunology and Infectious Disease, graduate student Ankita Thawani, and post-doctoral researcher Devika Sirohi collaborated with Fekete on this research. It was supported by Purdue University and National Institutes of Health grants R21DC016732 and R01AI073755.

of the embryonic chicken brain

Zika virus (ZIKV) is associated with severe neurodevelopmental impairments in human fetuses, including microencephaly. Previous reports examining neural progenitor tropism of ZIKV in organoid and animal models did not address whether the virus infects all neural progenitors uniformly. To explore this, ZIKV was injected into the neural tube of 2-day-old chicken embryos, resulting in non-uniform periventricular infection 3 days later. Recurrent foci of intense infection were present at specific signaling centers that influence neuroepithelial patterning at a distance through secretion of morphogens. ZIKV infection reduced transcript levels for 3 morphogens, Shh, Bmp7, and Fgf8, expressed at the midbrain basal plate, hypothalamic floor plate, and isthmus, respectively. Levels of Patched1, a Shh-pathway downstream gene, were also reduced and a Shh-dependent cell population in the ventral midbrain was shifted in position. Thus, the diminishment of signaling centers through ZIKV-mediated apoptosis may yield broader, non-cell autonomous changes in brain patterning.