Switch controls light on a nanoscale for faster information processing 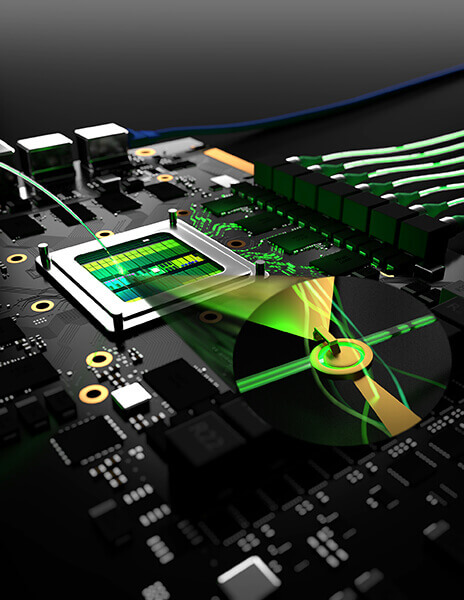 This artistic rendering magnifies a switch researchers have developed within a computer chip to control for loss of photons when light is reduced to a nanoscale. (Virginia Commonwealth University image/Nathaniel Kinsey) Download image

It’s well known that photons, or units of light, are faster than electrons and could, therefore, process information faster from smaller chip structures. A switch designed in collaboration with researchers from ETH Zürich, the University of Washington and Virginia Commonwealth University bypasses a tendency for the unwanted absorption of light when using so-called surface plasmons, or light coupled to oscillations of free electron clouds, to help confine light to a nanoscale.

“The big idea behind this is going from electronic circuitry to photonic circuitry,” said Vladimir Shalaev, Purdue’s Bob and Anne Burnett Distinguished Professor of Electrical and Computer Engineering. “From electronics to photonics, you need some structures that confine light to be put into very small areas. And plasmonics seems to be the solution.”

Even though plasmonics downsizes light, photons also get lost, or absorbed, rather than transferred to other parts of the computer chip when they interact with plasmons.

“When you have a purely plasmonic device, light can be lossy, but in this case it’s a gain for us because it reduces a signal when necessary,” said Soham Saha, a graduate research assistant in Purdue’s school of electrical and computer engineering. “The idea is to select when you want loss and when you don’t.”

The loss creates a contrast between on and off states, thus better enabling control over the direction of light where appropriate for processing bits of information. A plasmon-assisted ring modulator also results in a smaller “footprint” because plasmons enable confinement of light down to nanoscale chip structures, Shalaev said.

“Supercomputers already contain both electronic and optical components to do massive calculations very fast,” said Alexandra Boltasseva, Purdue professor of electrical and computer engineering, whose lab specializes in plasmonic materials. “What we’re working on would fit very well into this hybrid model, so we don’t have to wait to use it when computer chips go all-optical.”

Development of the plasmon assisted electro-optic modulator required expertise in not only plasmonics, but also integrated circuitry and nanophotonics from the leading group of Juerg Leuthold at ETH Zürich – including Christian Haffner and other group members – and in opto-electronic switching materials from Larry Dalton’s group at the University of Washington. Haffner and Nathaniel Kinsey, former Purdue student and now a professor of electrical and computer engineering at Virginia Commonwealth University, along with Leuthold, Shalaev and Boltasseva, conceived the idea of a low-loss plasmon assisted electro-optic modulator for subwavelength optical devices,  including compact on-chip sensing and communications technologies.

For nearly two decades, researchers in the field of plasmonics— which studies the coupling of electromagnetic waves to the motion of free electrons near the surface of a metal—have sought to realize subwavelength optical devices for information technology, sensing, nonlinear optics, optical nanotweezers and biomedical applications. However, the electron motion generates heat through ohmic losses. Although this heat is desirable for some applications such as photo-thermal therapy, it is a disadvantage in plasmonic devices for sensing and information technology and has led to a widespread view that plasmonics is too lossy to be practical. Here we demonstrate that the ohmic losses can be bypassed by using ‘resonant switching’. In the proposed approach, light is coupled to the lossy surface plasmon polaritons only in the device’s off state (in resonance) in which attenuation is desired, to ensure large extinction ratios between the on and off states and allow subpicosecond switching. In the on state (out of resonance), destructive interference prevents the light from coupling to the lossy plasmonic section of a device. To validate the approach, we fabricated a plasmonic electro-optic ring modulator. The experiments confirm that low on-chip optical losses, operation at over 100 gigahertz, good energy efficiency, low thermal drift and a compact footprint can be combined in a single device. Our result illustrates that plasmonics has the potential to enable fast, compact on-chip sensing and communications technologies.